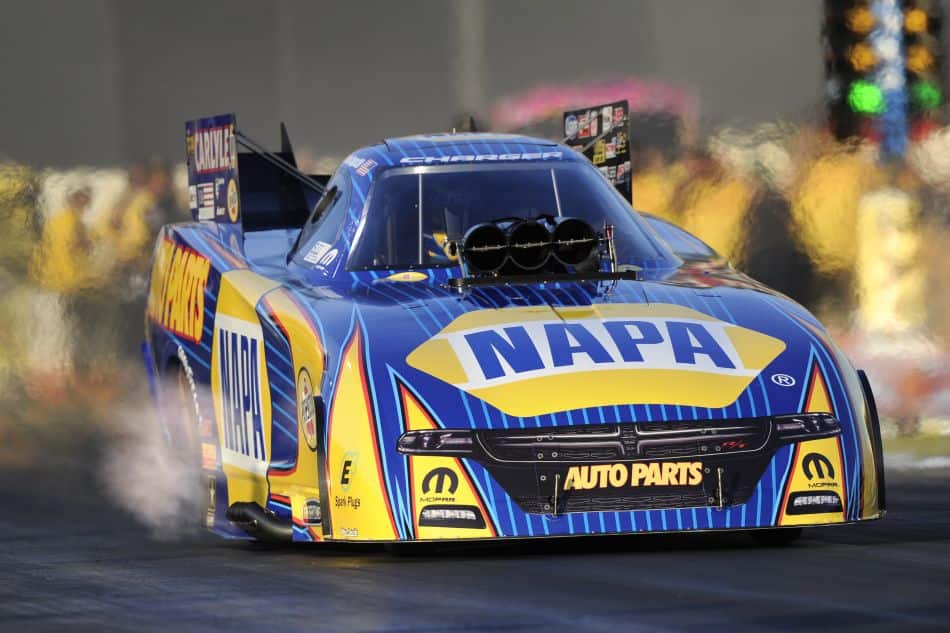 Fans often complain about dominant teams “stinking up the show.” NASCAR fans levy that charge at big money operations like Hendrick Motorsports or Joe Gibbs Racing. It happens in drag racing too, with the same complaint many times directed at Don Schumacher Racing or John Force Racing. JFR has gotten off to a solid start this season, but things seem a little off at DSR.

None of the team’s Top Fuel entries have made much noise this season. Antron Brown, the defending champion is currently mired in 10th in points. Teammate Tony Schumacher is doing the best but it’s not that much better, sitting in eighth and already trailing early points leader Brittany Force by 96 markers. None of them have made it out of the second round of eliminations yet, and Shawn Langdon has yet to get past the first round. Sure, we’re only three races in, but it’s still highly unusual for this team.

Ron Capps is doing all right on the Funny Car side. He’s already gotten a win and a runner up in three outings this year. Jack Beckman made his presence known in Gainesville before bowing out to Capps in the semifinals and he’s run well in qualifying, scoring two No. 1 qualifiers so far. Matt Hagan and Tommy Johnson, Jr., however, are faring about as well as their Top Fuel counterparts.

This is DSR, however, and I’m sure they’re burning the midnight oil to right the ship, so I wouldn’t expect this malaise to last forever. The side effect while it does though, along with Kalitta Motorsports having similar issues, is a host of fresh faces like Leah Pritchett, Clay Millican and Terry McMillen contending in the late rounds.

* Bob Tasca III announced that Tasca Racing will return to NHRA Mello Yello Series Funny Car action for four events this year. Tasca will race at the Four-Wide Nationals in Charlotte, his first appearance for the season, as well as at Topeka, Epping, and Chicago.

* Still not getting enough NHRA coverage on race weekend? Want to see Pro Mods and Sportsman without having to wait for a tape delayed show? Beginning with the Gatornationals last weekend, NHRA is now offering NHRA All Access, a premium streaming service that costs $99.95 per season. What you get for your money is all-day video coverage on Friday, Saturday, and Sunday for every NHRA Mello Yello Drag Racing Series event featuring in-venue announcing and video feed.

* Voting for the final spot for the K&N Horsepower Challenge for Pro Stock drivers closes at 11:59 PM PT this Sunday, March 27. If you have not yet voted for your favorite driver, you can do so at http://www.nhra.com/knhpchallenge.aspx. Eligible drivers include Bo Butner, Jeg Coughlin, Jr., Kenny Delco, V. Gaines, Joey Grose, Matt Hartford, Jeff Isbell, Deric Kramer, Alex Laughlin, Larry Morgan, Vincent Nobile, Alan Prusiensky, and Aaron Strong. 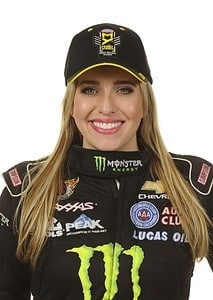 2015 – Runner up at Englishtown and Brainerd; No. 1 qualifier at Reading; qualified for second championship Countdown and finished a career high seventh in points.

2014 – Four runner up finishes; three time No. 1 qualifier; qualified for her first ever Countdown to the Championship.

Some things most people don’t know about Brittany: Brittany and her sister Courtney were responsible for pursuing and landing her current sponsorship deal with Monster Energy. She didn’t really plan to run in the Mello Yello Series, let alone in a Top Fuel car. Brittany was running in a Top Alcohol dragster in the Lucas Oil Series and was content to stay there when she got the opportunity to test in a Top Fuel car, something she’d always considered crazy and way too fast. Force says she will always try something once, so she couldn’t pass up the opportunity. It took just one full pass to make her change her plans and pursue Top Fuel. She also said the category was attractive because it was different.

“We’ve only done Funny Cars. That’s all we’ve ever known. So I thought it would be something exciting and it’s been a challenge bringing a Top Fuel car into our pits, because we’ve only known Funny Cars,” she says. “It’s something new. It’s exciting.”

NHRA J&A Service Pro Mod Series driver Dan Stevenson had a scary moment last weekend at the Gatornationals when his car caught fire during a qualifying run. NHRA’s Safety Safari got to the car quickly and Stevenson got out under his own power. He was checked at the track and sent to the local hospital for observation but did not suffer any serious injuries. His car didn’t fare nearly as well, however.

Word of the Week:Elapsed Time

OK, technically that’s two words. Elapsed Time, otherwise known as E.T., is the amount of time it takes a car to make a run from starting line to finish line. The clock starts as soon as a car rolls through the timing beam leaving the starting line and stops as soon as the beam at the finish line is tripped.

NHRA will take a pause this weekend before heading out to Las Vegas April 1-3 for the Denso Spark Plugs NHRA Nationals at The Strip at Las Vegas Motor Speedway.