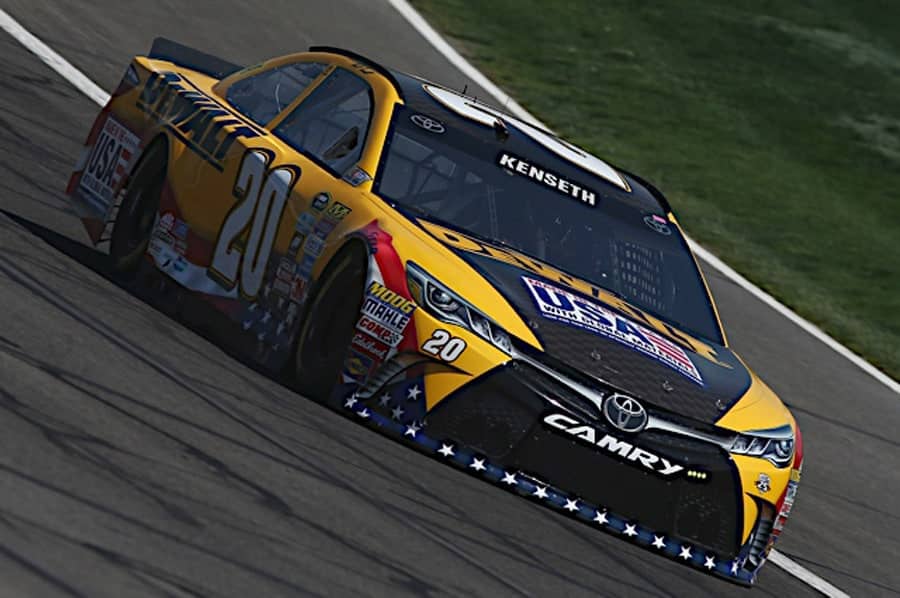 With this now the third year of the elimination Chase-style format, it’s easy to forget how early we still are in the 2016 NASCAR Sprint Cup Series.

Four winners in five races (Jimmie Johnson has managed to notch two victories) means that there are four drivers who are all but locked into the Chase once it begins in the fall. None of them, however, are any surprise.

Denny Hamlin – the Daytona 500 winner – won twice last season and Joe Gibbs Racing as a whole was expected to continue their dominance this year after winning the championship with Kyle Busch in 2015. Brad Keselowski’s win at Las Vegas may have been his first in almost a year, but it was more surprising that it had taken so long to win another race at all. And who can argue with Kevin Harvick, who won the championship in the 2014 and finished runner-up last year?

Of course, if you look at the winners in the first five races last season, you may disagree. Joey Logano, Johnson, Harvick, and Keselowski all won the first five races of 2015. Logano went on to win five more races and could have realistically won the championship if not for a couple of … “unfortunate” … races toward the end of the Chase. Johnson won four more races and also could have contended for the championship without his own misfortunes. Again, Harvick finished second in the standings. Keselowski only won the one race, but he finished seventh and arguably could have won more. But for whatever reason, that didn’t happen.

No one would be surprised to see the four current winners racing for the title in Homestead in November. But there are several other drivers who will have something to say about that, most notably some of the other winners from last season. With this first off week of the season, what better time to ponder what last year’s winners will contribute to this year’s Chase and ultimate champion?

Joey Logano (6 wins in 2015) – It’s not every year that the Daytona 500 champion winds up being one of the toughest competitors for the rest of the season, but that’s exactly what Logano and his No. 22 Team Penske team were able to do. Those six trips to Victory Lane were tops of any driver, including eventual champion Kyle Busch.

Winless so far in the first five races of 2016, Logano’s performance this year seems to indicate a matter of “when” – not “if” – he will return to Victory Lane. Though Team Penske seems to be missing just a little bit of the magic that they had last year, Logano’s two top fives and three top 10s have to translate to a victory eventually.

Wouldn’t it be interesting if that win comes next week at Martinsville, the track where his championship chances virtually ended last season via a TKO from Matt Kenseth? Sure, a blown tire the next week at Texas didn’t help anything, but let’s not forget that Logano was leading at Martinsville when the crash heard ‘round the world happened. He could realistically win this coming weekend at the same track.

Then again, Logano has already ruffled some feathers this season, and it’s unlikely some of his other competitors will give him very much room to work with at the track affectionately known as the paper clip. We shall see.

Matt Kenseth (5) – Speaking of Kenseth … he may have been the one to effectively kill Logano’s championship chances, but that’s because Logano ended Kenseth’s first (whether intentional or not we may never know). With that said, Kenseth’s suspension last season following the Martinsville incident had little effect on the No. 20 team heading into 2016.

For whatever reason, though, the bad luck that plagued Kenseth in the Chase last year (before the two drivers tangled) hasn’t since let up. Kenseth only has one top 10 in the first five races, but has led laps in all but one. He was leading coming out of turn four at the Daytona 500 but contact from teammate Denny Hamlin prevented the win.

A miscommunication (or lack of communication) at Atlanta regarding a pit road penalty kept Kenseth out of what, at the time, looked to be a surefire trip to Victory Lane. A wreck in Vegas that started with the No. 20 car getting loose ended a top-five run. Phoenix was the lone top 10 of the year, featuring a seventh-place finish and Fontana was a disappointing 15th.

It’s not likely Kenseth will continue these poor and lackluster results through the end of the season, especially considering that his teammates have been strong too. He just has to hope that he shakes off whatever it is that is plaguing this team from showing their true potential.

Kurt Busch (2) – Where teammate Kevin Harvick has continued to shine brightly, Busch has always been just a tick behind. Capable of leading laps and winning races, Busch seems to always be there waiting in the wings but doesn’t have the dominance that has Harvick in or near Victory Lane so often.

Busch has one top five and four top 10s, along with 93 laps led this season. It certainly isn’t from a lack of trying that Busch hasn’t won a race yet, and it’s likely that he will at least match his two victories from 2015. Where and when those will come is another matter entirely. Busch has solid results at many of the upcoming tracks. In fact, there isn’t a track where it would be surprising to see him win.

It was consistency and determination that kept Busch in the championship picture for much of the season last year. Through the first five races of 2016, he has shown the same traits and characteristics. With a lot fewer of the negative headlines we have seen in the past.

Dale Earnhardt Jr. (3) – Hopes were high for Earnhardt in 2016. Three wins, an 11th-place average finish, and 16 top fives in 2015 gave Junior Nation every reason to be optimistic for this season. Though he wasn’t able to win the Daytona 500, the No. 88 already has some very good numbers in 2016.

Two top fives and three top 10s this season already has Earnhardt on everyone’s radar. Aside from the Daytona 500, where a crash relegated him to 36th, his worse finish of the season is 11th. His performance is right on par with teammate Johnson’s (aside from the victories of course) and a victory for Earnhardt has to be just around the corner.

The obvious place to look for his first win is Talladega, considering that Earnhardt is known more for his restrictor plate prowess than anything else. However, he won at Martinsville in 2014 and has respectable statistics at many of the intermediate racetracks that are coming up on the schedule.

Carl Edwards (2) – Like Earnhardt, Edwards had a solid 2015 season, but is hoping for a great one in 2016. Already, he has taken great strides in doing so. Three top fives and four top 10s in the first five races, including a photo finish loss at Phoenix, has put Edwards so close to a win that he can taste it.

His 75 laps led, though, is slightly disappointing considering that 65 of those came at the aforementioned Phoenix. Edwards needs to spend more time actually leading laps if he’s going to make it to Victory Lane. Again, though, JGR has to get their act together this season, and Edwards is likely going to win a race here shortly if he keeps up with this current trend.

Now, where will that happen? It’s hard to say.

Edwards’ strengths in the past have been intermediates, but he has credited his teammates – especially Hamlin – in helping him improve his short tracks skills, especially at Martinsville. Perhaps Edwards’ move to JGR has helped him become a better short track driver, but it’s still more likely his first win of the season will come at one of the larger tracks.

Martin Truex Jr. (1) – This Cinderella story is now so commonplace, it’s almost not a Cinderella story anymore. What once used to be considered an underdog team is now a threat to win every week. So does that mean that Truex will improve upon his single-victory season last year, or will this team just be a one-hit wonder?

It’s probable that Truex will at least get one win this year, but the way he and crew chief Cole Pearn are talking, they haven’t even reached their full potential as a team this year. A switch in manufacturers this year – from Chevrolet to Toyota – supposedly put a strain on this team and they felt like they started the season from behind.

If that’s the case, this team will most certainly win more than one race. One top five, two top 10s and three top 15s certainly shows room for improvement. But it definitely doesn’t speak to a team that is struggling. Instead, this team is likely going to once again be a factor in this year’s title.

The defending Sprint Cup Series champion hasn’t won a race yet this year, but considering that last week at Fontana was the first time he’d finished outside the top five all season, that’s not going to last long. Busch would have continued that streak at Fontana, but his right front tire blew on the final lap for the second time in the same weekend.

No one is really surprised to see Busch essentially pick up right where he left off last season, but talk about hot right out of the gate! And unless lightning strikes twice and he winds up missing part of the season again (doubtful and highly unlikely), the competition is going to have to deal with him the rest of the year.

Should be fun to watch.

…..And of course the rain shortened race at Phoenix of which he was running 3rd. That BS with many competitors placements on the line should not have happened. Logistics or not, too important with this insanely stupid format to “call it”. One in particular benefitted mightily by the called rain race. It fit in perfectly with the “feel good story” of the year, the universe and beyond, according to NASCAR and the swillers. SMH. More show than logic, or truth.

Whaddaya know………..more bitchin about the same ol’ shit. SMH, BMHATW. If it bugs you so damn much, please take up gardening or something else…………………………

Does the term “brown thumb” mean anything to you?