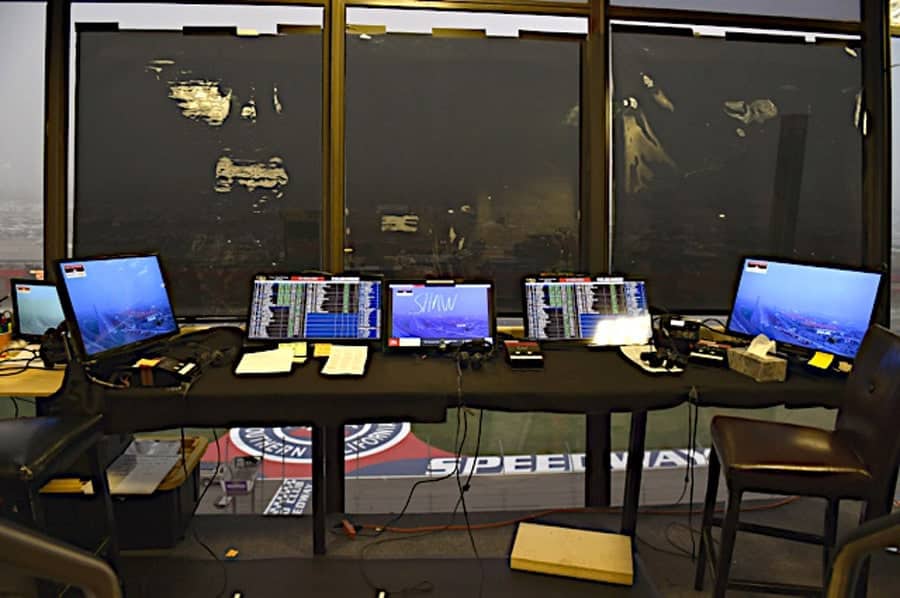 Welcome back, everybody.  I hope you enjoyed Easter weekend.  Much like many of you reading this article, I spent time with my family and relaxed.  I also watched a couple of old-school races on YouTube to kill time.  One of them may be critiqued for a future edition of the Critic’s Annex in the Frontstretch Newsletter.

Speaking of our newsletter, today’s critique is going to be a little different.  With no Sprint Cup, XFINITY, Camping World Truck or Verizon IndyCar Series action to critique, we’re going a little further down the line.  Friday night saw NBCSN premiere tape-delayed coverage of the Toyota/NAPA Auto Parts 150 at Irwindale Speedway, the season opener for the K&N Pro Series West.  This race was held a couple of hours after the XFINITY Series’ TreatMyClot.com 300 wrapped up at Fontana’s Auto Club Speedway.  According to Google Maps, it’s a 45-minute drive (once you get off the property in Fontana), so it’s conceivable to have hit up both races.

Normally, such a race would be covered in the Critic’s Annex.  However, given last weekend’s setup, I figured that this would be as good a time as any to give the smaller guys their due.

Today, K&N Pro Series West races air as tape-delayed one hour telecasts up to two weeks after the race is run (in this case, it was six days after the race), which has been the norm since about 2013.  Some races are more chopped up than others.  The Irwindale race ran for 69 minutes and had to be chopped down to approximately 39 to fit in the slot, along with pre-race and post-race coverage.  As a result, it did feel a little disjointed at times.

For TV personalities, K&N Pro Series races on NBCSN tend to have a revolving door of on-air talent.  In the case of the Irwindale broadcast, you have Dave Burns on play-by-play.  Burns has roughly 20 years of on-air experience in motorsports, starting with ASA coverage on TNN before moving to NBC/Turner Sports in 2001, then ESPN.  He’s grown into a consistently solid on-air personality in that time.

Burns’ booth experience is somewhat limited, but ESPN did give him a few chances in the booth for then-Nationwide Series standalone races.  For what it’s worth, I thought he was better at the time than Vince Welch, who now has a regular play-by-play gig on FOX Sports 1.

Burns is joined by Parker Kligerman, the current points leader in the Camping World Truck Series.  Since the “restructuring” of Swan Racing in 2014 structured Kligerman right out of a job, he’s created a little TV career for himself.  Kligerman is currently a regular analyst on NBCSN’s NASCAR America, has worked as a pit reporter on practice telecasts and generally acquits himself well.

In the pits is Heather Debeaux, entering her third season (second full year) working the pits for K&N Pro Series West races (and the occasional East race).  After replacing Bernadette Sanicola midway through the 2014 season, Debeaux has generally worked very hard to bring information to viewers.  I believe that she does well with what she’s given, although depending on the track, it may be very hard to hear her.  Here, she provided a good amount of information for viewers and a good in-race interview with Blaine Rocha after Rocha blew a tire and crashed out of the race.

The Irwindale broadcast started out with a quick look back at the 2015 season.  Former Camping World Truck Series competitor Chris Eggleston beat out Noah Gragson for the title by a mere seven points in a spirited battle.  There was also a piece where Debeaux interviewed Chase Elliott, who made a guest appearance in the pits after the XFINITY race.  Elliott talked about the benefits of racing in the K&N Pro Series (admittedly, most of Elliott’s experience was in K&N East; he has only three K&N West starts, all of which were at Phoenix).

On this level of motorsports, the big name out there recently has been Todd Gilliland, son of David and grandson of Butch.  Until someone gets around to beating him, Todd will be one of the big stories of every race he competes in.  This particular event was no exception.  During the race, NBCSN did a short piece where they let Gilliland talk about himself.  Here, Gilliland talked about trying to bring his momentum from last year along for the ride, but kept his goals relatively modest for 2016.  I think he’s capable of a lot more than just running all the laps this year, but you never know with all of the bullrings that he’ll be competing on.  Plus, the three road races will be a bit of an unknown for the youngster.  He’ll be able to lean on his father for advice at Sonoma, but he’ll be on his own for the doubleheader at the Utah Motorsports Campus (formerly Miller Motorsports Park).

Also, I know that this has nothing to do with the race itself or TV, but I should stress here that this is a TV critique, namely that the broadcast on NBCSN is the focus here, not Gilliland.  I critiqued the broadcast of the ARCA race in Toledo last year that Gilliland won on debut as part of The Critic’s Annex and got a nasty e-mail from someone claiming to be a relative of Gilliland’s saying that I was downplaying his accomplishments.  I’m not.  Todd Gilliland is not the focus of this article–nor is any other driver.

Early on, Burns and Kligerman stressed tire maintenance, and for good reason.  Tire rules in the K&N Pro Series tend to vary from track to track and week to week.  For example, last weekend’s K&N Pro Series East Kevin Whitaker Chevrolet 150 at Greenville-Pickens Speedway (which will air Saturday on NBCSN) had a halftime break where a four-tire change was permitted.  At Irwindale, there was no halftime break and unless something happened, you were expected to qualify and race all 150 laps on the same tires.  Given the configuration of Irwindale Speedway (progressive banking on tap), drivers would need to adjust their lines in order to make the tires last.  It’s a good skill for the seemingly never-ending parade of young ‘uns in the series these days to learn as they progress up through the ranks.

The latter setup is more likely to be the case out west because a lot of the races are on real bullrings, like Stateline and Meridian Speedways in Idaho, Colorado National Speedway, and Orange Show Speedway in Southern California.  Three of those tracks are a mere quarter-mile long.  Two more quarter-miles have held races in recent years (Havasu 95 Speedway and Stockton 99 Speedway), but are not on the schedule this season.

Even in short track races, zooming in too far can hurt a broadcast.  The Irwindale telecast was no exception.  Gracin Raz was running in second just after halfway when he bashed the wall in turn 4.  NBCSN’s cameras were focused on a battle for fourth between Gragson and Bill McAnally Racing teammates Eggleston and Riley Herbst.  The camera on top of the press box was zoomed in real tight and missed what happened to Raz.  Viewers just saw Raz’s smoking No. 27 beating up his Five-Star body against the concrete.  The situation left Burns and Kligerman to speculate on the situation, but we never got a definitive answer as to what the heck happened.  To be fair, Raz’s crew didn’t really know either (according to Debeaux).

My takeaway from watching this race is that I really like Kligerman as a race analyst.  He’s got a smooth style and can easily bring in his knowledge about certain venues to help the broadcast.  Now, Kligerman never raced in either K&N East or West, but his ARCA experience helps quite a bit.  He had to go from an open-wheeled USAC Sprint car to a full bodied stock car.  It was a bit of a learning experience for him.  For someone that really just fell into TV, I feel that Kligerman does a good job.  I’ve felt that way ever since I watched last year’s Bill Schmitt Memorial 150 from Shasta Speedway.  He also works really well with Burns.  You can tell that they have a quite the rapport and enjoy each other’s company.  Conflict in a booth can hurt a telecast.  You don’t have that here.

Post-race coverage was about par for the course when it comes to K&N Pro Series broadcasts. Viewers got interviews with the top 3 finishers (Todd Gilliland, Ryan Partridge and Eggleston) and checks of the unofficial results and points.  The booth thought Partridge’s interview was interesting because 1) He was quite bummed with finishing second and 2) He thought he needed more grip in the lower groove.  Let’s face it, no one had more grip down low in this race than Ryan Partridge did.

Overall, I thought that the telecast was decent, but was hamstrung by the production values.  There’s only so many cameras to go around.  As a result, a couple of the replays were from the speed shot on the frontstretch.  I critique on a 32” TV, so that’s a little tough on me.  Had to squint quite a bit.  Also, the low number of cameras does make it hard to catch everything.  Burns and Kligerman were likely calling this race from a studio in Connecticut, so it’s rather difficult to react naturally to the goings-on.  However, that’s a common problem with tape delayed races in general.

That’s all for this week.  Next week, the grind returns as the Sprint Cup and Camping World Truck Series return back to action in Martinsville, while INDYCAR returns to Phoenix for the first time since 2005.  Listings are in the TV Schedule tab.

I will provide critiques of the Sprint Cup, Camping World Truck and Verizon IndyCar Series races in next week’s edition of Couch Potato Tuesday here at Frontstretch.  The Critic’s Annex will cover a combination of the Sebring 150 from Sebring International Raceway and NBCSN’s look at the Haas F1 Team.

If you have a gripe with me, or just want to say something about my critique, feel free to post in the comments below.  Even though I can’t always respond, I do read your comments and I’m happy with the increased number of comments so far this year. Also, if you want to “like” me on Facebook or follow me on Twitter, please click on the appropriate icons. If you would like to contact either of NASCAR’s media partners, click on either of the links below.