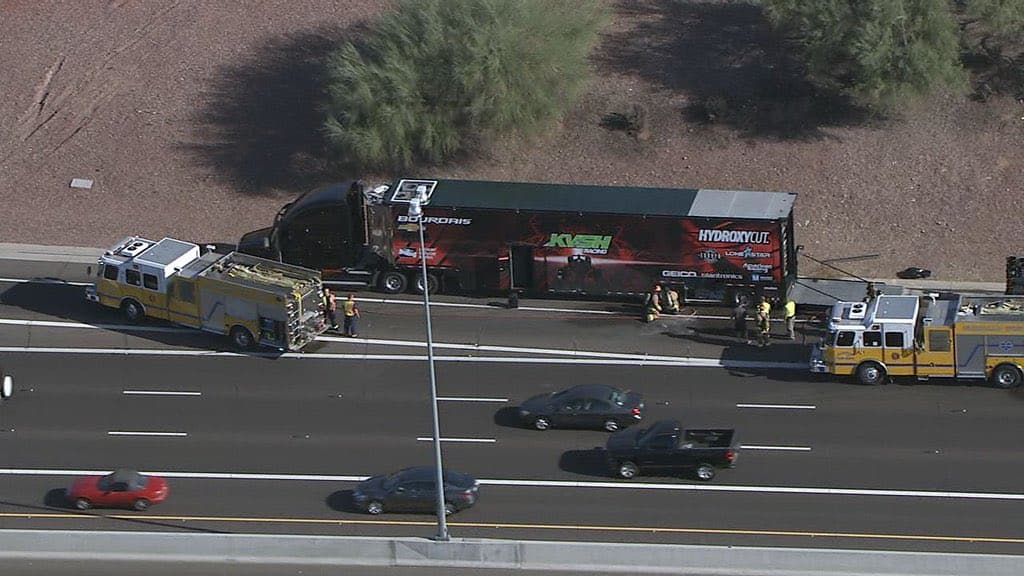 The one-car Verizon IndyCar Series team’s transporter caught fire while en-route to Phoenix International Raceway. Included in the transporter were team equipment, as well as the Dallara IR-12 driven by Sebastien Bourdais.

What does everyone think about our new ~Red Hot~ transporter???? (we promise the smoke was only a temporary effect) pic.twitter.com/U5gEKpUFno

While the sudden sharing of the news on social media led some to worry about the state of the equipment inside the transporter, it appears the freight all survived the incident undamaged. Thanks to the fire quickly being dispatched, the transporter was the only victim of the blaze. All equipment and crew members on-board were unhurt, per a team release.

“The good news is that both of our team members, John Phil Davis and Eric ‘Stu’ Stewart, were uninjured,” said KVSH Racing General Manager Steve Moore in the release. “Secondarily, the cars and equipment are undamaged.

“We are very fortunate to have to highly skilled and experienced transportation professionals who took quick and decisive action. Without them this situation could have been a lot worse. KVSH Racing would also like to thank the members of other teams and local Fire and Police responders for their assistance.”

Further on, the team indicated that they’re attempting to determine “alternative logistics to support this weekend’s effort.”

Barring further issues, KVSH Racing will join the rest of the IndyCar paddock in this weekend’s Desert Diamond West Valley Phoenix Grand Prix. The event will being at 8:30 p.m. ET, with live coverage courtesy of IndyCar Radio and NBCSN.