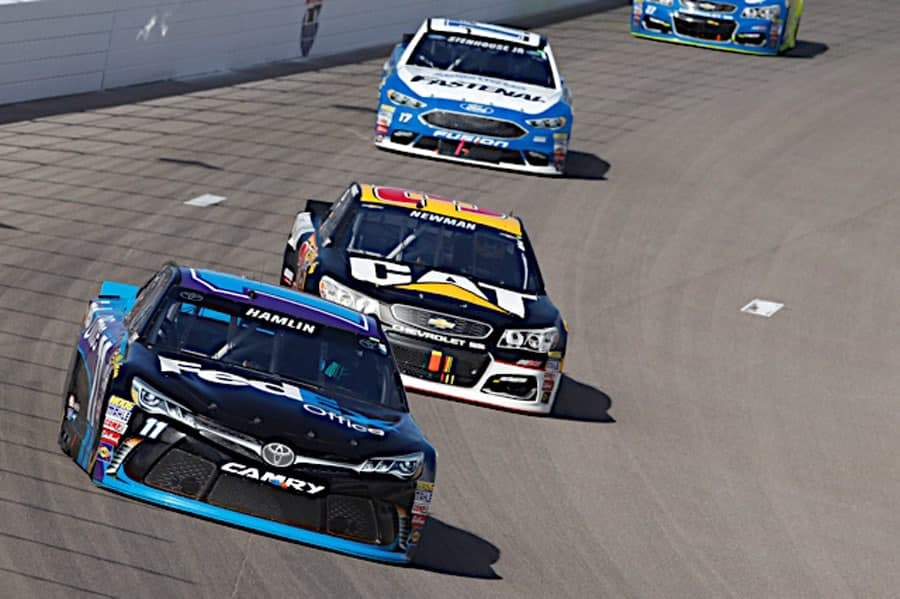 Audi in NASCAR? It might just be a reality.

It may have come out of the blue, but last week NASCAR CEO Brian France told SiriusXM that Toyota’s success of going from a startup in 2007 to Sprint Cup champions in 2015 to Daytona 500 victor in 2016 has other manufacturers intrigued about joining the Sprint Cup Series.

“There is some interest,” he told Dave Moody, “and by a couple of different manufacturers and we would be open to that in the right conditions.”

I've heard the rumor for two years of Audi entering #NASCAR and know the interest has been there. My prediction is that it will happen.

New manufacturer rumblings appear every once in a while and usually die down, so it could just be a passing phase. The last major rumor involved Dodge returning to the sport only a handful of years removed from its swan song championship with Team Penske and Brad Keselowski. The one before that? Audi’s parent company Volkswagen supposedly moving to NASCAR with Penske in 2010. Obviously neither happened.

But the renewed speculation that the sport could see its first new manufacturer since Toyota has got us at Frontstretch thinking: should NASCAR bring in one (or more) manufacturers?

We Need This More Than the Charter System

The charter system is good in that gives teams guaranteed starting spots. That means a more predictable cash flow and helps bring value to the teams. That’s great. Adding more manufacturers would increase team performance and equity in a way that the charter system never could because a new manufacturer equals an influx of cash – something that teams need a lot of.

Think of it like this: in today’s Sprint Cup Series, there are about 40 teams – full and part-time – and only three manufacturers to handle the load. Compare to the mid-1980s when Dodge, Chrysler, Ford, Buick, Chevrolet, Oldsmobile and Pontiac were all fielding cars. Today, inevitably, with three makes in the field the best teams get a lot of manufacturer support while the smaller teams get little to nothing. That scenario leaves them off the pace unless they partner with a bigger team for resources, and that costs money that could be better used in other places.

For some teams, this model has worked. Furniture Row Racing and Stewart-Haas Racing both went from startup teams to championship contenders over a 10-year period thanks in large part to alliances with Richard Childress Racing and Hendrick Motorsports, respectively, but those teams are the exception and not the norm. Other teams utilizing alliances include Germain Racing, JTG Daugherty Racing and Tommy Baldwin Racing, and they are nowhere near as competitive as the big guns that they are getting cars, parts and info from. They certainly run better than they did before the alliances, but they could go so much farther.

Imagine if any of those teams were to sign up with Audi (or Honda, or whichever other manufacturer wanted to join the sport) as a flagship team. Of course there would be growing pains – Toyota proved that – but over the long run the partnership would pay off. The smaller team of yesterday becomes a powerhouse of today. It’s happened before. Michael Waltrip Racing went from Toyota startup to championship contender in five years. Dodge went from reentering the sport to nearly winning the championship in just one year until Sterling Marlin injured himself late in the 2002 season.

Money talks, and the influx of cash from a new manufacturer speaks loudest of all. Even the big teams aren’t susceptible from a change in livery. Both SHR and FRR have made switches from Chevrolet because they weren’t getting the factory support they felt they deserved. Remember, drivers from both these teams made the Championship 4 last season at Homestead, and they’ll be driving cars other than bowties in 2017 – SHR moving to Ford and FRR having already made the switch to Toyota this season.

New manufacturers grow the pile of money available to teams and alleviate the issue of having some teams locked out of factory support. Imagine a world where any team – not just the championship contenders – can move (or threaten to move) to another car make in order to improve itself. The teams will improve and the racing will improve, and even those most bullish about the new low-downforce package wouldn’t complain about that.

I’m going to compare this prospective new manufacturer (Let’s call them “Nash”, in honor of the 65th anniversary of the defunct car company’s only NASCAR win, with Curtis Turner driving on April Fools Day 1951) to Toyota many times in this article because it’s the most realistic way of looking at. If Nash comes into the sport, it would probably be a foreign brand that’s trying to win over the southern audience that NASCAR will always have. It would also probably be brand new to the sport. Just like Toyota.

When Toyota came in, the manufacturer struggled mightily. Its fleet for the inaugural season included two brand new teams and Bill Davis Racing. Only one Toyota, the Davis No. 22, finished in the top 35 in owner points. Michael Waltrip Racing, in many ways the flagship team for Toyota, started off terrible by getting caught cheating at Daytona and missing race after race afterwards. Michael Waltrip had negative points in May because he was penalized for Daytona and couldn’t make a race for months.

So, what did Toyota do? It paid a chunk of change and was able to convince Joe Gibbs Racing to jump over in 2008. Gibbs had a big year with Kyle Busch’s breakout performance and the rest is history.

The lesson of this tale is that you can’t just show up at Daytona with new teams and a long underperforming single car team. Nash would need to come out with a bang with a big team that can support the manufacturer. The problem with that is that no big teams want to switch. Alternatively Nash could take the Dodge route and have a good team in Chip Ganassi Racing, a mid-pack team in Petty Enterprises, and a new team with Evernham Motorsports (which it helped prop up by outright sponsoring), but that isn’t going to happen.

The costs to start and sponsor two new full-time cars are even more expensive today than they were 15 years ago. The team would be a money pit for years until it could get up on its feet. Never mind the charter system making it even more expensive. Teams need a charter for all of their full time teams, or else they’d lose out on most revenue streams provided by the system.

What established teams would want to jump over? It’s a short list of teams that include Richard Petty Motorsports (which would jump at the chance) and possibly CGR.

But okay, let’s say there are some Nash Ambassadors at Daytona, a couple sponsored by Nash itself and somehow procuring charters. Who is going to build chassis, engines and run the team? None of those teams currently have an engine department and only CGR builds chassis.

There are four relevant engine builders in the Sprint Cup series. Hendrick, Earnhardt-Childress, Roush-Yates and Toyota Racing Development. Obviously TRD isn’t jumping ship and Roush-Yates has such a strong connection to Ford it would be nearly impossible to imagine a switch. Chevrolet would never allow Hendrick to go and if Earnhardt-Childress (and in turn RCR) wanted to move on from Chevrolet, it would have way before Stewart-Haas jumped.

Again, you can go full 1950s factory team and just have Nash build everything, but why? It would cost a ridiculous amount of money, there would be no way to compare it to an established team, and as TRD showed, it would take a long time to become relevant. It took TRD two and a half seasons to win a race, and only started to contend weekly when Gibbs starting using it in 2012.

All of that adds up to a recipe for an irrelevant manufacturer who may not have the patience or the willingness to stick along as long as Toyota did. It’s just not financially viable, and with how many longtime fans respond to Toyota even to this day. Just read a comments section on a NASCAR Facebook post about a Toyota: it just isn’t worth the trouble for all involved.

If Audi joins NA$CAR, will they use VW technology to circumvent Brian’s rules? Hendrick will have competition.

There is no way Audi will enter NASCAR. Their targeted competition is BMW and Mercedes-Benz. VW maybe, but Audi is marketing up, not down.

Audi and Porsche are both owned by VW AG. So from the corporate sense it has to be questioned whether its sensible to compete against each other at LeMans. Maybe Nascar makes sense by avoiding competing against each other. On the other hand does it cheapen the brand image?

Guess we shall see but one thing for sure it wont be Dodge. Not as long as its owned by Fiat anyway.

BTW: its not correct to say “should Nascar bring in new manufacturers.” Rather it should be “do any more manufacturers want to come into nascar?”

VW stated several years ago that they weren’t interested in NAPCAR because it wouldn’t allow them to showcase their technology. I doubt much has changed in NAPCAR’s technology to interest VW, Audi, or Porsche to interest them in Brainless Brian’s Traveling Three Ring Circus and Medicine Show.