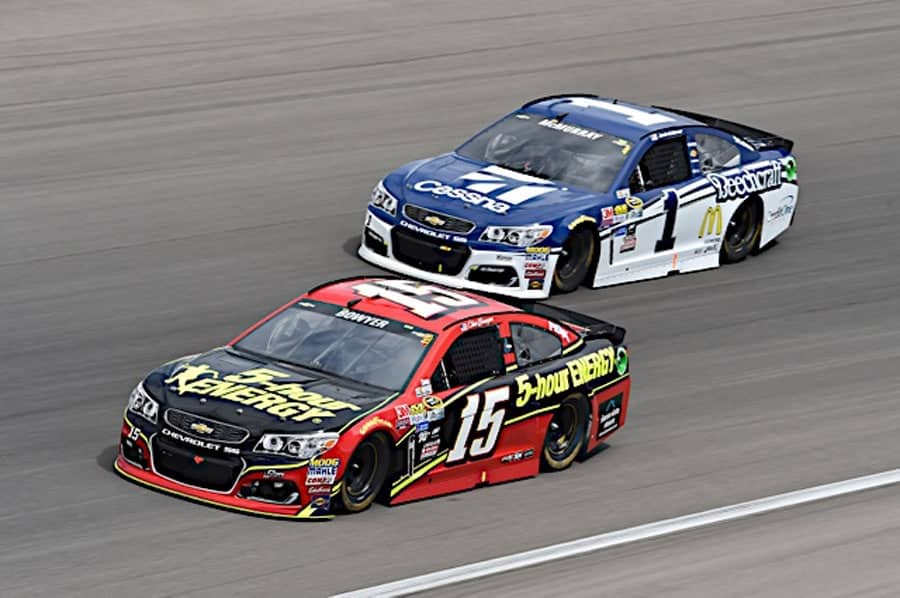 Dale Earnhardt, Jr. came out this week saying that he is going to donate his brain after he dies for scientists to study it. What implications could this have on the future of safety in racing if they were to find anything different in his brain?

Mark Howell, Senior Writer: CTE has been too long ignored by NASCAR and other sanctioning bodies in motorsports. Just in NASCAR alone, we can look to the plight of the late LeeRoy Yarborough, the failing condition of Fred Lorenzen, and the suicide of Dick Trickle, which (I think) occurred from many years of racing-related head trauma. I’ve written and lectured extensively about CTE as an ongoing problem in NASCAR that’s been overlooked by those running the show. Only in the last couple of years has NASCAR taken the threat seriously, and that’s because of Dale Earnhardt, Jr. and his experiences with concussions. Brain injury can manifest itself in many ways, and I believe Junior’s donation will draw more racers into the research discussion. This is a real problem that can no longer be considered just a football or hockey concern.

Bryan Gable, Contributor: It’s tough to say what conclusions scientists might reach decades down the road by studying one driver’s brain, but Junior’s intentions are certainly good.  He is no stranger concussions, and his troubles during the 2012 Chase were what really stirred up recent conversations about the pressures on drivers to run every race, even if their health is at risk.  Safety is always going to be a moving target, and in the meantime, Junior’s announcement is a reminder of that fact more than anything else.

Phil Allaway, Newsletter Editor: It’s likely too far out to make much of a difference right now.  If Earnhardt Jr. were to keel over tomorrow, that would be a whole ‘nother story, though.  Examining the brains of NASCAR drivers who recently passed likely would show the results of an era in which safety just wasn’t quite as good.  Safety has most definitely improved in recent years.  Injuries in general are down, head injuries amongst them.  You can’t get away with things like what Earnhardt Jr. did in 2002 at Fontana anymore, either.  My guess is that the next step will come with improved helmet technology, and that stuff is already on the way, at least for motorcyclists.

Amy Henderson, Senior Editor: I agree that it’s hard to say what implications something that will likely happen years from now will have, but it’s an interesting discussion, and honestly something NASCAR and other motorsports’ governing bodies need to be addressing now.  I’d love to see helmet sensors similar to what the NFL uses.  A concussion, if you are lucky enough to have never experienced one, can really mess with you for a long time, and the effects of them are cumulative.  I think Dale Jr.’s announcement is a good reminder that complacency surrounding safety is never an option, and the more that can be done to both understand and prevent traumatic brain injuries, the better.

MVPindex released a list of the most engaging NASCAR drivers on social media, with Dale Earnhardt, Jr. and Jimmie Johnson at the top of the list.  Which drivers do you think are the biggest racing “must follows” in social media these days?

Allaway: In NASCAR, it’s probably Dale Earnhardt, Jr., Brad Keselowski, possibly Johnson, then someone like Clint Bowyer because he’s quirky.  Kevin Harvick is fifth.  Beyond them, you’re headed towards Ryan Blaney, Darrell Wallace, Jr., Ryan Ellis and Matt DiBenedetto.  Earnhardt Jr. was a holdout for years before being convinced to do after winning the 2014 Daytona 500.  Since then, he’s really taken to it and only made himself more likeable (also, he’s within 30,000 followers of Danica Patrick).  Outside of NASCAR, you’ve got people like Andy Lally and Ryan Eversley in sports cars and James Hinchcliffe in INDYCAR.

Henderson: Dale Jr. and Johnson are both great follows.  Johnson is surprising—he can be bland in public but on Twitter he engages fans and non-fans and is sarcastic as hell sometimes.  He and Casey Mears had a lot of er, fun on their flight home from Homestead last year and the ensuing Twitter conversation was classic.  Landon Cassill is fantastic—he shared video of himself post-wisdom tooth removal last week that was pretty hilarious. The Havicks are fun as well and a few of the sport’s younger drivers—Ryan Blaney, MattDiBenedetto, Ryan Ellis, Alex Bowman among others—are definitely entertaining.  Tony Stewart doesn’t post often, but when he does it’s worth the wait. Bottom line: check them all out and see who floats your boat…and be prepared for it to be someone you wouldn’t have expected.

Howell: Dale Earnhardt, Jr. is a favorite to follow on social media because of how smoothly he took to Twitter. His tweets combine his life as a driver with his hobbies as a racing historian and collector. Above all, Junior doesn’t take himself too seriously on social media; he’s more apt to make jokes or share humorous photos than he is to pontificate about the state of present-day NASCAR. Another driver well-suited to social media is Landon Cassill. He’s a fun Cup driver to follow. For family insights right out of a sitcom, it’s Kevin (and Keelan) Harvick by way of wife/mom DeLana.

One thing that’s been talked about after the Charter system became reality is the lack of reporting prize money, as it’s now calculated differently.  NASCAR has said it’s something they may reconsider in the future, and that teams know what they are competing for.  Do the fans need to know the winnings or is it much ado about nothing?

Henderson: Totally much ado about nothing.  While we hear through the grapevine about other pro athletes’ salaries, it’s not something fans really need to know.  Race winnings have always been deceiving anyway in that the driver does not take home the winnings, the team owner does, and the driver generally gets a percentage as stipulated in his contract.  Not every driver gets the same percentage, and most have a base salary as well, which traditionally have not been disclosed.  These aren’t thoroughbred race horses whose value as producers hinge on what they and their offspring bring in in prize money.  While I hope the smaller teams are getting a bigger piece of the pie under the charter system, there’s no burning need to know how many dollars anyone is taking home.

Howell: Prize money has always been confusing to follow and chart. It’s that whole “the-guy-finishing-20th-won-more-than the-guy-finishing-15th” deal. One good reason for not publishing money amounts:  it keeps fans from getting even more suspicious about how NASCAR and track management work the numbers. Small teams, from my experience, get a lot of promises, but little come payday. Prize money details are probably best left to the teams.

Gable: Speaking from experience, I never understood all the details of the prize money payout system, but it was still nice to see how much each driver was winning each race.  The removal of that information reminds me of how NASCAR stopped releasing race attendance data several years ago.  Fans don’t really need to know either of those things, but it makes it look like the sanctioning body has something to hide when information suddenly becomes unavailable to the fans.

Allaway: NASCAR has been talking about transparency over and over again in the process of selling the Charter system.  Not publicly reporting the winnings of each team is the complete opposite of transparency.  Recently, The Motorsports Group (No. 30 Chevrolet) asked their followers on Twitter if they should post the now-secret winnings each week online.  I don’t believe that they did it, but I feel like it is something that NASCAR never should have stopped doing.  I’d argue that the teams definitely need to know and the fans should know what this Charter system is doing to those teams that weren’t lucky enough to snag a Charter.

The CWTS returns to action at Martinsville after a month off, while the Sprint Cup Series is running race No. 6 of 2016.  Who could pull off a surprise win in this weekend’s races?

Gable: I want to see if Daniel Hemric can keep up his good start to the season.  Driving for BKR might be the key to getting his first victory.  As for the Cup Series, look no further than Aric Almirola.  He’s overdue for a top 10 this year, and his team owner certainly knows a thing or two about winning at Martinsville.

Allaway: Martinsville is always a tough call since there’s so many good drivers in the field.  Sure, Kyle Busch might quench his thirst for trophies and win it, but what’s the fun in that?  What would really surprise me is if Kaz Grala manages to pull off the win in his series debut on Saturday.  Grala has great equipment from GMS Racing, but he hasn’t exactly set the world on fire in K&N East short tracks (he’s better on roadcourses).  I’d also keep an eye on both of ThorSport Racing’s rookies, Ben Rhodes and Rico Abreu (with emphasis given to Rhodes).

Henderson: In the truck race, keep an eye on Cameron Hayley.  He’s only raced the paperclip twice, but he’s finished no worse than 11th, and he’s in a good ThorSport truck. Among the Cuppers, one to keep tabs on is Clint Bowyer—he’s among the top drivers in the series at Martinsville, though he doesn’t have a win there, and running for a smaller team isn’t quite the handicap it is at most other venues.

Howell: On the CWTS side, I’m thinking it’s a good opportunity (although maybe not so much of a surprise) for Daniel Suarez to take the win. For the Cup race, it might be Chase Elliott’s weekend to shine. Again, maybe not much of a shocker, but a win all the same.