Brian Vickers topped opening practice for the Sprint Cup Series at Martinsville Speedway. Filling in for an injured Tony Stewart, Vickers ran a quick time of 19.485 seconds [97.182 mph] to edge ahead of Denny Hamlin and Joey Logano by a mere 0.019 seconds.

Ryan Newman and Kyle Larson – one week removed from a head-on crash at Fontana – rounded out the top-5 competitors.

In the closing minutes, trouble found Trevor Bayne as he backed his No. 6 Ford into the outside wall. Bayne’s Roush Fenway Racing crew will head to a backup machine in time for qualifying.

“I tried to push the braking zone a little bit more and it started wheel-hopping really bad,” Bayne said. “There was nothing I could do about it.”

With the exception of Vickers, Stewart-Haas Racing struggled to find speed on this paperclip oval, NASCAR’s smallest on the circuit. Kevin Harvick, Kurt Busch and Danica Patrick finished 17th, 18th and 29th, respectably.

The 80-minute session saw all 40 cars take to the half-mile track.

Growing up in Easton, Pa., Zach Catanzareti has grown his auto racing interest from fandom to professional. Joining Frontstretch in 2015, Zach enjoys nothing more than being at the track, having covered his first half-season of 18 races in the Monster Energy NASCAR Cup Series in 2017. With experience behind the wheel, behind the camera and in the media center, he thrives on being an all-around reporter.
Previous William Byron Paces Opening Truck Practice in Martinsville
Next Martinsville a Homecoming for Wood Brothers Racing 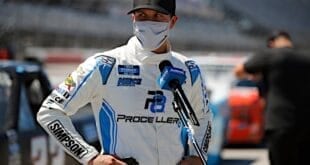 Did You Notice?: Talladega’s Modern-Day Myth That Anyone Can Win