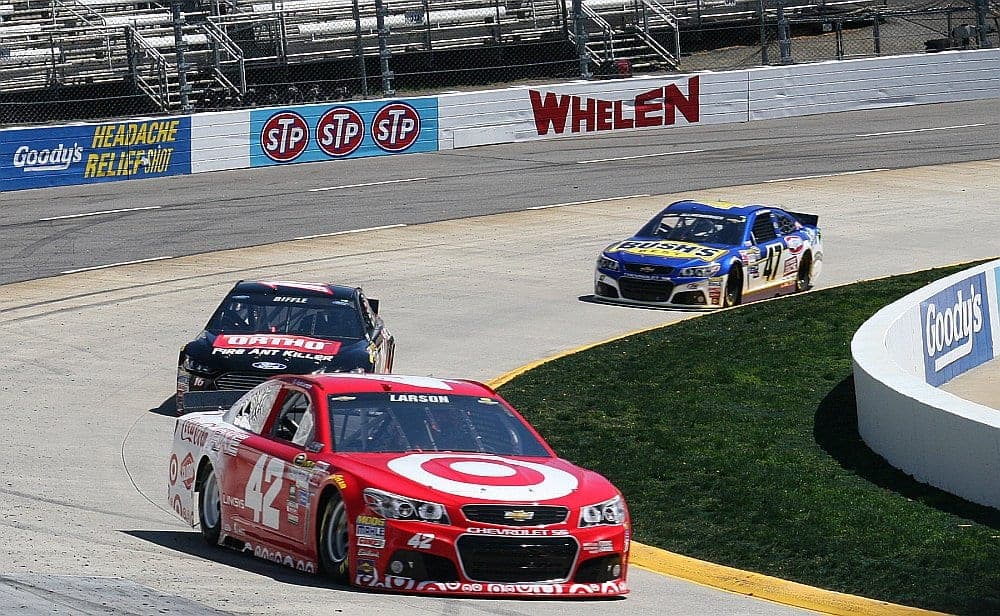 Who Will Knock the Rust Off Best in the Truck Series?

Finally, they are back!

After more than a month of sleeping and waiting patiently for the Camping World Truck Series, they are back for round No. 3 of the 2016 season at Martinsville Speedway.

It sure is a funny way of starting a national series season. The buildup and hype for the opening round at Daytona hits the chip with the year’s biggest race. Then, we have but one race until another offseason-like silence before the next event: another crown jewel of the half-mile Martinsville circuit.

With a number of driver debuts on tap for Saturday’s Alpha Energy Solutions 250, should we be focusing on the veterans instead? Not so fast.

One driver has milked this long break above most and that is Parker Kligerman who leads the points following back-to-back top-10 finishes to start his comeback season in a NASCAR series. The 25-year-old hasn’t competed on a full-time basis in Trucks since 2012 and will start Martinsville in the No. 92 Ricky Benton Racing Ford – equipment that finished fifth at Martinsville in 2012.

Looking at some impressive rookies in 2016, Cole Custer, 18, will return to Martinsville a year removed from a controversial race-losing spin in the spring race of last year with Matt Crafton and Joey Logano. Christopher Bell has the most rust to knock off following a horrible hit in the closing laps at Atlanta and a wild flip to start the year in Daytona.

Showing strong speed until both accidents, Bell will be a safe bet to not only end the rough streak of bad luck but to grab win No. 2 in his career.

In terms of debuts for this weekend, Kaz Grala will pilot the No. 33 Chevrolet while Spencer Boyd is in Mike Mittler’s No. 63 Dodge. Three female drivers will attempt to run the event with sisters Claire and Paige Decker joining cousin Natalie in the entry list, with both Claire and Natalie making their series debuts.

With the rookies behind, we are finally onto the veterans who eye return trips to Martinsville victory. Matt Crafton has won two of the last four races at the track while Johnny Sauter and hometown boy Timothy Peters will look for their second Grandfather Clocks on Saturday.

If history repeats itself, you may want to sty out of their way.

What Sprint Cup Short Track Talent Will Reign in Martinsville?

With photo finishes, pack racing and intense competition through five races this season, the Sprint Cup Series has one thing yet to put on the 2016 resume: a short track.

The ‘paper clip’ of Martinsville Speedway will kick off the final track type yet to be seen by the highly praised lower downforce package as a full 40-car field will see the green flag on Sunday for the STP 500.

Sometimes relatable to a plate track, in terms of the unpredictability of the racing which often leads to underdog contenders among the top 10 runners, Martinsville is a perfect storm for excitement. In only the past two races, the short track has showcased top-15 finishes for drivers like Tony Stewart, AJ Allmendinger, Danica Patrick and Justin Allgaier – teams who have seen little action in the top 15 otherwise.

Additionally, the last nine Martinsville races, on average, have been decided by a mere 0.372 seconds. Every year it seems to come down to the final corner.

Even with this heightened sense of unsteadiness and insecurity, per track history, those pesky frontrunners are still on their game once it’s time to hand out the Victory Lane checks. Hendrick Motorsports, among three drivers, has won five of the last seven races at Martinsville.

Yeah, Jimmie Johnson is good everywhere but this short track has been a true feeding ground for the No. 48 as he has won eight times since 2004. Chase Elliott hits the one-year anniversary of his Sprint Cup debut as he has a couple weeks of momentum on his side along with a well-earned short track win at Richmond last season in the XFINITY Series.

Also under the Hendrick stable is Kevin Harvick and Kurt Busch for Stewart-Haas Racing, two drivers with Martinsville triumphs already in their history books [Harvick in 2011, Busch in ’02 and ’14]. However, they each combine for just six career top-5 finishes at the track.

Shockingly, Kurt Busch only has five career top 10s at the Virginia track, with his 2014 victory breaking a nine-year string without one.

Right up there in the Martinsville win column is Denny Hamlin. The Daytona 500 champion enters this weekend as the defending race winner while teammate Kyle Busch still searches for his first victory at the track along with Carl Edwards and Matt Kenseth. Wow, hard to believe these three Joe Gibbs Racing talents have never led the last lap in 76 combined Martinsville starts.

When it comes down to it, some of the sport’s quickest drivers week-in, week-out are darn quick at this place, but still cannot be guaranteed to grab the win. That’s what makes short tracks among the most fun.

Any Cause for Concern for IndyCar race at Phoenix?

In an exciting return to the Verizon IndyCar Series schedule, Phoenix International Raceway will put the photo NASCAR finish in the rearview as the open wheel series begins race No. 2 of their 16-race season.

Kicking off an appearance of three new facilities to the calendar [joining Road America and Boston Street Circuit], Phoenix is the only new oval for this year. Naturally, the IndyCar paddock is hot with questions and even some concern centered around the on-track racing.

Following a multi-day test at the track in the offseason, drivers and team owners have built up a reasonable view on what Saturday’s event may look like. Former Formula 1 competitor Takuma Sato believes passing will be difficult, saying the track is “pretty much a single racing line.”

“I think it will be very difficult to go two-wide and overtaking will be tough,” Sato said. “Also, you lose significant downforce when following a car but you cannot really choose different lines for finding clean air, so it’s crucial to have a good mechanical grip and be strong in traffic.”

To join the tough passing conditions, the physical loads of a 20-second lap on a 1.022-mile track will supply the drivers with more than 5Gs in the relatively flat corners.

“Mental concentration will be critical,” fellow AJ Foyt Racing driver Jack Hawksworth said, “and staying alert and on top of the car for 250 laps with 22 cars out there will make a big difference.”

This whole discussion was sparked by comments made from Team Penske owner Roger Penske who believes the downforce for IndyCar is “ridiculously” high, matching strong G loads and a track too high on grip.

“For us to be going around Phoenix in 19 seconds pulling 6G is ridiculous,” Penske said. “If something happens, there’s no human being who could catch it.

Instead of this being simply a concern of the racing we will see, this can now be centered toward a safety issue. Iowa is a similarly quick track despite its increasing track banking and that place has been on the schedule for 10 years.

Phoenix will more than likely see a track record set in stone during Friday qualifying. To me, that is always an exciting feat no matter the track.

Danger is nothing new for IndyCar following one of the most frightening weeks in the history of the Indianapolis Motor Speedway last May as well as a nail-biting race seen in Fontana.

After the day of practice and qualifying before the 250-lap show on Saturday, we will have a better idea on what we may be in for. You may want to keep the cameras rolling for this one.

What [If Any] Repeats of Fortune Will We See in Bahrain for Formula 1?

If you have followed Formula 1 in past seasons, this may seem like a silly question to ponder.

Australia is Australia. The season opener. Teams are reasonably fresh and the wild, what-the-heck moments are of constant reminder of the drivers’ desire to kick the year off on the highest high.

Examples of this came the likes of Sebastian Vettel, who grabbed the lead from Mercedes off the line to an eventual third-place finish, along with Jolyon Palmer – finishing 11th in his F1 debut – and Carlos Sainz, Jr. who beat Toro Rosso teammate Max Verstappen for ninth spot.

Above all, however, was Romain Grosjean who brought a sixth-place finish in Haas F1 Team’s F1 debut. A truly remarkable stat tied Toyota for the highest finish on debut.

But for these teams, can any pull a repeat? Surely, Vettel will be in closer proximity to the ‘Silver Arrows’ this time around as he has triumphed at the 3.36-mile circuit twice. Ferrari teammate Kimi Raikkonen split the Mercedes’ last time out in Bahrain, so it is realistic to predict a victory from either Ferrari.

As for the Renault of Palmer, the banana team came up just short of the points in Australia despite showing solid reliability. Palmer will join Kevin Magnussen just outside the points once again in Bahrain, unless they can find an extra step on the competition.

The Toro Rosso “rivalry” since 2015 hit another limit in Australia as 18-year-old Verstappen came in contact with 21-year-old Sainz in the closing laps. With prior incidents between them, the two will continue to be high on the entertainment dollar as they’ll fight for lead driver.

If anybody says Grosjean’s point-paying result in Melbourne was only due to a semi-high attrition rate, I have one word to say: pace. Haas F1 showed enough pace to not only stay in the points in the final 35-lap stint, but actually pull a gap on the Mercedes-powered Force India of Nico Hulkenburg.

With Esteban Gutierrez back and ready to put the horrific Melbourne crash behind him, both drivers could reach the points once again in Bahrain. It will be a pivotal race in where we place expectations further into the team’s rookie season.