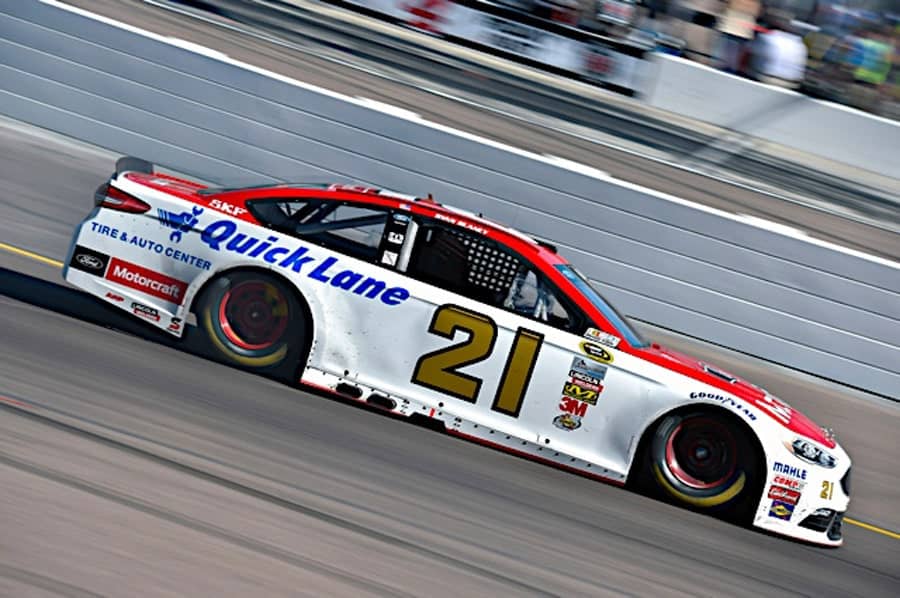 Ryan Blaney isn’t from Martinsville, but it’s his team’s home track. While the Wood Brothers Racing shop is located in North Carolina now the town of Stuart, Virginia, just a few miles up the road from Martinsville Speedway, is where the long and oft-told story of the No. 21 car began.  The oldest team in the NASCAR garage, Ford’s once-flagship program is back at the short track where it was once a staple for the first time since 2011. It’s part of a series of landmark moments as they return to full-time Sprint Cup competition after running a partial schedule in recent years.

Rookie Blaney has already made waves in his first full Sprint Cup season, currently sitting 16th in points with two top-10 finishes in five races. He understands his team’s history, though he’s one of the younger drivers in the field at age 22, and Martinsville holds some memories for the driver as well.

“It’s nice to be back at pretty much their home track,” Blaney said Friday.  “Stuart (Va.) is only 20 miles away from here, not even, so it’s cool to be back here with those guys, kind of have everybody out and see everything.  I think Glen (Wood) is gonna be able to make it on Sunday, which it’s really gonna be nice to get him to another race, so hopefully that will go well for him.  I remember growing up watching my dad race here.  I grew up 45 minutes away in High Point, North Carolina and I would come to this race every year and watch my dad and watch the trucks.  I just thought it was such a cool place.  It’s really neat to be able to run a Cup car, let alone the 21 car over here.  That just kind of adds to the special factor, but it’s nice to be back and cool to be making my first Cup start here.”

The team is hosting an open house for fans Friday at its Stuart museum, an annual event which attracted a crowd of 5,000 last year.  Blaney will be there Friday evening but says that he doesn’t expect to be the main attraction.

“They aren’t coming out to see me, that’s for sure,” he laughed. “They’re not coming out to see me.  They’re gonna come out to see the Wood Brothers.  I’m just gonna be there and shake their hands.  They’re the main stars up here in Virginia.  They’re rock stars up here, so it’s cool just to be a part of it.  I’m gonna be a part of it tonight to kind of share some stories with some old fans of theirs.  They’re actually gonna have all four of the original Wood Brothers now, which is really, really neat to get all four of them together.  And then of course Eddie and Len will be there, too.  It’s gonna be cool.  It’s gonna be a lot of fun, but they’re definitely there to see them.  Maybe if there’s like 5,000, there might be seven there to see me and most of the other ones there to see those guys.”

“I love old racing stories and knowing the history of our sport and growing up around it,” he said. “I like to learn as much as I can about it.  Leonard told me a really neat story this week at the shop.  Leonard didn’t drive too much and tested a car out here one time and he was messing with intakes like air flow and air boxes and he would run a hose down it and run the hose back to his mouth and he would blow in the intake to see if it made more power or suck air out of it to see if it made more power.  He said neither of them worked, so he just kind of did away with that project, but that was really cool to hear that story.  That’s what they did back then.  I was fascinated by it and that kind of shows you the brain he has that he would even think about something like that, let alone be doing that and driving.”