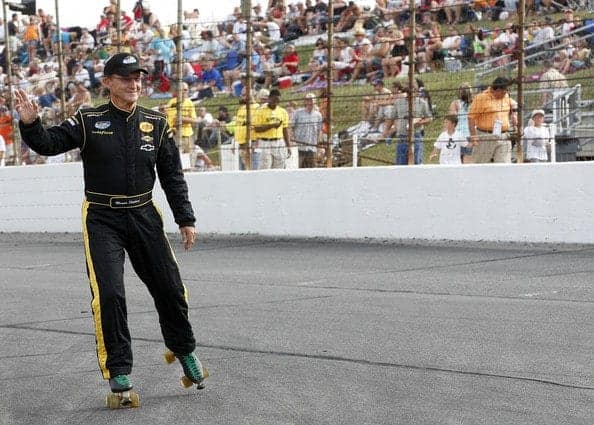 Things this week started off innocently enough: who of NASCAR’s current active drivers (for these purposes, those still competing in one of the three national series) had scored their first NASCAR Sprint Cup Series win at Martinsville Speedway?

You’d think it’d be a decently sized number. After all, recent races at the track in the Camping World Truck Series have yielded first-time winners, among them Darrell Wallace, Jr. and Timothy Peters. The speedway’s been around since each of today’s drivers started their career, so it’s not a matter of a newer track still searching for its maiden first-time Cup winner (what’s up, Kentucky Speedway?). It’s a short track, on which most up-and-coming drivers cut their teeth before transitioning to the big circuits.

So it may surprise you to learn that just one active NASCAR Cup, XFINITY or Camping World Truck series driver got his first Cup win at Martinsville, and he’s not even running Cup regularly anymore.

In 1981, Morgan Shepherd, practically a baby at 39 years old, won his first Cup Series event by taking home the trophy for the Virginia 500, driving the No. 5 for Cliff Stewart. He led 203 laps that day, one-upped quite literally by Harry Gant, who paced for 204 but ended up fourth. Neil Bonnett and Ricky Rudd finished second and third, while Terry Labonte placed fifth. Mike Alexander finished 10th — remember him?

And as far as Sprint Cup winners either still in the series on a full- or part-time basis (27 in all) or competing in the XFINITY or Truck series (Shepherd, joined by Elliott Sadler, Derrike Cope and Joe Nemechek), Shepherd’s the only one to taste first (and, sometimes, only) glory at the paperclip-shaped circuit in Virginia.

Though that certainly isn’t to say the track never claimed other first-time winners in its nearly 70-year history. Most recently, Ricky Craven scored the first of two wins (hint: it’s the one you don’t remember because it’s the one broadcasts don’t show every time someone runs a segment of the greatest finishes in NASCAR history) at Martinsville in 2001. Geoff Bodine did it in 1986, the first of 18 series wins (including four at Martinsville itself). Before then came Harry Gant in 1982. Dave Marcis, 1975. Earl Ross’ only Cup win, 1974. The list lengthens almost exponentially the closer one gets to NASCAR’s earliest days — which makes sense, of course, given Martinsville’s standing as the only track from that inaugural 1949 season still contesting Sprint Cup races.

But back to the present day: what’s interesting here is that the lack of modern first-time winners getting it done at Martinsville is solely a Martinsville problem. One might be tempted to check other short tracks on the circuit to see if the stat persists there, but it really doesn’t; though it’s by no means a large number, two current drivers won their first races at Bristol Motor Speedway: Kurt Busch and the now-XFINITY regular Sadler. Expanding the selection by mileage a bit — as in, three-quarters of a mile — includes Richmond International Raceway, at which two more won for the first time: Tony Stewart and Kasey Kahne.

How about the most among active drivers? This will come as no shock to those who think superspeedway plate racing can be an equalizer, a prime spot for a rookie or winless driver to finally gain NASCAR immortality: it’s Daytona International Speedway, at which six current drivers won their first race. Four remain in the series full-time: Trevor Bayne, Greg Biffle, David Ragan and Aric Almirola. Then there’s Michael Waltrip, who’s been relegated to a superspeedway-only effort the last few seasons. Lastly, the driver to whom Bayne is often compared on social media and message boards these days due to both drivers’ Daytona 500 victories that haven’t since resulted in stupendous results: Derrike Cope, still trucking along on the XFINITY Series circuit in his self-owned ride.

Finally, among the current Cup tracks sans a first-time winner still in the sport: Las Vegas Motor Speedway, Kansas Speedway, Michigan International Speedway, Sonoma Raceway, Kentucky Speedway, Phoenix International Raceway and Chicagoland Speedway. Of those, Las Vegas, Kansas, Kentucky and Chicagoland boast zero first-time winners in the Cup Series, perhaps little surprise since none of those tracks were on the Cup schedule before 1998.

Could this weekend’s race at Martinsville provide a first-time winner? Kyle Larson, Austin Dillon, Chase Elliott and more are certainly itching to do so.