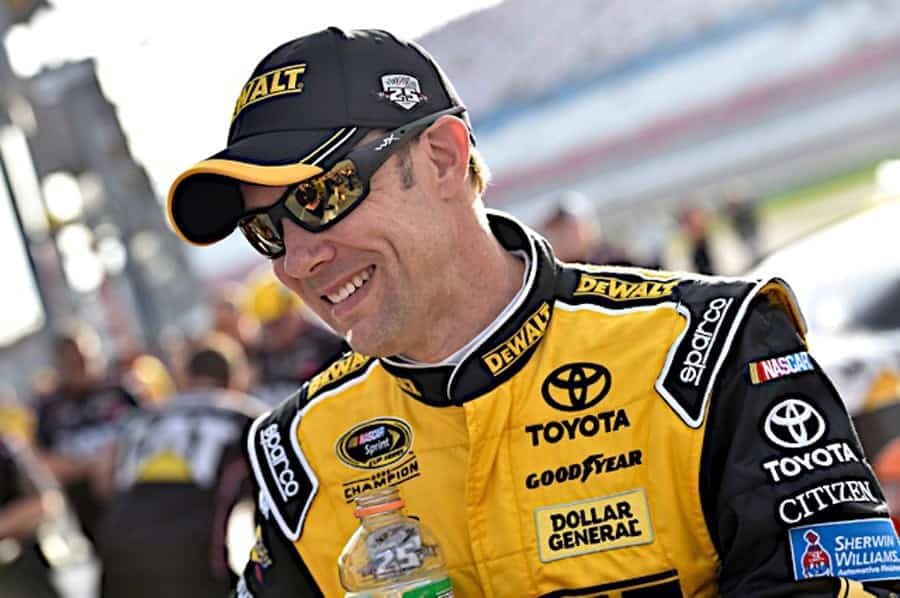 That phrase, however simple was the most important moment in Sunday’s Martinsville race. No, it wasn’t Kyle Busch overcoming a decade’s worth of bad history there. It wasn’t Busch reaching Victory Lane despite a valiant charge by underdog AJ Allmendinger. It wasn’t pit problems by a consistent Kevin Harvick or a self-induced crash by hometown favorite Denny Hamlin.

No. It was the final restart, with a tick over 10 laps remaining when Busch and teammate Matt Kenseth started side by side. All day long, these two had been a 1-2 punch up front for Joe Gibbs Racing; Busch led while Kenseth sat a handful of car lengths behind in second. Combined, they led 397 of 500 laps and others were rarely able to challenge them. The only opening for others would have been on restarts but even then, JGR had them down pat. All day, the two of them would play nice and find a way to “let each other in” regardless of who was starting on the pole position. The veterans knew how badly Martinsville’s outside line had failed to come in and if they didn’t work together, the driver sitting in second would simply be toast.

So with ten laps remaining, the question of team orders came into play. Would Busch let Kenseth slide in front for a moment expecting the No. 20 to play “gentleman,” give the spot back to the No. 18 and win it the hard way? Or could Busch control the speed of the restart enough where he created space for Kenseth to slide in behind him? Neither scenario came into play. Instead? Option C: teammates be damned.

“We’ve all got a really good working relationship,” Busch said about that final restart. “I think we all saw how good our relationship is at Daytona and the way we were able to work together, five of us [including Martin Truex, Jr. of Furniture Row]. But regardless, there coming down towards the end of the race, I mean, 10 to go, 11 to go, 12 to go, what’s really the threshold?  So we essentially told each other all bets are off with under 10 to go. I think we played it right.”

It clearly cost Kenseth and provided a natural opening for Allmendinger, the single-car upstart who restarted third. The No. 47 Toyota muscled Kenseth out of the way and it started a freefall for Kenseth as he never could fit back within that inside line.

“We’ve had fast cars this year, but got shuffled to the back,” he said. “So disappointing ending but it was an encouraging day. We ran really well, had great pit stops and they gave me fast cars. Hopefully, we’ll start getting some finishes soon.”

There was plenty of conjecture both during and afterward about what Tuesday’s debriefing would be like. Jeff Gordon of FOX was particularly vocal about the move, one that could have easily handed the victory to Allmendinger who was hungry to steal a playoff spot and will have limited opportunities to win this year. Gordon, coming from the “team first” mentality that transformed the sport during the 1990s with Hendrick Motorsports went so far as to say Tuesday’s debriefing might wind up telling a different story. As Matt McLaughlin so brilliantly stated in a sister column out today, fighting the good fight against team orders will be around as long as there are multi-car teams.

But when it comes to the final few laps? For the sake of the sport, gosh, I hope not. We’re already playing a dangerous game here with that, both during certain points in the postseason and at restrictor plate tracks such as Daytona. The JGR teamwork Busch speaks of down the stretch left a 1-2-3-4-5 trail of Toyotas that proved simply unpassable. It’s hard enough to make a pass these days; try making one when you have two cars in front, both working together and the second-place man (at Martinsville, Kenseth) able to act as a blocker for Busch down the stretch. It’s a Formula 1-like version of team orders that would almost certainly send additional NASCAR fans heading for the exits.

Luckily, the Busch-Kenseth incident wasn’t the only one between teammates at Martinsville. Austin Dillon and Paul Menard of Richard Childress Racing played bumper cars for literally the entire second half of the race. Both wound up with top-10 finishes but Dillon especially struggled with his emotions after contact with the No. 27 nearly spun him out. The drivers talked postrace and Dillon said he needed to “grow up.” But he also indicated fences would be mended within the next few days.

You know what, Austin? Sunday, that’s fine. Teammates during the week, sharing information and working together to get the best possible cars ready for the weekend is one thing. I just think Dillon shouldn’t be told to completely “grow up.” We need 40 drivers on track to act like 40 different individuals. Last I checked, it’s not Richard Childress Racing the organization who makes the playoffs: it’s Dillon the driver. He can’t combine point totals together, with Menard or anyone else to make it. Ditto for everyone else with a team car.

So many have said the sport has gone adrift in recent years with too many “vanilla” personalities. Well, you don’t get to have personality if you all blend into line and follow team orders. Kudos to Busch and Kenseth for doing it the right way.

Let’s just hope no one in suits or paying their paychecks hops in this week and tells them they’re doing it wrong.