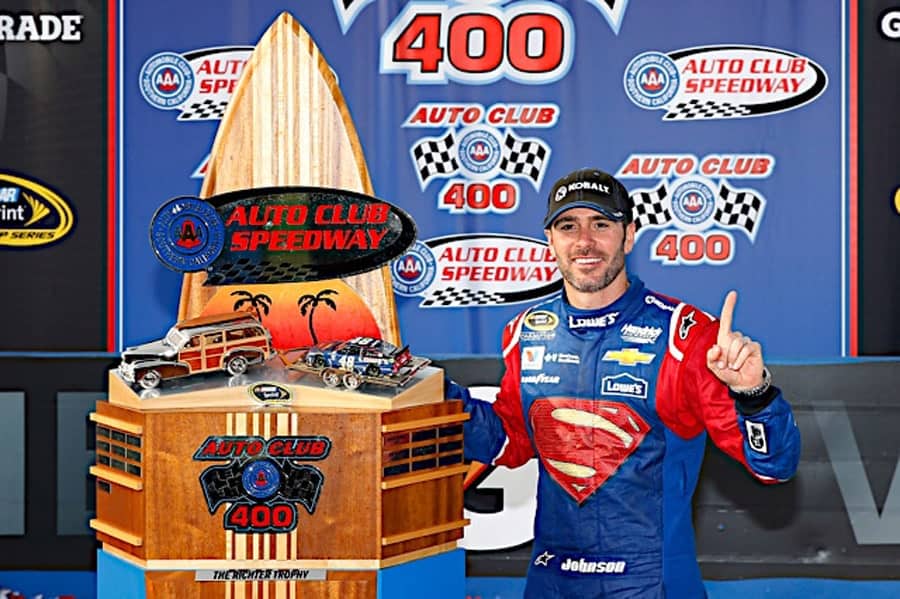 The iconic prize for winning the Indianapolis 500, the Borg-Warner Trophy, has the tiny sculpted face of every winner displayed on its sides.  It’s huge and shiny, yet classy enough for the history it represents.  Put it right on up there with the Stanley Cup among the most iconic trophies in all of sports.

Not only is it beautiful, but it perfectly represents Martinsville – the time it takes to become racer enough to win on, and a track suspended in time. It’s one of only a handful of NASCAR trophies to remain virtually unchanged in decades, so that drivers from Richard Petty to Darrell Waltrip, Dale Earnhardt, Jeff Gordon and Jimmie Johnson have all competed for, and won the same prize.  That makes it worth so much to the drivers, and every race fan worth their salt knows exactly where it was won.

He’s part cute, part badass and all cool.  While the Dover winner’s trophy hasn’t been around for decades and might not exude the class that some others do, it is fun and unique, and the stony figure holding a model of the winner’s car is recognizable to fans, who know exactly where it was earned. Somewhere at Dover, is there a closet filled with 1:24 scale diecasts of every single car in the field, just in case?

True, carting this one home means you just won the Daytona 500, but it’s not just the race itself that makes this one special. The base is shaped like an overhead view of the 2.5-mile Daytona International Speedway, and the car on the top, one of Earl’s many innovative designs — which incidentally included spray cheese in a can — was a design harking from a time when world land speed records were attempted and set on the beach not far from where the speedway sits today.  It seamlessly melds yesteryear with the here and now.

Admit it, when we win a trophy, we want it to be big. Bristol’s stylized loving cup is just that – tall, heavy and impressive.  And the bonus: the winner also gets a sword. The wisdom of giving a driver who just spent 500 laps beating and banging on a short track an actual sword is debatable, but it’s still cool. Even without the added cutlery, the giant cup is a great reminder of coming out on top at the Last Great Coliseum.

Do you have to show the punk with the clock? Why not have your crack research team find a picture of Petty with the clock? After all, it is iconic and that eliminates the egomaniac.