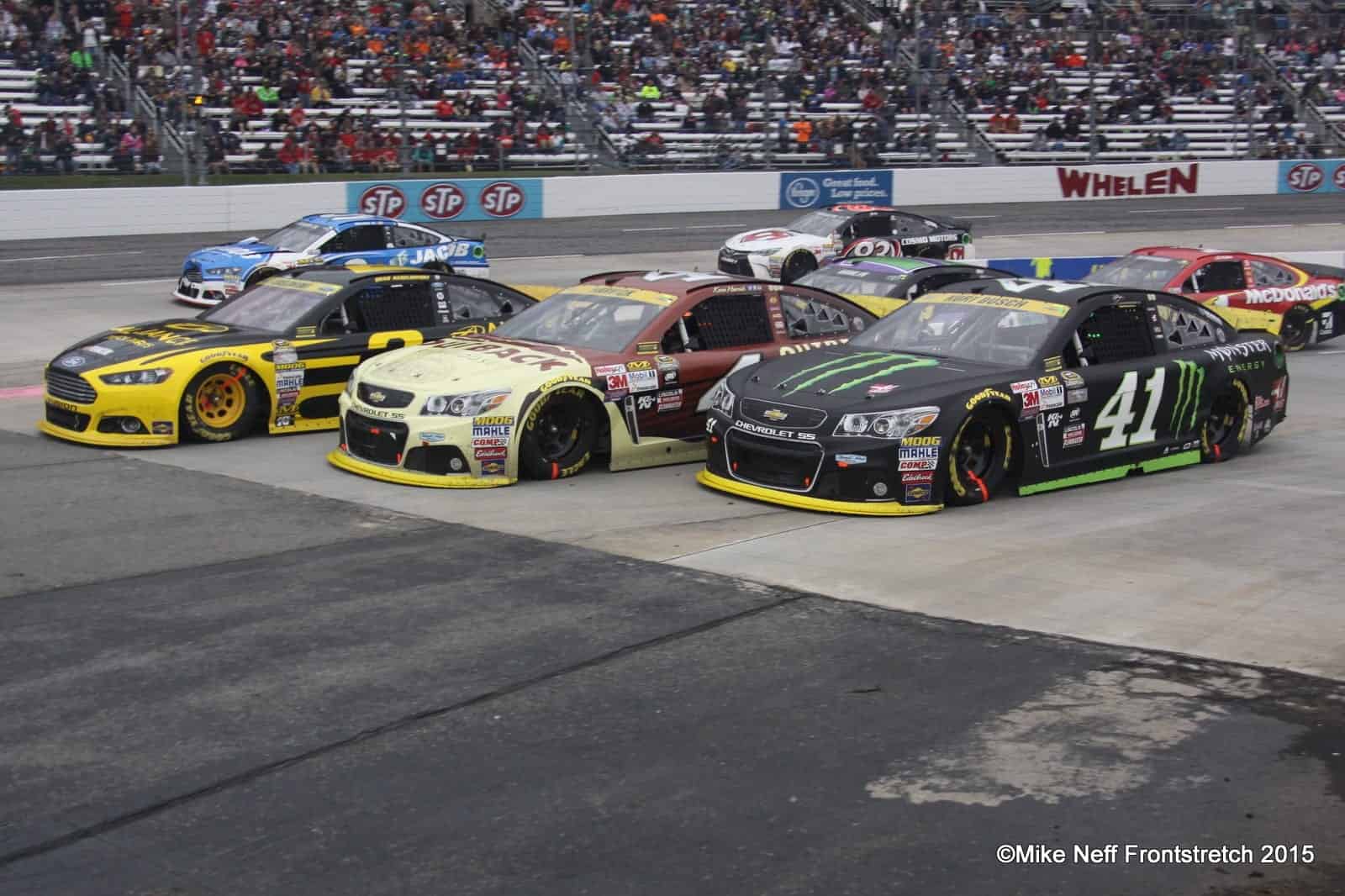 “Man, that Dillon kid and that wears-his-heart-on-his-sleeve Menard guy are going at it again.”

That seemed to be the big storyline of the Martinsville race last weekend. Austin Dillon and Paul Menard just kept going back and forth, roughing each other up in the corners and cussing the other out on the radio. Typical short track racing, but with the added twist that both drivers are teammates running for Richard Childress Racing.

It made for some great racing and a couple of highlights on NBCSN’s Scan All, but couldn’t they all just get along like the drivers over at Joe Gibbs Racing? After all, those four drivers – and their cousin over at Furniture Row Racing – seemed to race each other with the utmost respect on Sunday. Kyle Busch and Matt Kenseth, especially, using their position as leader on the restart to choose the outside lane so they could pull down in front of the second-place car on the inside and allow themselves to stay in the top two positions.

Owners pour obscene amounts of money into these teams, so it would make sense that they would want their drivers to play nice, and if one can’t win the race to hold up anyone who could make trouble for their teammates that could.

But sometimes racing teammates differently opens up entirely different cans of worms than expected. So, should drivers race teammate differently?

Teammates are great things. They can help provide alternative setups if one car can’t seem to get it right. They can offer other information to crew chiefs to help them make better decisions during the course of the race. They provide scale to team owners to help lower costs, and they increase the chance of said owner winning a race.

But they shouldn’t race each other with kid gloves.

I get why owners want their drivers to play nice. Perhaps teammates don’t need to bump and bang through the corners and push each other out of the way like Dillon and Menard did at Martinsville, but if they do it shouldn’t be a problem. After all, while the drivers are teammates they aren’t so in the traditional sense of the term. They aren’t racing for combined points, as Tom Bowles pointed out Tuesday. They’re racing for themselves, for their sponsors and for their own accomplishments.

They didn’t cost each other positions, and they both finished the race in the top 10. So perhaps not giving a teammate an inch isn’t a bad thing.

Teammates in NASCAR are really nothing more than what marketers call brand cannibals. That is, each driver and team is a separate and competing entity from a single producer. Apple makes both the iPad and the MacBook, and some consumers only buy one and not the other. Wouldn’t it make sense, then, for Apple to just produce one product for everyone to buy? Wouldn’t that mean the most profit for the company?

The answer is no, because a product mix of both can actually increase the profit of the company. So it is in NASCAR: two or three (or four) teams increase the chance of success for an owner, but each team is out to get the best finish it can muster. The iPad team won’t lie down so the MacBook team can hit its goals. Jimmie Johnson won’t lie down so Kasey Kahne can win a race.

Or to make a football analogy, say Jerry Jones decided to buy the Washington Redskins. Doing so shows the world of his immense wealth and it doubles his chances of winning a Super Bowl. But there’s no way he’d get involved when the two teams played each other. It would be up to whichever team put together a better 60 minutes that came away as the victor. There would be no team orders, no “let Tony Romo throw a touchdown to pad his numbers.” The better team is the victor and each team better give 100 percent.

And in NASCAR, 100 percent is a very important number. Remember, NASCAR reserves the right to penalize any team that is not giving the race its all. This rule was born from drivers allegedly manipulating a race at Richmond by spinning out intentionally and driving down pit road for no apparent reason to allow a teammate a better finish and, by extension, an entry into the Chase. Remember how that turned out?

But not all things are as bad as spinning out to help a teammate. Should they be allowed anyway? Should teammates be allowed to manipulate a restart at a track such as Martinsville so they can go into Turn 1 in the first two spots? Should teammates be allowed to tandem draft so that one doesn’t even have a chance to win the race? That was the biggest gripe about that style of drafting – that a driver like Johnson couldn’t win without a teammate like Dale Earnhardt Jr. pushing him to the win. Earnhardt couldn’t even think about pulling out to try and win because doing so would hurt both of them.

I’d argue there are very few instances of helping a teammate out that are OK. Call them exceptions to the every man for himself rule. Letting a teammate lead a lap is OK, as long as they give the spot back on the next circuit. Helping push a teammate to victory on a plate track is OK, because it probably means the second teammate is increasing his finishing position too. But that teammate should be able to pull out of line and try for the win if necessary. It’s only fair for the second driver.

These teams are filled with big boys and girls. They can handle a little pushing and shoving.

THIS IS THE POINT OF TEAMMATES, NO?

In a sport where breaks are so difficult to come by, teammates working together is absolutely essential for any team to capitalize on their investment.

Before I begin, a quick caveat. I’m not talking about racing for the win. In the final moments, teammates should be allowed to do whatever’s necessary – short of crashing their teammate – to win the race. Beating, banging, moving and changing lanes at restrictor-plate are all acceptable in the twilight stages of a feature to get a victory.

Outside of going for the win, though, teammates owe it to themselves and their teams to work together.

Imagine if Joe Gibbs Racing (and Furniture Row Racing) hadn’t worked together at the Daytona 500. Team Penske, Dale Earnhardt, Jr. and others lurked just behind the organization throughout the 500-mile event, waiting for the team to mess up, but they executed their game-plan flawlessly throughout the day, essentially making the other 35 competitors a virtual non-factor in NASCAR’s biggest race.

Had the team not worked together, that day might have ended differently for JGR. Sure, they may have won – their cars were strong – but the hill to victory would have been a much steeper climb.

Daytona was a drastic example of the benefits of teamwork, but there are smaller ones throughout the field every race. Teammates cut each other slack all the time, whether it involves letting the faster teammate by on a long green-flag run, allowing a teammate into the inside line on a restart at Martinsville or giving them a push on a restart at the larger tracks like Fontana and Michigan.

Each of the above moves has a direct benefit to the team.

By allowing a faster teammate to pass, both teammates save tires and don’t lose seconds on-track running side-by-side. Giving teammates a push or letting them into the preferred lane on a restart allows both teammates to keep or potentially improve their position up front.

On the opposite side of things, allowing teammates to race each other like any other competitor can have drastic consequences on the track, in the race shop and, most importantly, in an owner’s wallet.

The biggest example in recent memory comes with Roush Fenway Racing in the XFINITY Series. Constant battles throughout the season left Darrell Wallace, Jr., and eventual champion Chris Buescher at odds often in 2015.

The worst incident came at Dover International Speedway. Battling for the lead, Buescher mistakenly slipped up the track and into Wallace, giving the rookie damage that ultimately led to a cut tire and a 17th-place finish.

Buescher held on to win the race, but the result cost Roush money, led to rifts in the RFR shop that continued throughout the season, and cost the team an early chance to add Wallace to the championship conversation.

Sure, there may be some benefits to allowing teammates to race each other like any other competitor – increased competition amongst the organization can potentially bring out the best in each team – but the benefits of teams working together are much greater.