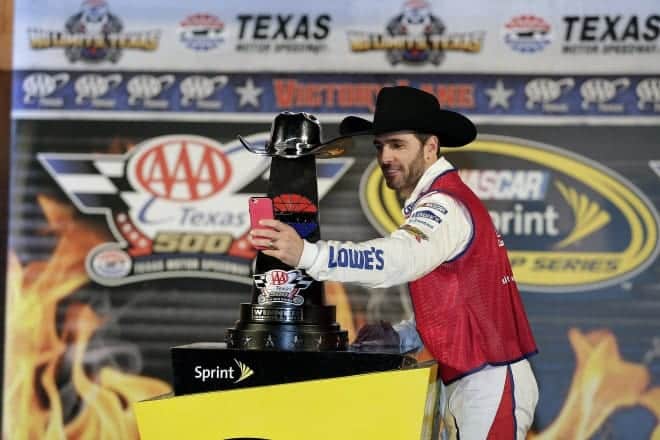 How Will the First Night Race Play Out in Texas?

Located in the middle of what some call the ‘short track swing’ of the Sprint Cup Series schedule, Saturday night’s Duck Commander 500 at Texas Motor Speedway is perfectly timed as the season’s first night race.

Coming off the 500-lap grind at Martinsville Speedway, Texas will flick on the lights to give us a Saturday night “fight” as we head to Bristol and Richmond in the coming weeks.

Night racing naturally brings a number of exciting factors that lead to a visually compelling race. Apart from minor explosions of sparks underneath the cars through Turns 1 and 2 past the halfway point, Texas provides a multi-groove racing experience for the drivers.

In last year’s 500-mile race, it took the No. 11 car of Denny Hamlin less than five laps to begin hugging the outside wall. On the other hand, Stewart-Haas Racing teammates Kevin Harvick and Kurt Busch could not have been lower, riding the white line through the corners.

According to 2009 Texas winner Jeff Gordon, Texas has some of the tightest, high-banked and abrasive corners on the circuit.

With a race like Saturday, changing conditions into the night will give a strong test to the new aero and tire packages in 2016. The most recent race at Texas saw a plethora of popped tires, including two from Kevin Harvick, who still managed to to finish third.

It’s been since Darlington last September that this package has been raced in nighttime conditions, so surprises must be expected in what has been an impressively competitive season so far.

Will ‘Sheriff Jimmie’ Grab Another Victory?

Legendary Texan musician Willie Nelson once said that one of the reasons he likes Texas is that there’s no one in control.

Willie must’ve missed the last 12 races at Texas Motor Speedway, as Jimmie Johnson has owned the Fort Worth track since 2012. With three consecutive wins and record after record of on-track dominance – including most all-time laps led, top-5 and top-10 finishes – Johnson is the man in the Lone Star State.

Johnson being unstoppable on a track isn’t anything too surprising, however. You can add Dover, Martinsville, Fontana and Charlotte to the list of tracks where the Californian has half-dozen or more wins.

With the killer track history to the side, you can’t beat Six-time’s 1.5-mile pace so far in 2016. Johnson has a win already in the bag at Atlanta – a similarly rough, bumpy surface to Texas – a third at Las Vegas and another win on the 2-mile Auto Club Speedway.

Despite these numbers, a true competitor to Johnson’s time out front this year has been the Joe Gibbs Racing organization. Denny Hamlin swept the Texas races in 2010, Kyle Busch has a Cup win and seven XFINITY wins while Carl Edwards and Matt Kenseth combine for another five Cup wins at Texas.

Bringing back the classic yellow No. 48 for the first time in five years – ironically the last year he didn’t win at Texas – Johnson still cannot be overlooked for a seventh trip to Victory Lane.

Will XFINITY Series See Another First-Time Winner at Texas?

Though the Cup drivers winning in the XFINITY Series is old news, yet still vibrant in NASCAR discussion, the second rung of the NASCAR ladder is packed with fresh faces in strong rides.

With many looking for their first career wins, like Darrell Wallace, Jr., Daniel Suarez and Brandon Jones, per track history, Texas has been a nice place for those first-time victors.

Dale Earnhardt, Jr. grabbed his first XFINITY win in 1998, while Kurt Busch and Trevor Bayne repeated the feat in 2006 and 2011.

But enough with ancient history, let’s talk recent. The last two spring races at Texas has seen two first-time winners. The first was Chase Elliott in 2014 who battled and beat five Sprint Cup regulars including Kevin Harvick and Earnhardt, Jr. to grab win No. 1.

Erik Jones saw Elliott’s win and raised the bar by leading a race-high 79 laps to win from pole position with Brad Keselowski breathing down his back.

With these results in the bag, both Elliott and Jones are in the field for Friday night’s O’Reilly Auto Parts 300. Though a win for either driver will be a fresh change from Kyle Busch’s stranglehold on the series in 2016, we’re talking about first-time winners and if we can see it happen again Friday.

Mentioned before, Suarez is proving to be the odds-on favorite to be the first series regular to grab a win this season. With three straight top 5s and a near-win heartbreak a few weeks ago at Fontana, Suarez is the man I believe can continue the streak of new winners at Texas.

Studying classic photos of Texas, I don’t think there is anything more exclusive than seeing cowboys sitting proudly on horseback while the bright orange sun sets in their wake.

Appropriately, when NASCAR comes to town in Fort Worth, the action doesn’t truly begin until the sun goes down and the finish nears.

Yeah, this may run true for practically every track that runs under the lights, but Texas has the recent numbers to back the hype.

In terms of unpredictability, the last four Texas races have seen the final pass for the lead come in the final 15 laps. Additionally, the spring race has only one repeat winner seen since 1999. A remarkable statistic considering the amount of wins from Jimmie Johnson as of late.

Speaking of Johnson, the most recent race at Texas – shown below – saw a truly shocking end as the No. 48 passed Brad Keselowski, who led an outstanding 312 of 334 laps, with four laps to go to steal the win.

In last year’s spring event, a 21-lap shootout saw Johnson, Harvick and Earnhardt, Jr. slip and slide for the win as they made their way past Jamie McMurray.

Also, both 2014 events were extended due to green-white-checkered finishes, making for a strong streak of exciting finishes at Texas.

Matching the track record, this season has already seen two photo finishes along with two races decided by a race-winning pass in the final six laps.

With tire strategy set to be a major factor on Saturday night, there are solid reasons to expect another nail-biter.