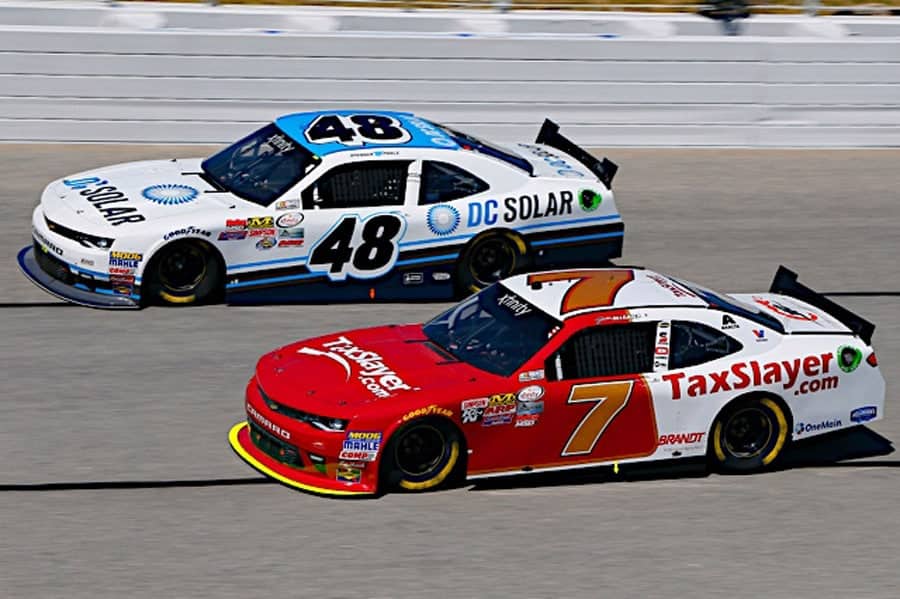 As the XFINITY Series heads to Texas Motor Speedway, Texas native Brennan Poole finds himself 10th in the series points standings.  Poole, who will turn 25 next week, is perhaps the biggest surprise in the top 10 of the XFINITY standings.  So far, he has been keeping pace with his fellow NXS regulars, having posted just one top 10 but four top 15s through the first five races.

Whenever I highlight the top underdog performances of each race in my XFINITY Breakdown pieces, Poole’s name seems to come up.  Yet I am beginning to wonder how much of an underdog he really is.  Poole, after all, drives the No. 48 car for Chip Ganassi Racing, a Sprint Cup team with an XFINITY program.  As any fan of NASCAR’s second-tier series can attest, having a team directly supported by a Cup organization can be a huge advantage.  Poole is not an underdog in the same sense as Ryan Sieg, Jeremy Clements and Ross Chastain, all of whom drive for smaller organizations with no direct Sprint Cup affiliations.  Poole’s closest counterpart is probably Jeb Burton, who races in the XFINITY Series for Richard Petty Motorsports.

That said, Poole was probably not at the forefront of a lot of fans’ minds when considering who might make the inaugural XFINITY Chase.  The deal with Ganassi allowing Poole to tackle his first full-time NXS campaign came together very late in the offseason.  Moreover, it was difficult to know exactly what to expect from Poole.  Last year, the six-time ARCA winner ran 17 races in a combined Ganassi/HScott Motorsports effort.  His best finish was a ninth place run at Las Vegas.  He had a number of other decent results throughout the season, but his most memorable moment was an on-track disagreement with JJ Yeley at Iowa Speedway that resulted in Poole getting parked for the race and torn up racecars for both drivers.

So what should fans expect from Poole this season?  Will he stay in the Chase conversation?  A win would punch his ticket to the postseason immediately, but it does not look like any trip to Victory Lane is imminent for Poole.  His case is not like that of Daniel Suarez, who has been on the verge of his first win since late last season.  The best hope for Poole is to continue to string together enough decent finishes to stay as far up in the points standings as possible.  At the rate that Sprint Cup drivers continue to dominate the win column in the XFINITY Series, it is highly unlikely that there will be 12 NXS regulars who win during the regular season.  In fact, only four different XFINITY regulars visited Victory Lane during the first 26 races of 2015.  Points still matter in this series, and it looks like Poole is in a good position to at least challenge for a Chase spot.

More than anything else, what the XFINITY Series really needs right now is some surprise contenders.  Poole could be that surprise contender in the making.  He may not be a textbook case of an underdog, but a rookie driver for Ganassi’s team stepping up to challenge fellow rising stars like Suarez, Erik Jones, Ty Dillon and Darrell Wallace Jr. would be a good story.  Poole’s brief XFINITY career suggests that he might have a knack for avoiding really bad finishes, a skill that is needed to succeed in the elimination-style Chase.  So perhaps it is time to take Poole a little more seriously as a Chase contender.  He might become 2016’s best example of the XFINITY Series living up to its “names are made here” slogan.

I can think of a number of things that the XFINITY SERIES needs more than some surprise contenders.