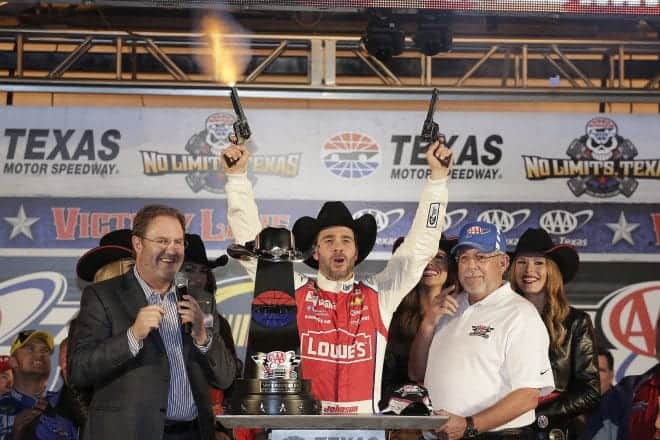 If you could sum up all of the changes that NASCAR has made to the cars, the series, the rules in the last 15 years in one word, it would be parity.

But it’s difficult to create parity. There’s always going to be one team that’s a cut above the rest, one driver who seems to dominate the laps led and wins columns. Some drivers even make tracks their personal playgrounds and win nearly every time they race there. Kevin Harvick has done it recently at Phoenix, and Johnson’s dominated throughout his career at Dover.

Which is exactly why the first dozen years of Texas Motor Speedway’s existence was such a big deal in terms of parity. You see, from the circuit’s opening in 1997 through the track’s Chase race in 2006, there wasn’t a repeat winner at the 1.5-mile track.

That’s right, a dozen different winners. Here are their stories.

If fans thought the inaugural race at Kentucky Speedway had access issues, it was nothing compared to the parking issues fans endured during the 1997 Interstate Batteries 500, where heavy rains flooded the track’s parking lots. Dale Jarrett was handed the pole after qualifying was cancelled, and a first-lap wreck involved 13 cars, including eventual series champion Jeff Gordon. Jeff Burton, then driving for what is today called Roush Fenway Racing, led 60 laps and won the first race of his career and first of two victories at Texas, the latter being the victory that broke the dozen-race streak.

Rain continued to play a part in the 1998 running of the TMS race, with excessive rain leading to weepers on the track during practice and qualifying. Jeremy Mayfield won the pole and led 105 laps but ultimately finished three laps down. Mark Martin, Burton’s teammate at RFR, found himself at the front at the right time and – despite only leading 37 laps – won the race. The win was icing on the cake for RFR, with teammates Chad Little and Johnny Benson finishing second and fifth.

Terry Labonte brought Hendrick Motorsports its first victory at TMS in 1999, leading 124 of 334 laps and getting the checkered flag while under caution after a late-race tangle by Jimmy Spencer and Robert Pressley brought out the yellow. The win was Labonte’s 21st career win, and the Iceman wouldn’t find victory lane again until his triumph in the final Southern 500 run on Labor Day weekend in 2003.

Dale Earnhardt Jr. ran away with the first TMS race run in the new millennium. Earnhardt, then a rookie driving for his father’s Dale Earnhardt, Inc. race team, led 106 laps and his margin of victory was over five seconds faster than second-place Burton. Even more impressive was that it was only the younger Earnhardt’s 12th-career start in the series.

Jarrett drove the big brown truck – okay, the UPS Ford of Robert Yates Racing – to the winner’s circle in 2001. The 1999 Cup champion led 122 laps on the day, one of two drivers to lead more than 100 circuits, and the win was the second of three in a four-race stretch of the 2001 season for Jarrett. Steve Park finished second, and rookies Kurt Busch and Harvick finished fourth and seventh.

In 2002, speeds were reaching such levels that it was rumored that NASCAR might mandate restrictor plates on the cars. Bill Elliott won the pole with a lap of 194.224 mph but did so without the device. The race was also run without plates, and Matt Kenseth returned RFR to victory lane. He won the race by .888 seconds over Gordon and Martin. For the third-year driver, it was the second win of the season and third of his career.

Ryan Newman became the seventh consecutive different winner at TMS in 2003, leading 77 laps after starting third. The Team Penske driver didn’t take the lead for the final time until 11 laps to go, however, passing Earnhardt as the two crossed the stripe. Newman would go on to have a career year, winning eight times and scoring 11 poles, but would finish sixth in the final standings due to seven DNFs.

2004 brought about the track’s closest finish, with RYR’s Elliott Sadler and rookie Kasey Kahne getting to the stripe just .028 seconds apart. For Sadler, the win was his second all-time and for Kahne, the finish was heartbreak for Elliott’s replacement in the No. 9 Dodge. Kahne led 148 laps, but finished second for the third time in the young 2004 season.

RFR swept both Texas races in 2005, with Greg Biffle taking the spring race and Carl Edwards winning the Chase race. Biffle’s win was an absolute domination of the field. He led 219 laps and beat runner-up Jamie McMurray by 3.244 seconds, his second of six victories on the season en route to a tie for second place in the points with Edwards. For Edwards, the win was harder to come by. He had to hold off teammates Martin and Kenseth to come away with his fourth career win.

Kahne’s 2004 disappointment was short-lived, as the Evernham Motorsports driver won the first TMS race of 2006. Kahne won from the pole and led 63 laps in a dominating victory over second-place Kenseth. The margin of victory was 5.229 seconds and gave Kahne his second win in a four-race stretch. The other win came at TMS’ sister track in Atlanta. In the fall, Tony Stewart won the first race at the track for Joe Gibbs Racing, obliterating Biffle’s record of 219 laps led by leading 278, or 82 percent of the entire race. Even more shocking was the Stewart wasn’t a part of the Chase field – he missed the cut and responded by winning three of the final 10 races.

All told, seven different organizations won during the 12-race period. Ford won seven races, Chevrolet three races and Dodge two. Since then, six more drivers have won at the track and Johnson leads all drivers with six victories.

You might think that TMS is no longer the great equalizer that it once was, but think of it like this: only seven drivers have won at the track more than twice, and only two more than three times. Of those, two aren’t in this week’s field – Stewart and Burton. Biffle has been out to lunch the last couple of years. Kenseth has been snake bitten this season. That leaves only Denny Hamlin, Edwards and Johnson as drivers with more than a single victory and a good chance this weekend. The odds are, with 37 other hungry drivers in the field, that none of them will get to fire off that six-shooter come Saturday night.