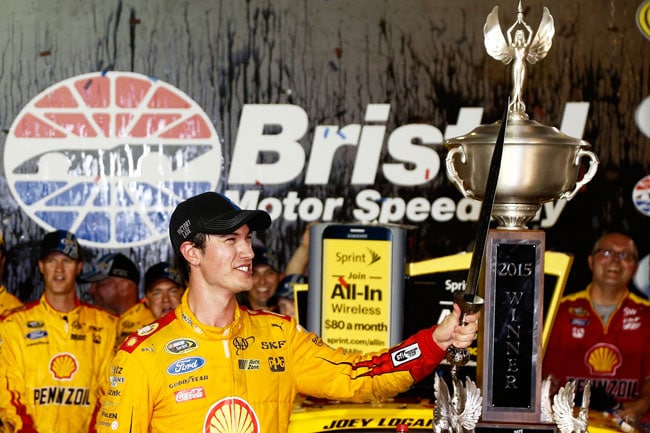 Villain to win at Bristol?

My tip for this weekend’s win is the current pantomime villain of the NASCAR circuit: Joey Logano. It’s a role the Connecticut native spoke about early this season in a USA Today Interview.

“Some of the fans look at me as a villain or not a nice guy for some reason. I don’t feel like that’s the case, personally,” said Logano. “So I disagree with that. But I don’t let that affect me, either – because I know who I am. My friends and family and team know who I am, and they have my back. So I don’t let someone who doesn’t know me affect me.”

And with the boos unlikely to dissipate any time soon, Logano will have to continue with that mentality of not letting it get to him, continue to run up front and concentrate on securing a playoff place in 2016. The nine-year, 262-race veteran – strange to call him that but he kinda is approaching that status now – has won two of the last three visits to Thunder Valley, including the night race last season when he led 176 circuits, including the last 64 laps. Logano is off to a relatively solid start in 2016 with three top-5 runs, including a second-place result at Las Vegas Speedway, a third-place effort last Saturday night at Texas Motor Speedway, 98 laps led and an average finish of eighth. In short, I’d say he’s due a trip to Victory Lane and what better place than NASCAR’s very own Coliseum?

Matt Kenseth will be just fine.

Another week and it’s another relatively disappointing finish for Matt Kenseth. It’s becoming something of a theme in the early stages of the 2016 season; Kenseth has just one top-10 run so far – seventh place at Phoenix International Raceway.

“The results have been disappointing, obviously, but we ran pretty good,” Kenseth said to ESPN prior to Saturday’s race. “We were in contention to win a couple of races. … I feel if you run good enough over time, the law of averages is going to work out and you’re going to win some races.”

And the 2003 champion is absolutely right. If there’s one thing I’m sure of this year, it’s that Kenseth will be just fine, will make the Chase and will contend deep into the playoffs. He’s led 164 laps this season in six of the seven races we’ve run, and were it not for a miraculous last lap pass by teammate Denny Hamlin, Kenseth would have won a third Daytona 500. And speaking of alternate universes, in another world he could also have been celebrating a morale-boosting win at Martinsville. So yes, the results haven’t come but the form is there to suggest that sooner rather than later Kenseth will be visiting Victory Lane (and not to congratulate a teammate either). It could even happen as soon as this weekend at Bristol where Kenseth has four wins, 13 top 5s, 20 top 10s and 1409 laps led.

How many can the Champ win?

What a start to the year for 2015 Sprint Cup champion Kyle Busch. All told, he’s run 13 races (seven Cup, five XFINITY and one Truck) and won a trophy-busting seven. At the lower tier, Busch has been all but unstoppable, winning the only Truck race he’s entered and four of the five second echelon contests leading an incredible 776 of 913 laps (or 85 percent if you prefer). And were it not for a last lap tire blowout at Auto Club Speedway, while Busch was leading, he’d have won all five. Cup-wise, Busch has two wins, two third-place finishes, two fourth-place efforts and just the one outlier: 25th at Auto Club Speedway. In short, not too shabby.

It’s been interesting to watch Busch these past few years. To be fair, like him or not, it’s been interesting to watch throughout his career as he has matured and, along the way, picked up an ever growing fan base, not to mention the validation of a championship. I know folks will gripe that he didn’t run the entire season last year, but the fact remains Busch is unquestionably one of the finest talents in NASCAR this past decade. The only question I have now is how many races can he win this year?

Next Up: Bristol, Richmond and Talladega

I love the stretch of racing we have coming up with events at three of the most iconic, and typically exciting to watch, tracks in NASCAR: Bristol Motor Speedway, Richmond International Raceway and Talladega Superspeedway. Bristol hardly needs any introduction, but it will certainly be a different look at Richmond, where the race has shifted from Saturday night to Sunday daytime. In a recent tire test at the venue, Virginia native Hamlin was encouraged.

“Last year it didn’t seem like the track rubbered up a whole lot. I definitely feel like we have improvement,” Hamlin said to the Richmond-Times Dispatch. “We got a little bit faster on the frontside and a little bit slower on the backside. So we’re very encouraged by that. I love day races, and obviously it’s going to be a pretty exciting one.”

And speaking of excitement, we’ll have that all day long on the treacherous high banks in Alabama. It’s a fun stretch to watch these next three weeks and I, for one, am looking forward to it.

And finally, a quick word on this year’s race at the Lady in Black, Darlington Raceway. Last year, it was without question the promotion of the season, so I’m glad that once again we’re looking forward to another Southern 500 Throwback Weekend. Custom special paint schemes are starting to be announced with Ricky Stenhouse, Jr. the latest.

“Darrell Waltrip is one of the icons in our sport and has helped build NASCAR into the sport it is today,” said Stenhouse. “It is a huge honor to be able to run the 1975 throwback paint scheme of Darrell’s at Darlington. Darrell’s last win was at Darlington so only seems fitting that we get his throwback paint scheme in victory lane on Labor Day weekend and have Darrell celebrate with us.”

It’s hard to see how the track can top the success of last season’s promotion but anything close would do just fine. This is, as always, a race to circle in the calendars.

Once Joey starts to shave, he needs to grow a Snively Whiplash mustache to be the real image of a villain LOL