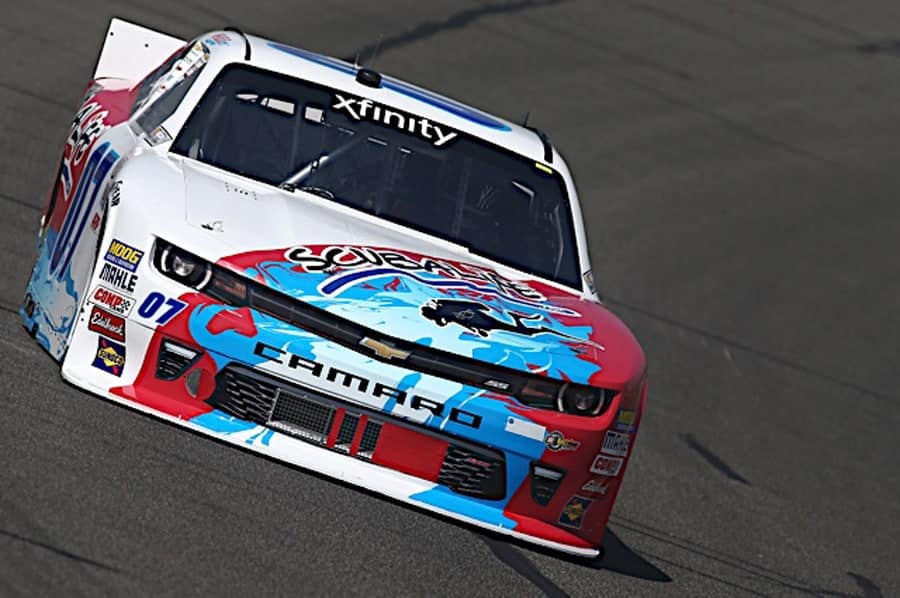 Last Friday night, Ray Black, Jr. returned to Texas Motor Speedway, the site of his XFINITY Series debut last November, with high hopes to improve upon his finish. After all, the last-minute deal wasn’t the ideal debut since Black suffered a broken shock that left him simply riding around, running laps with little hope of running the preferred high line. He ultimately walked away with a 27th-place finish, eight laps off the pace, wishing he hadn’t had to deal with a broken part so he could race the way he wanted to.

Fast forward to 2016 when Black made the move from Truck Series competition to run full-time in the XFINITY Series. For SS Green Light Racing and owner Bobby Dotter, the move presents a new challenge as it’s the first time the organization has competed full-time in the series.

“We ran one XFINITY race with Ray last year, and it went much better than everyone expected,” team owner Dotter said in a team release before the season began. “Ray really took to the feel of the car! Our goal was always to be in the XFINITY Series with Ray, we’ve just sped up that timeline a little bit. Ray is ready for the step up, and the team is ready to grow with him.”

For Black, the decision to make the move to a new series was the next logical step for him when it comes to “overall exposure.”

“They have more races, longer races, a lot more competitive teams that are on our level race-wise,” he explained. “That was a big part of it, and if you have the means and budget to do it, you definitely want to step up. It’s always good to have more experience in another NASCAR series like the trucks; it’s a good stepping stone.

“At the end of the day, this sport moves fast, and if you’re not moving up with it, you’re not doing something right. We had the opportunity to do it and we jumped at it.”

But moving from Trucks to XFINITY, especially for a team that hasn’t raced full-time in the series, isn’t without its challenges.

“It’s been a roller coaster; it hasn’t been easy for the team and a driver. We had to buy all new cars; they changed the setups on the cars,” Black said at Texas Motor Speedway on Friday. “All of that coming in and the transition from Daytona to here has been pretty difficult, but it’s been a good learning curve for all of us.

“We knew it was going to be hard – it’s been a little harder than we expected – but that’s what makes it fun. It’s a long season.”

The rough start that Black has faced has certainly helped him develop as a driver, and he said “there’s a lot of lessons I’ve learned, but patience is a big one that I’ve come to learn the hard way.

“Most of my life, everything’s worked out the way I wanted it to, and even when it doesn’t, it always seems to work itself out after a while,” he continued. “It seems like right now, nothing is going my way. It’s already five races into it; I’m just waiting for that curve to come and turn back up. It’s tough times, and we all understand that. We’re not getting our heads down, and we’re looking for it to pick back up because that’s where it’s really fun.”

The season certainly hasn’t been kind to the No. 07 team either. Coming into Texas, Black had a best finish of 25th, and it wasn’t easy along the way.

“[The biggest challenge has been] getting the handling somewhere close to where we can have a decent race and stay somewhere competitive,” he continued. “That’s been the hardest part; we haven’t been anywhere close to what we wanted to run. We’ve had some instances where we’ve had some speed and shown some promise, but for the most part, it’s just been us struggling and behind the ball.

“At Daytona, we ran out of gas, Atlanta we had a right front go down. In Phoenix, we had an oil line bust and total a car. Things like that add up – we’re a small team, so we don’t have many cars, so we’re struggling to get to what we can. I think we’ve caught up now. We got some brand new cars – like five I believe – so we’re getting back on track. Those two weeks off were really good for us.

But returning to Texas, where the team already had a few notes from last season, the energy around the team was different as hope loomed for progress and a momentum swing that they so desperately wanted.

“I think coming back here to a track we came to last year is a good starting point to get back on track with some good races,” he said with a smile. “I think to come out of here with a top 20, we would be a lot happier than we’ve been doing.

“We actually gained a lot in practice. I know we weren’t fast on the board, but I think long-run speed we gained a lot. We got to try a lot of different setups, which was good. Coming back here, we had a good base point where we could run the same setup as last year and be pretty good. But we could also throw some new things in there that I haven’t tried before. We were running more yaw, and I never felt that before in a car, so we were able to throw that in there for practice to see if I liked it. I liked it a little bit, so we can start moving toward that. We were able to compare things from last year. We need to finish a race – that would be a good start – and a top 20 on that would be great.”

When the checkered flag flew Friday night over Kyle Busch’s dominant victory, the top 20 isn’t quite where Black ended up, though he was close and did score a career-best 22nd-place finish.

Awesome day with my guys! @DaleJr unknowingly blessed our car. Thank you bud!! We owe you one! 🙏🏼 pic.twitter.com/XxMXq22YC5

“What an awesome weekend with my team!” Black said after the race. “It’s great to see all our hard work come together like that and result in our best finish in the XFINITY Series. This finish gives us something solid to build on. Toward the end of the race, it was just a matter of finding a good spot on the track and surviving until the end. I’m looking forward to continuing with this momentum at Bristol Motor Speedway next weekend!”

Many of the sport’s greatest drivers grew up in a racing community, often following in the footsteps of family members ahead of them. But for Black, that wasn’t the case; his family background came in the form of deep sea diving off of the coasts of Florida, but at around 14 years old, he finally convinced his dad to let him give it a try.

“I played video games, watched it on tv a few times,” he said, thinking back to how he first got involved in racing. “I liked driving around the yard, so I always had something that got me going with speed, and it all just fell together. I asked my dad if he would get me a car, and we went down to the track. It took a long time to convince him because at 14, you’re just wanting to do everything and nothing’s serious at that point.

“Eventually, I got behind the wheel and did pretty good and won some races. Ever since then I’ve been hooked. It’s different when no one in your family has done it; you don’t know what to expect. It’s been a wild ride.”

In just his eighth career Camping World Truck Series start last season, Black started turning heads after posting a fifth-place finish in the season opener at Daytona International Speedway. Though that fifth would prove to be the lone top-10 result Black scored during the 2015 Truck Series season, a quick look at his results shows the improvement as the team went almost the entire second half of the season without a single finish outside the top 20. He ultimately finished 11th in the drivers’ standings, hardly a bad year, especially for a small team working against the powerhouse organizations in the series like Kyle Busch Motorsports, ThorSport Racing and the like.

Asked if he had any plans to drop back and run in the Truck Series this year, Black’s eyes lit up, indicating “I definitely want to, but you know how that goes. If I could run any races, it would be Eldora, first and foremost.”

For Black, the transition to the XFINITY Series hasn’t been the easiest for him, or his team competing full-time for the first time in the series, but it’s one that was the most logical for the 25-year-old, who would like to continue the move up NASCAR’s development ladder. There’s no telling what the season might hold for the No. 07 team, but you can bet that its drive to improve will continue, regardless of the hardships faced.