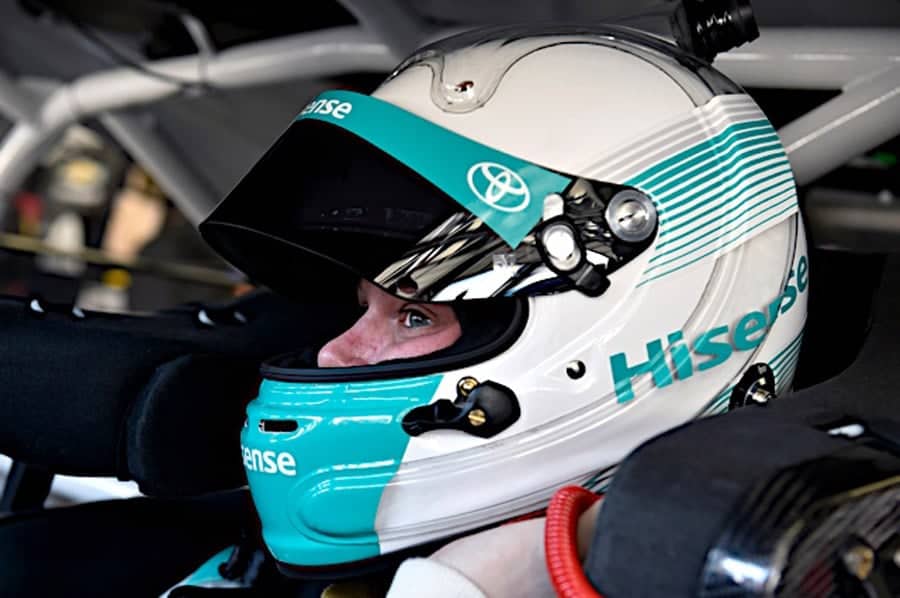 The NASCAR XFINITY Series regulars are no longer winless in 2016.  Erik Jones nabbed his first win of the season, and the third of his XFINITY career, by passing Kyle Larson with three laps to go in the Fitzgerald Glider Kits 300 at Bristol Motor Speedway.

Jones had lined up fourth on a late restart, directly behind Larson who had opted to restart on the outside as the leader.  Larson and Jones broke away from the pack when second place Kyle Busch struggled to get rolling.  Larson held the lead until Jones got an excellent run into turn 3, allowing his No. 20 to pull even with Larson’s No. 42 with two laps to go.  Jones held the advantageous high line and was able to complete the pass the following lap, bouncing off Larson as the two drivers fought to hang on to their cars.  Jones took the white flag and held off Busch over the final lap as Larson faded to third.

“We got a really good restart, and Kyle (Larson) just left the top open, and we went up there, and he worked pretty hard to keep us behind (him)” Jones said in victory lane.  ‘We just kept digging, and it worked out… couldn’t be happier to get this Gamestop Camry to victory lane.”

The win all but guarantees Jones a spot in the inaugural XFINITY Series Chase.  He also won the first Dash 4 Cash bonus of the year by being the highest-finishing eligible driver.

“I figured at some point in the year we could get a win when those guys (Busch and Larson) weren’t in the field, but I knew it would be a tall task to do it with them in the field.” Jones said. “To do it at Bristol, those two guys, that’s one of their best tracks, I would say.”

Indeed, the ongoing battle between Larson and Busch looked like it would overshadow everything else at Bristol, even the debut of the heat race format in the XFINITY Series.  Jones started on the pole and led wire to wire in the first heat, while Larson and Busch placed second and third respectively.  Busch spent most of the heat tailing Larson, keeping the No. 42 in his sights but not being able to complete a pass.  Justin Allgaier finished in fourth place, allowing him and Jones to become Dash 4 Cash eligible.

The second heat race featured Austin Dillon leading every lap en route to victory, followed by his brother Ty, Joey Logano, Daniel Suarez, and Kevin Harvick.  The highlight of the race was a three-way battle for second between Ty Dillon, Logano, and Suarez that lasted nearly the whole race.  Ty Dillon and Suarez became the other two Dash 4 Cash drivers.

The 200 lap main race began with Jones and Austin Dillon on the front row.  Jones led 59 of the first 60 laps, but surrendered the top spot to Larson after getting hung up in lapped traffic.  Busch, who had lost a number of spots at the start of the race, took the lead from Larson two laps later.

Once Busch and Larson were running 1-2, everyone else almost became an afterthought as the two Kyles put on a great display of racing.  Larson took the lead back on lap 103 after muscling his way past the lapped machine of Brendan Gaughan.  He then spent the rest of the race doing everything possible to hold off Busch.  Both drivers had to fight each other, the track, and lapped traffic over the next 90 laps, and they could not seem to get away from each other.  The race was setting up to be another “Kyle and Kyle show” until Mario Gosselin and Ryan Reed made contact on lap 188, setting up the final restart and giving Jones a chance to take the win.

Understandably, Busch and Larson were not too happy with the outcome.

“Restarts were horrible for us today,” Busch said after the race.  “When I’d go to the gas, both times, the car just shut off and wouldn’t go.

“It’s frustrating when you’re in position, you have a chance, and you just throw it away,” Busch added. “Obviously Jones was in a really good position there, but great job to those guys.  He deserves the win, but the two cars who were the class of the field, they didn’t win today.”

Larson was similarly disappointed after the race.  “(I) didn’t really want to see that caution, knew I was tight on short runs, and just did a really bad job on that restart, a really, really bad job.

“We always have speed here when we come; I’ve been in the top three so many times here, (but) I’ve yet to get a win,” Larson added.  “Really disappointed myself, hurts to loose ‘em like that, but learned quite a bit for tomorrow, and hopefully our Cup car’s good there.”

It was another “close, but not quite” day for Suarez.  The No. 19 was in third late in the race, even after running into Reed, and Suarez was in position to win the Dash 4 Cash.  The last caution, however, gave Jones another shot and caused Suarez to get bottled up behind Busch on the last restart.  Suarez wound up sixth but increased his points lead to six over Jones.

Illness, plus a pit road speeding penalty, plus a flat tire equaled a bad day for Darrell Wallace Jr, who finished four laps down in 25th.  “Bubba” is now tenth in points and struggling to find momentum after an up and down start to the year.

Once again, the Fox Sports 1 team let the fans down, this time by a seemingly unending string of plugs for the network’s baseball and UFC programming.  Some degree of promotion for other events is to be expected on any network, but FS1 went way too far.  Throw in Larry McReynolds’ cringe-worthy attempts to sound like a UFC authority, and it was not a pretty picture.  The folks in the broadcast booth need to focus on the race and not be a mouthpiece for FS1.

There were no big surprises here.  Jeb Burton, Brennan Poole, and Ryan Sieg scored top 15s, but taking team budgets into account, Sieg’s result was the most impressive.

Surprisingly, Joey Logano and Kevin Harvick were nonfactors in the main race.  Logano’s car jumped out of gear early in his heat, causing some concern in the No. 22 camp.  Logano had no further issues but never seriously challenged for the win, ultimately finishing ninth.  Harvick made some noise in his heat but was invisible in the main and wound up eighth.  Austin Dillon finished fourth in the main after dominating his heat, while Aric Almirola finished tenth.  Josh Wise in 39th and Matt Dibenedetto in 40th anchored the field.

“It’s all about track position right now, as this track goes through a transition and seeing where it goes to by the end of this race.  Working lapped traffic is probably the most important thing.” –Joey Logano after finishing third in his heat

“I’d love a softer tire here, that would be awesome, because then we could pass… Goodyear brings a great tire, it just doesn’t slow down.” –Brendan Gaughan after finishing sixth in his heat

“We had a great day today, it was fun.  I hope Bristol didn’t disappoint because it was definitely fun behind the wheel.” –fifth place finisher Justin Allgaier

The first heat race event will not be remembered for the new race format.  It will be remembered for the thrilling racing between Busch and Larson.  Lap after lap, turn after turn, both drivers were racing on the edge of control, and one false move by either of them had the potential to ruin the race for both of them.  Saturday’s race was evidence of why fans love Bristol and why drivers want to win at Bristol.  This was not a casual afternoon cruise, not even for Busch.  While no professional auto race is easy in reality, some of his victories this year have looked too easy, fueling the fire of complaints against the reigning Sprint Cup champ.  Yet nothing came easily for anyone today.  Jones may not have had the best car, but the No. 20 team finally had a mistake-free race and was in a position to capitalize at the end.  He beat the best, and his place in the Chase is well-deserved.

As for the heat races, it became clear that drivers were more concerned about protecting their cars then really racing hard, even with the potential for improving their qualifying positions.  On a short track where passing is difficult and things can get out of hand quickly, perhaps playing it safe was the best strategy.  It will be interesting to see how those strategies change next week and beyond.

The second heat race event, and the second Dash 4 Cash race, will take place at Richmond International Raceway on Saturday, April 23rd.  Coverage of the ToyotaCare 250 begins at 3PM Eastern on FS1.

Why did the last caution have all the cars make their pit stops, then the service trucks came out on the track to pick up debris? Did I see that correctly? Love or hate Kyle Busch, he sure helped make those last 30-40 laps fun to watch. Did you ever wonder if everybody raced with that intensity there may be fewer empty seats?