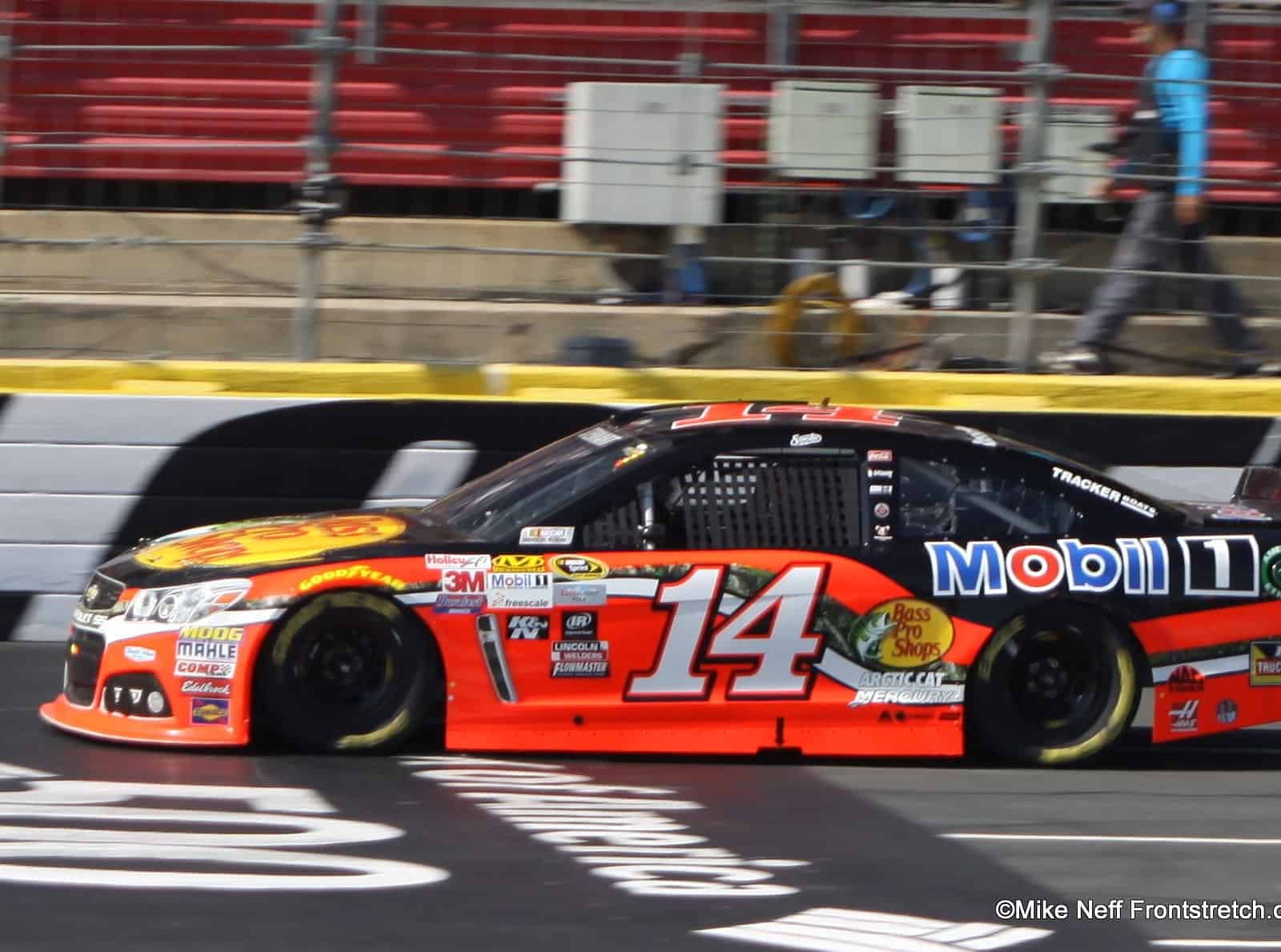 These last few weeks and months must have seemed like an eternity to Tony Stewart, a man whose life has been heretofore defined in fractions of seconds.

They certainly seemed as so to his fans, who have been awaiting Stewart’s return since the three-time Sprint Cup champion was sidelined by a freak injury in an off-road accident in the off-season.

But now the wait is over and Smoke, as Stewart’s been known since long before he climbed in the window of a Cup car, will be back behind the wheel this weekend at Richmond International Raceway, a track where he’s got three wins to his name.

It’s not the first time Stewart has been out of his car for an extended period. He missed 14 races in 2013 after breaking his leg in a sprint car race.  A year later, another sprint car tragedy kept him out of the seat for three weeks.  That time, it was the unspeakable tragedy of having accidentally struck and killed another competitor that sidelined Stewart.

The scars from both accidents are visible and permanent.  But each time, Smoke rose from the ashes like a phoenix, a bit worse for the wear, perhaps, but still fiery as ever.

But this time it’s different.  There was an undeniable sense of urgency this year, as the opposed to the “he’ll be back when he’s really ready” take in 2013 and 2014.  This time, NASCAR Nation needed Stewart back—Stewart needed to be back—because the number of times he’ll race in the series are numbered to the number of races left in the season at his return.  Stewart announced last season that this year would be his last in a Cup car; his replacement has already been hand-picked and is biding his time waiting to fill a seat that can’t quite ever be filled.  So this time, every race Stewart is in the car is something to be relished.

There aren’t many drivers like Stewart anymore, if there really ever were.  At once irascible and lovable, Stewart’s volatile temper is often only over shadowed by his huge heart. On the track, he commands and demands respect; off it, he gives selflessly not for the good PR it generates but because he feels it’s the right thing to do. He’d actually prefer if nobody found out about many of his good deeds.

As a competitor, Stewart is without a doubt one of the finest to ever strap into a racecar—any racecar.  Sprint cars are his first love and where he first made a name for himself all those years ago now.  He did something in USAC that many said would never be done: winning the Triple Crown of championships with titles in the Silver Crown, sprint car and midget divisions all in 1995.  Only one other driver (JJ Yeley) has since accomplished the same feat.

Stewart is also an IndyCar Series champion and has three NASCAR Sprint Cup titles to complete his resume. He’s one of only two active drivers to have a Cup championship from the days when it was still a full-season title—something even Jimmie Johnson, the only active Cup driver with more Cup wins than Stewart, can’t claim.

In the racecar, Stewart is aggressive and driven.  He’s not afraid to move a competitor out of the way if they’re clogging up the groove, and he’s not above putting one in the wall if he feels wronged.  He’s old-school, reminiscent of drivers like Earnhardt and Waltrip.  Sometimes it almost seems like Stewart was born in the wrong era; he’d have thrived in the hard-nosed days before the sport went corporate.

And it’s because of NASCAR’s corporate tendencies that the sport needs Tony Stewart, even for the very short time he has allotted himself.  Stewart knows how to play the game and has played it well, evidenced by the four Sprint Cup race teams under his banner.  But Stewart is not and never has been defined by the corporate machine as some other drivers have become.  He’s never pretended to be something he’s not for the benefit of anyone, and that’s something his fans relish, because so few drivers live life by their own rules.  Stewart lives his by nobody’s rules but his own.

Will Stewart, who has struggled mightily since his broken leg, make one last run at a fourth title this season?  It seems unlikely, but Stewart has never been one to follow the status quo, and he’s certainly skilled enough to pull it off, at least if his body can keep up with his mental ability.  Kyle Busch, after all, proved just a year ago that a terrible injury can heal on the road to a championship. NASCAR has already obliged by giving Stewart a waiver, should he be able to win a race and slide into the top 30 in points by September.

If Busch can do it, then, based on pure skill, so can Stewart.  But practicality says that Busch was in the prime of his career when he made his comeback, while Stewart is entrenched in the twilight of his.  But Stewart, as long as he’s strapped into something with wheels and an engine, is arguably the best pure racer of his generation.

A last brilliant season by Stewart is exactly what NASCAR needs.  The racing is the best we’ve seen in years, but a driver of Stewart’s caliber only raises the bar another notch.  In a sport filled with excellent drivers, Stewart still stands out as something special.  In a world that’s become, perhaps, too bland, Stewart injects an explosion of color.

NASCAR needs Smoke back, even if only for his swan song.  May it be one for the ages.

This years “Kyle Busch Cinderella 2016 Champ Story” created and brought to you by NASCAR and the big sponsor of DAYTONA RISING…TOYOTA. But wait…stop the presses…will it come to pass in the WWE style of entertainment NOT racing as it did last year! What will happen this year, so far it ain’t looking good.. TONY has to write a 35,000.00 check for telling the truth about the lug nut issue…AND SHR is going to the lowly Fords next year. HMMM, NASCAR hates FORDS, their checks don’t seem to be big enough. What story line will Tony play in the WWE this year?????? Stay tuned!!!!!!!!!!!!!!!

Yes, the first amendment means nothing in NASCAR’s dictatorial world. Tow the line or pay the price.

As for Stewart-Haas switching manufacturers in 2017, I was shocked at that particular move. First, I was hoping Ford would tell that brainless wonder in Daytona to take his “entertainment” and shove it where the sun never shines. Second, back when Saint Gibbs Racing switched from Chevrolet to the almighty Toyota, Chevrolet worked a deal to buy out Stewart’s contract with Saint Joe, and worked a deal with Hendrick and Gene Haas to get Tony set up with his own team. Now, Chevrolet let Stewart go without so much as a fight to keep him. That makes me go Hmmm….

I wonder if Tony’s return will result in a rise in ratings and attendance for Brian’s WWE show?

Is Brian working on a plan to get Gordon back in a car for the “all-star” race? It looks like he’s having too much fun working with the Waltrips to do that.

So what exactly does Tony’s return mean?
Nascar is 35k richer and Danica will probably climb one spot in the finishing order…
either way I’m still hardly interested

Venture beyond the SAFER barriers of Frontstretch and fans like Amy will see a different reaction to Tony Stewart’s return. Other sites have posters proclaiming the Killer is coming back and spewing forth the hatred that FS writers and readers generally reserve only for Kyle Busch (the best pure racer in NASCAR).

And look at Stewie’s waiver and his plans to EXTEND the waiver by skipping Dega. If there were an ounce of honesty among the FS writers or commenters, that would be cause for outrage. But at this site, hypocrisy will always reign highest.