Off the Wall With: Landon Cassill

We’re back for season two of Off the Wall With… and we’ve got five brand-new questions for your favorite racing personalities!  This week, NASCAR Sprint Cup Series veteran Landon Cassill stops by. Cassill, driving for Front Row Motorsports full-time this year led 20 laps at Bristol last weekend in arguably his strongest performance to date at stock car racing’s highest level. Cassill was in position for a top-10 finish until a late-race incident with Ty Dillon sent him spiraling back to 22nd by the checkered flag.

Landon Cassill: It was a go kart, and it was No. 6. I had it painted like Mark Martin.

Cassill: I had to change my shifter handle under a caution at Kansas once.  The shifter broke at the start, and I was able to get it stuck in gear at the start the race, and fortunately there was a caution really early on.  The guys were trying to figure out what to do, and I asked them to hand me the wrenches and a new shifter handle.  They couldn’t believe it, but I changed the shifter handle during the race.

Cassill: It was some indie rock band in Ohio at like a summer festival-type thing.  In high school, I liked going to shows, but I didn’t really get to go to too many because I was racing so much.

Cassill: My entire life is a practical joke sometimes.

Cassill: Are you kidding me?  I was a perfect kid! (Laughter) Anything that’s that bad, I’m still hiding it! 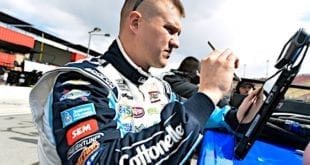 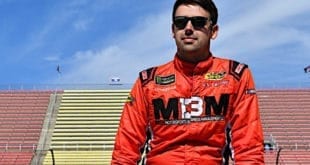 The Frontstretch 5: Drivers Who Might Make a Splash in Top Equipment