Last weekend we were treated to the spectacle that is four-wide drag racing. It happens once a year at zMAX Dragway, Bruton Smith’s Bellagio of drag strips, and the only four-lane strip out there. Smith is kind of a “Go Big or Go Home” guy. One journalist was attending just his second race at the track, which made it his first four-wide experience. He wasn’t impressed. He was pretty much of the mind that drag racing is supposed to be a competition between two cars at a time, not four, and I know he’s not the only one.

Since you’re going to wonder, here it is: I absolutely would not want to see this style in the championship Countdown, and I am really glad, Countdown race or not, that the fall race is in the traditional two-wide fashion. That being said, it’s an interesting concept and it does provide a sense of variety, which is maybe not the worst thing. I’m all right with it. It’s a little like a road course in NASCAR (those I actually love). It creates some situations you will only see at this event. And guaranteed there will be at least one starting line snafu that creates chaos. Lane changes before the start become ballet dances of teams pushing cars around. There will be pedaling and more of it than normal probably because there are two spots up for grabs to stay alive in eliminations.

At the end of the day, it’s a gimmick. Like so many gimmicks, however, it works. Saturday’s qualifying show was sold out and I’ll vouch for it. I’ve never experienced that kind of traffic entering or leaving zMAX Dragway. It’s not NASCAR-traffic Armageddon, but it’s definitely more traffic compared to other years when I drove right in and right out at will. One Twitter user lamented the sellout, cursing the success of the event because it meant it would likely be here to stay. That fan was probably right because it’s delivering just what Smith wanted when he came up with it.

It’s a funny thing about gimmicks. We say we hate them. We don’t want them. Yet we can’t stay away from them. I find appealing to diversity to be a very similar thing. On one hand I don’t like it when racing series pursue drivers solely because of their race or gender. It feels insulting somehow to be reduced to having someone think women will show up if women are on the track. I hate that it’s pointed out whenever a woman does something outstanding. I hate even more being the one pointing it out because I feel like it makes me complicit somehow. We’ve heard it said before: “I don’t want to be the best female driver. I just want to be the best driver.”

At the same time, one of my favorite aspects of drag racing is that it is so diversity friendly and I confess that every time female drivers find success, I do a mental fist pump, falling right in line with the “if you put them on the track, they will come” line of thinking. I hate it, but I can’t help it. We don’t like gimmicks, but we just can’t help ourselves. No, Twitter user, four-wide drag racing is not going to go away.

* Leah Pritchett will be racing in Houston this weekend, surprisingly in the very car she won with earlier this year in Phoenix and with may of the same crew members backing her up.

“I’m so grateful to have growing relationships with sponsors like Quaker State and FireAde that stand behind us, share common goals, and work hard with me to keep in the game. I’m also beyond stoked to have my crew back together for Houston,” said Pritchett.

Pritchett found herself without a ride for the remainder of 2016 after the sudden closure of Bob Vandergriff Racing a few weeks ago and has scrambled to put together backing and equipment to keep racing in an effort to maintain her standing in points while she tries to find a full-time ride to finish the season.

“For now, this BVR-owned and supported operation is hitting the road and we’re headed for Houston.”

2004 – Won the Auto Club Road to the Future Award for the top rookie performer; won four times in eight final round appearances.

Some Things Most People Don’t Know About Jason: Cars are also his hobby as he is a muscle car enthusiast. Although Jason grew up around drag racing, he originally moved to North Carolina to work in the engine shop as a dyno operator for Joe Gibbs Racing in NASCAR. While working at JGR from 1998-2003, Line was part of the engine building team that won NASCAR Sprint Cup Series championships with Bobby Labonte and Tony Stewart. He did not meet fellow Minnesota native and teammate Greg Anderson until Anderson rented shop space in Mooresville, NC, from a mutual acquaintance.

“Long story short, Greg Anderson ended up renting shop space from them over there to run his Pro Stock team out of their building so it was kind of a Minnesota connection because Greg is from Minnesota as well,” said Line. “And when he did, I basically volunteered to help him work on stuff just because I loved Pro Stock. I knew who Greg was. He didn’t know who I was but I just wanted to work on a Pro Stock car.

“Greg eventually offered me a job and offered me the chance to drive a car. I told him I couldn’t leave my job at Gibbs, because I had a really good job, and the only way I would is if I got a chance to drive and he said ‘Well, we’re going to get a second car, so you can drive it.’”

New year, new Frontstretch exclusive NHRA driver videos. First up this week, Brittany Force tells us about her first win last month in Gainesville. She was already looking forward to that second win but had no idea that she wouldn’t have very long to wait as she walked away with the Wally at the Four-Wide Nationals just a couple of days later.

Word of the Week: Horsepower

A value given to the amount of power produced by an engine. Specifically, one horsepower is 550 foot-pounds per second, or approximately 745.7 watts. Top Fuel dragsters and Funny Cars produce 10,000 horsepower. For some fun with numbers and perspective, a NASCAR stock car currently puts out about 725 horsepower. That means a field of 40 cars makes about 29,000 horsepower. Four Nitro cars lined up to run at the Four-Wide Nationals last weekend made 40,000 horsepower, more than an entire field of NASCAR Sprint Cup cars.

A writer for Frontstretch since 2002, and editor since 2006, Toni heads up the NHRA coverage for the site. She’s responsible for post-race coverage in the weekly Pace Laps multi-series round-up along with the weekly Nitro Shots column featuring news and features from the NHRA Mello Yello Drag Racing Series. An award-winning former writer for the Presbyterian Church, Toni works in web design and freelances with writing in North Carolina.
Previous Happiness Is… Tony Stewart
Next Eyes on XFINITY: Has Elliott Sadler Finally Found the Right Team? 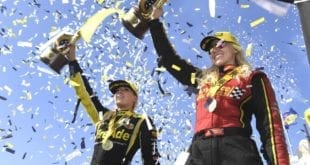 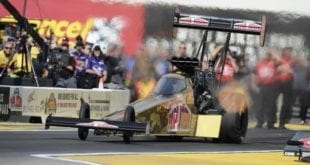