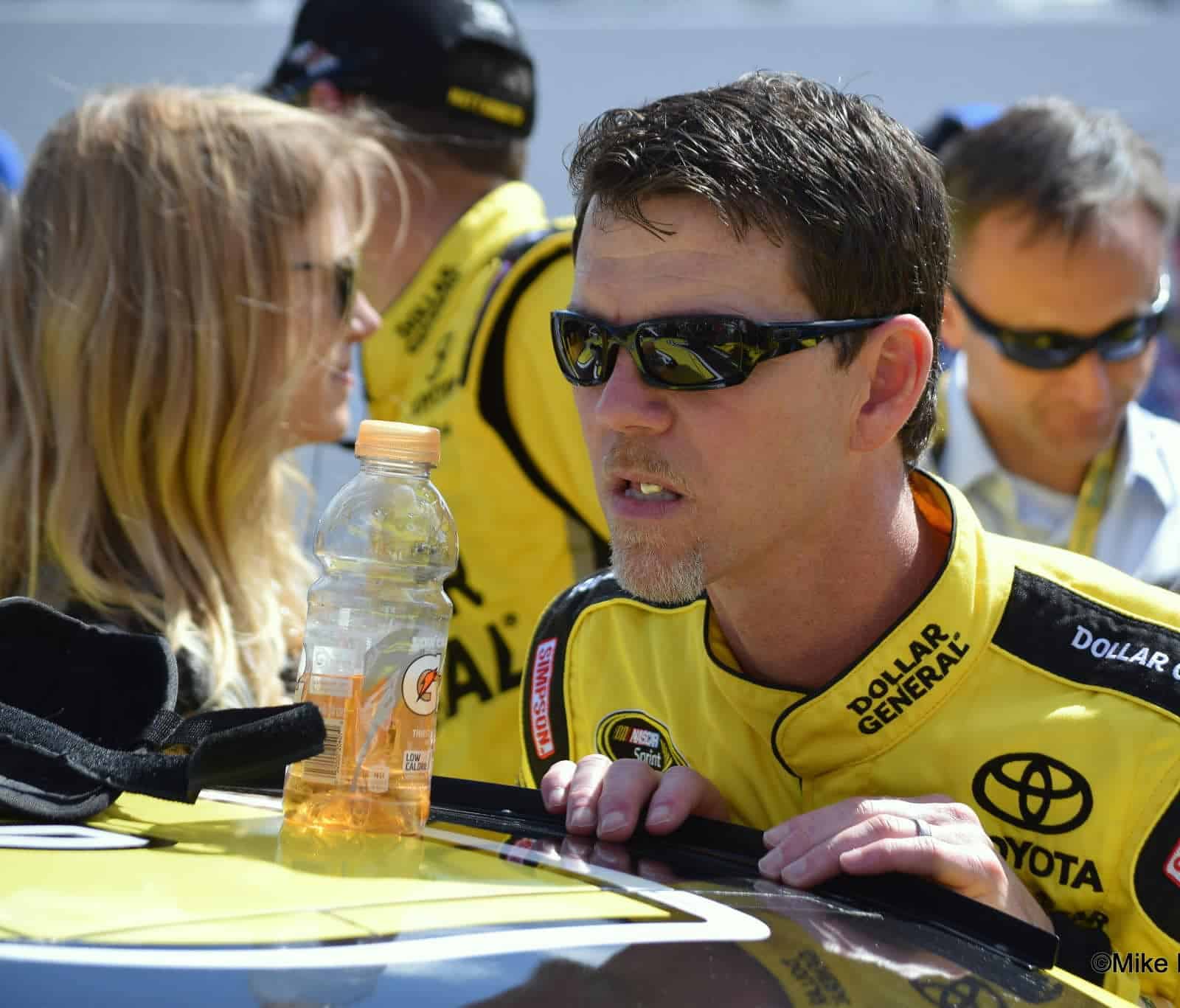 The season has been a challenge for Jason Ratcliff and Matt Kenseth‘s No. 20 team: Part failures, officiating calls and plain bad luck have resulted in many races ending with finishes worse than that of which the team was capable.

While that might have some questioning where their team is headed and what needs to change, Ratcliff is confident that things will turn around and head in the right direction soon.

In this week’s Tech Talk, Ratcliff looks at Richmond International Raceway and how his team overcame the challenges that faced it. He also looks ahead to Talladega Superspeedway and the need to continually update the cars that run at plate tracks.

Mike Neff – Richmond kind of encapsulated your season so far. You looked like you’d be in contention early and then the electrical problem happened. How did you feel about your race before and after the issue?

Jason Ratcliff – We struggled a little in practice getting the car where it needed to be. We didn’t have a tremendous amount of notes on a day race and the direction the track would go. I thought, all in all, we made some good changes and were headed in the right direction, even after we realized we had a problem with the alternator not charging. Once we figured out what our strategy was going to be, with it going green like that it is difficult to come down pit road and make adjustments or change batteries or whatever we were fighting. At that point it was pretty much damage control, just trying to maintain until we did get a caution flag.

We really weren’t overly concerned about the handling or what we needed to do to go forward, just really tried to maintain. Once we got a fresh set of batteries into it everything seemed to be fine. The balance of the car was descent and we were able to make up track position.

I really feel like, if we’d have had more time to work on it, we could have gotten a top 5 out of it. I feel like we overcame some adversity and got a decent finish out of it. That’s all you can ask. Everybody is going to have those struggles occasionally. You try to minimize them but occasionally you’re going to have them and you just do your best to overcome them.

Neff – It seems like you are getting all of your struggles out of the way early in the season. Does that bode well for you that the racing gods will smile on you in the last half of the year?

Ratcliff – You hope so. You see this occasionally, I think it is mainly coincidental, where you have a string of a few unfortunate events (laughs). You just have to look at where you are running and focus on that and stay the course. You know you have a healthy program and eventually, when you have a race where everything goes halfway smooth and you can just race, you’re going to do well.

It’s not like we haven’t been in contention for wins. We’d like to have a win under our belt by this point in the season, but I’m not overly concerned about it. It is frustrating to go out there and not finish where we’re capable of finishing but, at the same time, we have plenty of racing left in the season.

Neff – As an organization, when you attacked last weekend, was everyone trying different things to see what worked the best, or did each team do their own thing and then meld it together for everybody?

Ratcliff – We just did our normal deal. We all unloaded with what we thought we needed to race. I think we were all pretty close. We ran really well there last year. We felt like we had a good baseline to start with. In the end the track was different because of the time of day that we raced. Also, the tire was different. Everybody had to do some work when we got there but, at the end of the day, we were all fairly similar and learned from each other like we do every other week.

Neff – You’re now headed to Talladega for the second restrictor plate race of the year. You were right there in Daytona. Can we assume you’re bringing the same car to Talladega or are you bringing a different car?

Neff – The package hasn’t changed much in the last three or four years. When you feel like you can improve on something is it predominantly from an aerodynamic standpoint versus a mechanical standpoint?

Ratcliff – Yeah, primarily it is all aero. In the offseason you build your speedway cars and you get a few of them in the wind tunnel. You try to make gains and then you pick the best of the litter because you feel like you have a good idea of why it is better than the others. The backup cars that we carry around, especially for the 500, are really good cars, obviously. We were in contention to win that race. You have to keep building them, though. You better keep a good fleet in the shop because you never know when you’ll come home empty-handed and need a few cars before the next race.

We’re always building some and trying to improve on them. You really don’t know if they’re better without taking them to the track and seeing if they are better. This will be a test for us to see if we did, in fact, make it better. If we didn’t then we’ll do something different for Daytona in July.

Neff – Talladega, this time of year, is already getting warm, and you run during the daytime. Do you really have to focus on the cooling aspects of your car running in the packs that you will during the race?

Ratcliff – You do, although our hands are tied pretty much thanks to the rules package. The grill opening is set and you can’t make it any larger. The cooling systems allow you a little flexibility, but you obviously get the best that money can buy. It isn’t really anything different than we had at Daytona, but you definitely have to be mindful of it. It will run a little bit warmer and you’ll push it a little bit closer to the limits of the engine for more laps. It is always a concern. When we go back to Daytona they’re going to have a mandated radiator package which is going to be different than anything we’ve ever run. That’ll be interesting to see how that works out.

Neff – The big talk this week is NASCAR going back to the five lug nut rule. It seemed like you were one of the teams that truly understood and took advantage of four and sometimes three lug nuts, more than anyone else. Was it really a safety concern if you only had three lug nuts tightened or is it more sour grapes from the teams that didn’t figure it out as well as you did?

Ratcliff – Knock on wood, I don’t remember the last time a wheel fell off of a Cup racecar. It is kind of self-policing. A driver isn’t going to go out there and drive around with a loose wheel. You say it is unsafe. The last time a wheel came off of a car at speed I don’t think it was because lug nuts weren’t on it, I believe it was a parts failure. If you are going to out there with no lug nuts on the wheel, it is a safety factor. I don’t know any driver in the sport that is going to do that. If you leave them loose you’re going to have to come back to pit road and put lug nuts on. It is the same for everyone.

I don’t agree with it, but whatever. I think there is a different agenda there. I think the drivers who are complaining about it think that going back to five lug nuts is going to close up the gap between their pit crew and others and reduce the disparity on pit road. Is that true? I don’t know, we’ll see. I think they’re using the safety factor thing as a lever to get NASCAR to go back that direction, and obviously it worked.

You know what, driving racecars isn’t safe. If you’re going to go out there and drive around with no lug nuts and a loose wheel you have bigger issues than making a rule of putting five on. It is another political/media/hidden agenda to get someone’s pit crew closer to where they think they need to be.

Neff – Looking at this updated rule, are they saying the lug nuts have to be on the studs, or is it a matter that they have to be on at the point in time you put them on the car?

Ratcliff – All five lug nuts must be installed in a safe and secure manner at all times. That doesn’t mean tight. I don’t know what their definition of safe and secure is; they need more clarification. It is kind of like [how] the gas man can’t make a pit stop move when he’s plugged in. Well, what is a pit stop move? They need to clarify that better.

I don’t think, at this point, anyone knows what they want. I wish they’d just say what they want. I don’t know that, during the race, unless they see it from some other form of technology I don’t know how they are going to mandate it or officiate it. After the race, when all of the cars come down pit road, if there aren’t five on there then somebody is going to get in trouble.