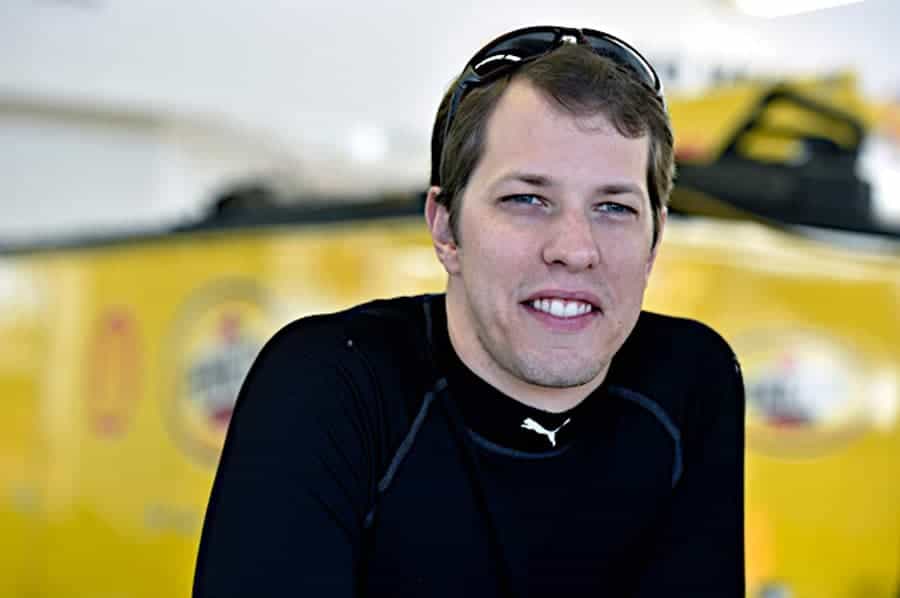 Though the race was marred by three airborne racecars and a big one of more than 15 cars, Brad Keselowski will remember Sunday’s GEICO 500 as a winner after holding off Kyle Busch to win at Talladega Superspeedway.

For Keselowski, the win is his second of the 2016 season and fourth at the 2.66-mile track.

“The guys at Team Penske gave me a great Miller Lite Ford,” Keselowski said. “That’s one of the tickets of staying out of the wrecks at Talladega is if you can stay out front. Daytona didn’t go the way we wanted it to go, we thought we were going to be better than that. It’s Talladega and it’s my fourth win here – I never thought I’d win at Talladega four times!”

As they came through the tri-oval, Kevin Harvick was turned up into the wall by Landon Cassill, sparking a seven-car crash that saw Harvick get up on his side momentarily before landing back on all four tires. The hit was similar to Bill Elliott’s accident at that very point in 1998.

“Landon Cassill tried to cause a wreck for the last 40 laps and he finally got one there in the end,” said Harvick, who slid across the line 15th. “We got shuffled out there and [had a] pretty pretty big wreck there in the end.”

Finishing second under caution was Kyle Busch, who finishes in that runner-up spot for the second straight week.

“There were some moves that you made that were just lucky and just trying to get through some of those holes that were there,” Busch said. “Second is not bad. I think the quota of three cars almost on their lids today is a little high. But that’s racing.”

More often than usual, Sunday saw a number of violent wrecks take out contenders. Whether they were running up front or in the back by themselves, the race was full of carnage.

The first accident of the day occurred on lap 50 when race favorite Dale Earnhardt, Jr. lost his No. 88 Chevrolet off the second turn, collecting Hendrick Motorsports teammate Kasey Kahne and Matt DiBenedetto.

After repairing the damage, Earnhardt returned to the track before his steering wheel came loose while circulating under caution. Later on lap 109, Earnhardt was the victim of a blown tire by Carl Edwards, ending both drivers’ day.

“That was just a freak deal,” Earnhardt said of the steering wheel malfunction. “We’re working on something to keep that from happening moving forward. We were just out there riding around and something broke on the [No.] 19 and he came up into us.”

The first of three airborne accident occurred just past the halfway point when Chris Buescher was clipped in the right rear, forcing the No. 34 into a barrel roll down the backstretch. Buescher would walk away unharmed.

Kasey Kahne would have a single-car crash into turn 3 before the Big One hit with 27 to go. The 17-car pileup including the likes of AJ Allmendinger, Ryan Newman, Ricky Stenhouse, Jr., Regan Smith and Kyle Larson, who spent nine laps out front before the wreck.

The No. 3 Chevrolet of Austin Dillon was involved in the Big One, but was able continue on and fight for the win on the last lap. Finishing third, Dillon breaks his previous career-best effort in the Sprint Cup Series.

“We had 15 pit stops today,” Dillon said. “What we’ve been really focused on going forward is not to panic. And nobody panicked. Those clean cars were just too good for us there.”

In Dillon’s wake was Chase Elliott, who managed another top-5 finish in his rookie season after winning the pole on Saturday afternoon.

“I thought we were pretty lucky to get where we got to,” Elliott said. “I didn’t do a really good job in those prior two restarts. We tried there in the end and just didn’t have enough momentum to get to those guys.”

One of the key stories of the afternoon came from the No. 14 camp when Ty Dillon took over the reins of the Chevrolet during the lap 50 caution. Making the transition in quick time, Dillon was able to avoid the melee en route to a sixth-place finish.

Stewart was visibly upset following the lap 50 change, saying it sucked to get out of a perfectly good racecar.

Seeing as though the on-track action was as dangerous as ever, it may have been a good decision to sit this one out for the most part. The most severe accident of the day occurred with seven laps to go when Danica Patrick got turned into the Toyota of Matt Kenseth. Kenseth’s No. 20 shot up into the air and took flight right into the inside SAFER barrier, while Patrick suffered a monumental blow into the same protected wall. After Kenseth slid on his roof and landed on all four wheels, Patrick was visibly shaken after the crash.

“The [No.] 95 [Michael McDowell] was drilling me, turning it sideways every time,” Patrick said. “I know I got drilled from behind and turned sideways and hello wall.”

After the second backstretch ride for Kenseth at Talladega – flipping an XFINITY car there in 2009 – he was more upset over an earlier block from past [and present] rival Joey Logano, which put Kenseth in a tough spot.

“The first thing that happened is the [No.] 22 ran me off the race track and then got us way behind,” Kenseth said. “I thought we were done with that but maybe we aren’t.”

Logano, who is one day removed from what he called the hardest hit of his career in Saturday’s XFINITY race, finished 25th after getting caught up in that wreck.

“Two days in a row a couple big hits,” Logano said. “I can’t wait to get out of this place.”

Looking past the carnage, the race saw a tremendous amount of competition out front as the field raced the weather from the drop of the green flag. Once the field got past the lap 94 halfway point, it was a show of blocking and lane shifting for the final half of the race.

In all, 17 drivers led the race, with the most being taken by race winner Keselowski.

A Ford won, which, as far as I’m concerned, is good. However, I was hoping so much that Trevor Bayne could have held on and won. Alas, it was not to be. Oh well, maybe next week!

And what is it with Kenseth? He either needs to grow up, or retire. I don’t ever remember him being such a spoiled, whinny jerk when he drove for Roush. Maybe he was, and as I am a fan of Roush, maybe I watched through rose-coloured glasses. But, ever since he’s been at Saint Gibbs Racing, he’s been doing nothing but whining, and always seems to be blaming the guy who got booted out of his ride to accommodate Saint Matt for everything that happens to him. Come on Matt! you haven’t been perfect in your career. It’s racing, and it’s not always going to go your way, so deal with it!

Man, I gotta say I did not see that coming from Matt, guess I should not be surprised. Nobody did anything wrong. Matt is mentally weak and unable to see or deal with reality. Imo. Logano did nothing wrong, he dropped down and Logano let him back in, racing continued uneventfully till someone hit Danica who hit him. The whole race was give and take, everybody was hustling. Logano is in his head 24/7, and the whiner is blaming Logano. Watch the sneaky bastard pull another trick. Not cool.

Yeah, can’t fault Logano for that particular one although you could for the Michael Waltrip ordeal. Logano did enough to himself anyways on the weekend. This race was plate racing at it’s worst. The race was pathetic to watch.

Landon Cassill is spot on about Harvick comments. Hypocritical gibber jabber from Harvick. My God, these guys over 40 are the biggest bunch of babies NASCAR has ever produced. Are these whiners near retirement yet? And do they lie, oh do they lie!

…And plate racing sucks, lets face it. It is for the folks that seem to think the Gladiator days were “exciting”. And NASCAR is pleased as punch with it.

Harvick should keep his mouth shut about wrecks at Talladega. After all, he purposely wrecked half the field on the restart last year in order to keep himself from being eliminated from the chase. As far as I’m concerned he’s just being repaid by that thing we call Karma.