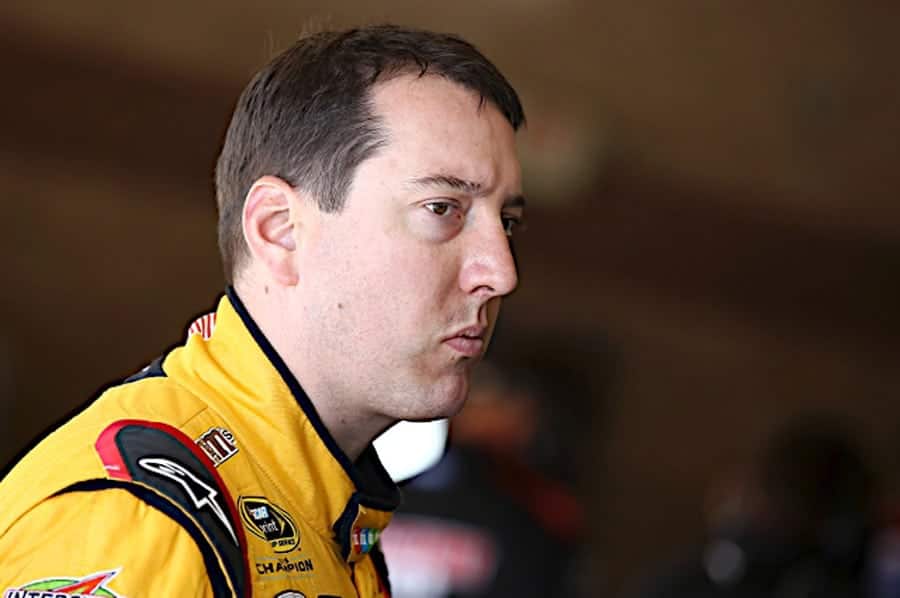 However, I’m not talking about laps at all.

Kyle Busch’s victory in the GoBowling.com 400 Saturday night was his first career win at the facility. It vanquished years of demons there that included an embarrassing Chase incident with David Reutimann and plenty of awful luck. It’s also a victory that means he has won at every track on the Sprint Cup Series schedule…

That’s right. There are two tracks left on the circuit that Kyle Busch has never won at in his whole career.

Busch has 401 Cup starts under his belt over the course of 14 years; in that timeframe, he has won 37 races across 21 different tracks. That includes superspeedways, road courses, intermediates, short tracks and pretty much any other type of place you can race at. Busch has shown incredible versatility as a driver but was excited to check this race off of his win list in particular. The list of Kansas disappointments for Busch had gotten long; he only has three tracks on the schedule where he runs worse than his career average finish there of 19.2.

“This is pretty big – man, there’s been a lot of rough days here at Kansas, that’s for sure,” said Busch. “A lot of good ones too, but I just can’t say enough about this team and everyone on this M&M’s Camry. This thing was awesome tonight. At the beginning and middle part of the race we weren’t great, but [crew chief] Adam Stevens and the guys, they just kept working on it. The No. 78 [Martin Truex, Jr.] was probably the fastest car, but we kept ourselves in the game. It was pretty impressive.”

Truex was certainly the dominant car of the day, leading 172 of 267 laps. However, a loose wheel during green-flag stops put the driver of the No. 78 so far down in the running order so late in the race, he was unable to recover, giving Busch the room he needed to race for the win.

Additionally, a late-race call by Stevens to stay out when many of the lead lap cars pitted gave Busch the clean air he needed to pull away from teammate Matt Kenseth and the No. 4 of Kevin Harvick, who mounted quite a charge before fading with just a few laps remaining.

“He makes a lot of good calls and I’m proud to have Adam Stevens on my pit box,” Busch said. “He does a really good job. The call to stay out, yes. I thought clean air was fast and I knew we had some laps on our tires, but still I felt like our car was really good out front. I was a little worried about Matt [Kenseth] and I’m not sure what happened to him on the restart.

“Then [Kevin] Harvick hounded me for a few laps and he raced me really clean and had a couple opportunities – once off of (turn) 4 and I kind of cut him off a little bit, but when you’re clear, you’re clear and you take that chance. Why it wasn’t there beforehand, I don’t know, but it certainly worked out for us and I’m real impressed to be here and to be working with this team.”

Now, the last two tracks left for Busch to conquer are Charlotte Motor Speedway and Pocono Raceway. Charlotte is a very similar configuration to Kansas Speedway – a 1.5-mile intermediate oval. Pocono, on the other hand, is a very unique track on the schedule, a three-turned triangle versus the traditional four-corner oval design that most facilities have.

Winning at either place doesn’t seem to be out of the question at all for Busch. In his 24 starts at Charlotte Motor Speedway Busch has 10 top 5s and 14 top 10s. His best finish was a second-place run back in the fall race in 2010 along with the fall race in 2011.

In Pocono, his statistics are not quite as impressive but still demonstrate a strong capability of getting to Victory Lane in the near future. Busch has four top 5s and eight top 10s in 22 starts. He has two runner-up finishes there as well.

One has to think that it’s a matter of when (not if) Busch will make it to Victory Lane at both of those racetracks, possibly as early as this season. Considering that Busch already has three wins in 2016 – and his Joe Gibbs Racing team as a whole is showing no signs of slowing down – it’s not unlikely to think he could grab a few more wins before the season comes to a close. Charlotte and Pocono both have two points-paying races apiece so the odds that Busch wins at least one of those four events is fairly strong.

“There’s two that I haven’t won at, and those two I’ve had so many opportunities to win at those places,” Busch said. “I’m pretty confident that we can knock those off the list and I’m excited about that opportunity and working with this team of guys and Adam Stevens and everybody that he has assembled. It’s so much fun. This group is – it really means a lot to me and let’s go on and backup what we did last year.”

Even if Busch doesn’t win at Charlotte or Pocono this season, however, is it realistic to think he’ll get shut out for the rest of his career? Busch is only 31 years old, and it’s not unfathomable to think he’ll probably race for at least 10 more years. Even if that time frame is just five years, you still have to think he’ll make it to Victory Lane at both tracks before he decides to hang it up, however long that may be.

Busch’s win totals are impressive enough as it is, but the wins at various racetracks are what truly make Busch a championship-caliber driver and almost undoubtedly a future Hall of Famer. Even Jeff Gordon, who just retired last year, had one track that he never won at in his career. Granted, that track was Kentucky, added to the schedule late in Gordon’s career, but he was unable to get a victory there nonetheless.

Tony Stewart – a three-time champion who is retiring at the end of this season – is still winless at two places (Darlington and Kentucky). Though he will still have the opportunity to win at both tracks this year, it’s certainly not a surefire expectation that he will make it to Victory Lane. He hasn’t won a race at this point in nearly four years.

Even if Stewart pulls off the unexpected Busch is in a league of his own right now. The reigning champ will likely be able to pull off a historic feat very soon in his career if (more like when) he wins at both of those racetracks. Kansas, his biggest obstacle left on the list, is now gone.

Summer I know you have been waiting all weekend to post this article and are blinded by your love of all things Kyle, but is having a win at every track really that big a deal when the majority of the tracks on the schedule are the same thing? Like his quest for 200 Nascar wins, its irrelevant, but I’m guessing when he gets closer to that you will post an article describing what an awesome feet that would be too.

Hey… At least it’s a Sprint Cup accomplishment, and not an Xfinity one. When I hear how many lower-tier races Busch has won I just yawn. BFD.