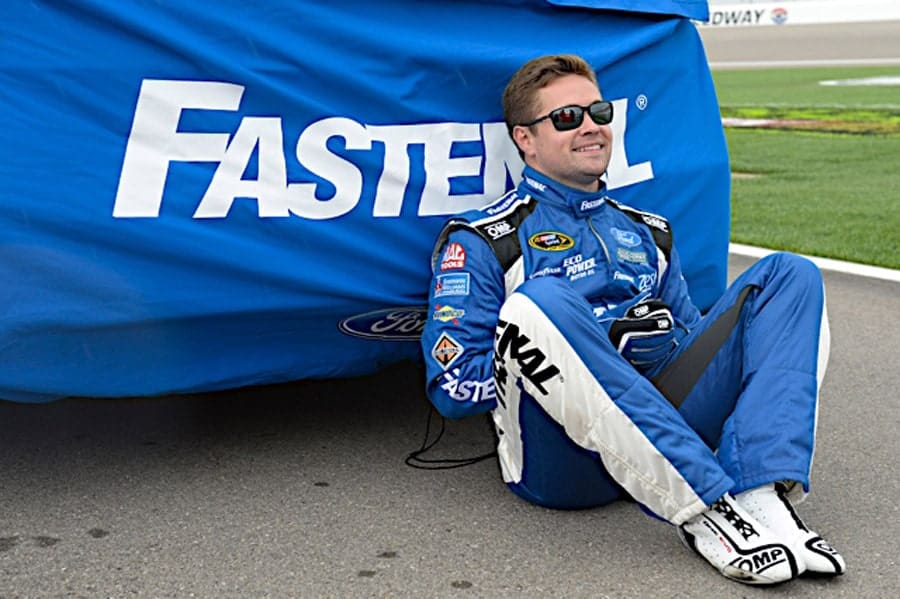 A fresh paint scheme is nothing surprising for Ricky Stenhouse, Jr. The No. 17 car has been soaked in three vastly different colors through 11 races this year.

The plethora of sponsors is nothing new for Stenhouse, who won back-to-back XFINITY (then Nationwide) Series championships in 2011 and 2012 with a Roush Fenway Racing team that fielded either a blank car or one with Ford EcoBoost colors on it.

Stenhouse, 28, is embarking on his fourth full season in NASCAR’s premier division. Piloting the No. 17 car, he went from having Best Buy as a primary sponsor for 11 races, to replacing the loss with multiple companies, including Nationwide Insurance for five races in 2014 and seven the next season. However, he still went unsponsored in a handful of events.

Whenever Ford EcoBoost appears on a Roush Fenway Racing machine — in both the XFINITY Series and Cup Series — it means there is no set sponsor for that weekend. Since 2013, that has been the case for 17 out of 119 contests for Stenhouse’s squad. However, the number of weekends with the manufacturer’s highly promoted on the car declined from six in each of his first two full seasons at the Sprint Cup level to four in 2015.

While Stenhouse finished 25th in the standings last year — two spots better than his mark the year prior — he had an average finish of 24.3, down an average of 1.9 positions.

But 2016 is different for Stenhouse’s Roush Fenway Racing team.

2016 marks a fresh start for the entire organization. It is the driver’s second year working with crew chief Nick Sandler, who had never served as a crew chief until the 2015 Daytona 500 with the No. 17 team.

Within 11 events, Stenhouse has shown signs of improvement. His Roush Fenway Racing teammates, Greg Biffle and Trevor Bayne, have a combined average finish of 20.8. Meanwhile, Stenhouse’s average finish is 18.6, even though he has completed 95.5 percent of laps run this year, the worst of the three drivers.

Suddenly, the 2013 Cup Series Rookie of the Year is now a team leader. It is something that is

new for Stenhouse, who had been accustomed to being the least experienced driver of the team behind Biffle and former teammate Carl Edwards prior to his departure for Joe Gibbs Racing in 2015.

While success might not be imminent for Stenhouse’s No. 17 team, they are getting back into the swing of the things. After Roush’s decline, which started before Edwards’ departure in 2014, the team has since been on the slow trek back to the top.

In 2015, none of the Roush Fenway Racing cars finished higher than 20th in the standings, with Biffle topping the organization’s squad in 20th.

While Bayne has topped the team thus far in the season in terms of improvement — jumping from 29th after 11 events to 20th — Stenhouse leads the team in the standings, average start and finish, along with lead lap finishes at nine. With the added level of success, pressure is coming off his shoulders as he looks to take himself off the hot seat.

“For me, it is being in the shop and giving the teams in our meetings direction on where we need to be and what we need in the racecar to be better every week,” Stenhouse told Frontstretch on Friday during a press conference at Dover. “Walking around the shop and telling all the chassis department and body shop department, just walking around and telling them that I appreciate their hard work and everything that they are doing is starting to pay off.

“But we still have to keep it going in the right direction and that is feedback from myself and my team and Greg [Biffle] and Trevor [Bayne] as well. I feel good about where the [No.] 17 team is and the direction we are going in our racecar each week, and if we can continue down the path that we are going down, it is going to continue to get better.”

Rumors circulated for quite some time last year that Stenhouse could be out of a ride when his contract expires at the completion of the 2016 season. Darrell Wallace, Jr. is on the team’s radar, given that he is competing for the organization in the XFINITY Series. But with Stenhouse and Bayne beginning to make strides to bring Roush Fenway Racing back to being a top-tier team, the organization could be set on its lineup for the immediate future.

Well, that is unless Biffle opts to retire once his contract runs out at the end of the season.

As Stenhouse attempts to carry this team, his future is looking secured. His popularity has grown, especially since he is dating one of motor sports’ biggest starts in Danica Patrick. Out-running his girlfriend on a weekly basis now, the comparison of the two has continued to be compelling.

Stenhouse’s success started early this year, running in the top 10 throughout the day at Atlanta Motor Speedway before settling for a 10th-place result. Come Auto Club Speedway, the No. 17 team broke into the top 5 for the first time in nearly a year, going back to Bristol in April 2015.

With frustrations becoming infrequent, there is another new look to Stenhouse’s team. This time, it isn’t a sponsor, though. Instead, it is one that is much more relaxed.

As Stenhouse walked into the media center at Dover on Friday, he was decorated in the colors of his new sponsor, SunnyD. The bright smile on his face was not just one created by bringing a new sponsor to NASCAR, but also of the hype surrounding his team. It’s a new feeling for him, one that he hasn’t had since his second championship run in 2012.

“It is just not getting frustrated and making sure that I keep my eyes open for what we need in our cars each week so that when I come back to the shop I am not giving false information on what we need,” Stenhouse explained. “That is the biggest thing. We don’t want to go down a path that is not going to get us better each week. That is some of the things that I have tried to really make sure that I focus on and really think through each week before I give them a direction on what I feel we needed from the previous weekend.”

If Biffle departs, Buescher likely will move back to Roush Fenway in the 16 car not Wallace. Wallace’s performance level isn’t there. Buescher isn’t going to remain with Front Row Motorsports.