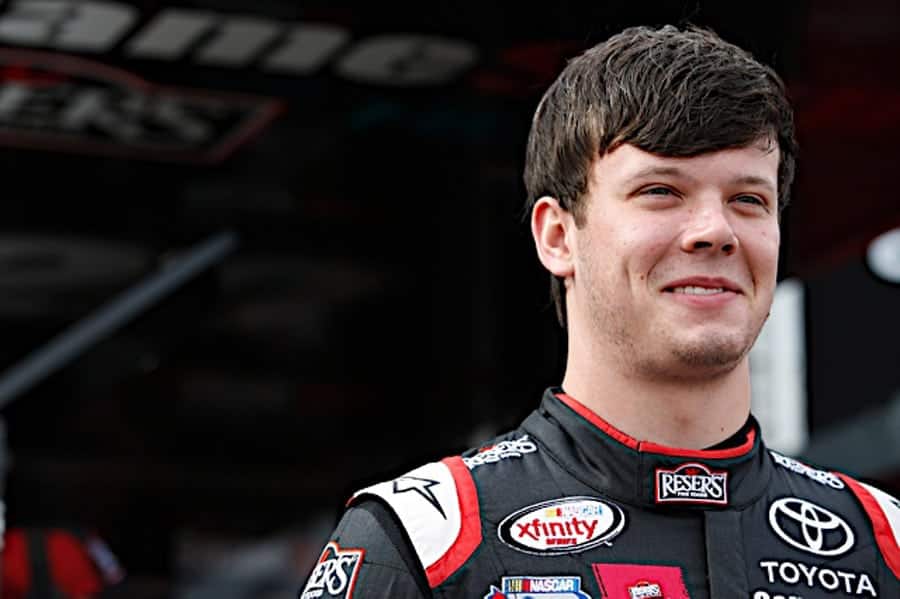 Despite being skeptical about his chances of winning, Erik Jones raced to victory for the second time in 2016.  Jones drove away from the field following a restart with five laps to go and picked up his first XFINITY Series victory at Dover International Speedway in the Ollie’s Bargain Outlet 200.  The win is Jones’ fourth overall in the XFINITY Series and his second Dash 4 Cash win in 2016.

“We’re just way off, I think, on balance,” Jones said after finishing second in his heat.  “So we’ll see what it does for the feature, but we’re going to do what we can to get it good and try to get some speed back in it.”

Jones never appeared to be that far off in the first heat, swapping the lead multiple times with Justin Allgaier during the 40 lap contest.  Although he came up short in the heat, Jones returned to the lead by lap 12 of the main race and stayed there for the next 33 circuits, demonstrating the No. 20 car’s short run speed.

As the race continued, Jones’ biggest challenger proved to be Alex Bowman, who was making his first start for of the season for JR Motorsports.  Bowman took the lead away from Jones on lap 45 and held the top spot until the yellow flag flew on lap 71 for debris on the backstretch.  Jones was the first driver to leave pit road after the leaders made pit stops, and he would hold the lead for the rest of the race.  A second caution with 11 laps to go for Brendan Gaughan’s spin, however, meant that Jones would have to hold off the field once more.

Jones, Allgaier, Joey Logano, and Darrell Wallace Jr. all stayed out, while the rest of the lead lap cars pitted.  After receiving a push from Wallace on the restart, Jones broke away from the pack and sped to victory.  Bowman would climb back to third in the closing laps, but he was unable to catch Jones or Wallace, who finished second.

“I was a little anxious to see how many (cars) really came and how many stayed out,” Jones said after the race. “But fortunately enough (cars) stayed out to make it viable for us to still get the win here.  Thanks to the 6 for the push, Darrell Wallace, that was a big key to getting us back out front, just an awesome day.  (We) had the Reser’s Camry good, and I wasn’t too sure about it after the heat race, but it turned out to be alright.”

Wallace’s second place effort was a career-best finish, capping a weekend in which the No. 6 team was forced to a backup car after a crash in practice.

“You’re welcome for that restart, Erik!” Wallace joked after the race.  “We got a really good start, our Ford Mustang was really hooked up… I was hoping Erik would have messed up, but man, it’s really hard to mess up in those cars.”

Bowman, who will run select events with JR Motorsports through the rest of the year, was the highest-finishing driver on the team.

“Obviously, that first long run we were killing them at the end; I was really excited about that.  I wish it would have just gone green and had green flag stops.

“We put on four tires there at the end, just trying to win the thing instead of settling for second and came up a little bit short,” Bowman continued.  “But I’m just so blessed to be here and so thankful for the opportunity from JRM and Advance Auto Parts.”

Allgaier and Ty Dillon completed the top five, followed by Elliott Sadler, Logano, Matt Tifft, Daniel Suarez, and Brennan Poole.  Sadler took sole possession of the points lead from Suarez by three, but not before the veteran experienced a dose of controversy.  Sadler received a penalty from NASCAR after jumping the start of the second heat race and beating Suarez, the pole sitter, to the starting line.  Sadler contested that Dillon had pushed him past Suarez at the start.  He eventually served his penalty, but was tagged for speeding on pit road in the process.  The escapade relegated Sadler to a 32nd place  starting spot in the main event, but he would fight his way back into the top five before the final caution came out.

Dillon nearly found himself in trouble of his own after charging past Suarez during a late restart in the second heat.  NASCAR reviewed the restart but deemed everything okay, leaving Dillon to claim the win. Before the main race began, there was some panic in the No. 3 camp that the car might not be full of fuel.  It turned out to be a non-issue for Dillon.  He would lead the opening laps of the main race but faded badly over the long run, nearly getting lapped by Bowman before the first caution.  Dillon rallied late in the race for his second top five in the last three races.  He remains third in points.

The rest of Richard Childress Racing had rough days at the Monster Mile.  Gaughan’s late spin relegated him to 15th.  Brandon Jones made contact with Ryan Reed early in the main race and was forced to make a green flag pit stop to fix a tire rub.  He would finish four laps down in 25th.  Paul Menard, meanwhile, had a good race going until he dropped off the pace on lap 82 with what appeared to be a broken shock.  He finished eight laps down in 29th.

Justin Marks did not even get to complete a lap in the main race.  Marks got loose off of turn four during the second heat, smacked the inside wall on the frontstretch, then slid back across the track and slapped the outside concrete wall, totaling the No. 42 car.  Marks was okay after the incident, but the Ganassi team was unable to repair the car, leaving Marks to finish 40th.

JJ Yeley and Blake Koch had the best results of the underdogs, finishing 11th and 12th respectively.  However, it was once again Ryan Sieg who garnered the most attention.  Sieg finished third in his heat and ran as high as third in the main event before fading to finish 16th.

With Menard’s troubles and Matt Dibenedetto only completing four laps, Logano was the lone Sprint Cup regular to finish in the top 10.  It was another quiet day Team Penske’s XFINITY program.

“… In a P2 spot – I wouldn’t have freaking called it!  It’s a good day.  Congrats to my girlfriend Amanda; she graduated today!” – Darrell Wallace Jr. after finishing second

“We had a great heat race.  We made some adjustments there and unfortunately (we were) just a little bit off in the main.  I felt like we were able to maintain a little bit but just unfortunately weren’t able to make the passes that we needed to.” – Justin Allgaier after finishing fourth

“I love these heat races… it’s fun and you can be aggressive and get up there, (and I’ve) been successful in them.  But then it makes our feature nothing.  You don’t have any time to recover. So I would like to add some laps, and maybe we would have had a better finish.” – Ty Dillon on his day and the heat race format

Jones may have wound up in victory lane, but Bowman’s performance was the biggest story coming out of Dover.  One of many young drivers trying to carve out a career in NASCAR, Bowman spent the last two seasons racing for back marker teams in the Cup Series, losing his ride at Tommy Baldwin Racing late in the past offseason.  It looked like Bowman might fade away and be best remembered for losing a battery pack at Bristol two years ago, but racing with JR Motorsports has given him a new opportunity.  Hopefully he will have a much greater presence in the XFINITY Series in the coming months.

As for the race itself, Dover produced the best pair of heat races yet, though perhaps not for the right reasons.  The battle between Jones and Allgaier in the first heat was fun to watch.  The restart drama in the second heat, while compelling, was an unfortunate flashback to last year’s Chase in the Cup Series.  Nobody really wants to see races decided by officials in the control tower, so hopefully the restart issues that have bubbled up this weekend will settle down once NASCAR leaves The Monster Mile.

Dover has struggled in recent years to consistently produce compelling races, but Saturday’s contest had a lot going for it.  With multiple grooves available and teams focusing on either the short or long run, different agendas helped to ease some of the passing difficulties drivers have experienced at Dover lately.

Finally, give credit to the folks at Dover for installing some new SAFER Barriers on the inside of turn three.  Hopefully the frontstretch and backstretch walls will be covered by the fall.

The XFINITY Series will take a weekend off and return on Saturday, May 28th for the Hisense 300 at Charlotte Motor Speedway.  Race coverage begins at 2:30 PM Eastern on FOX Sports 1.