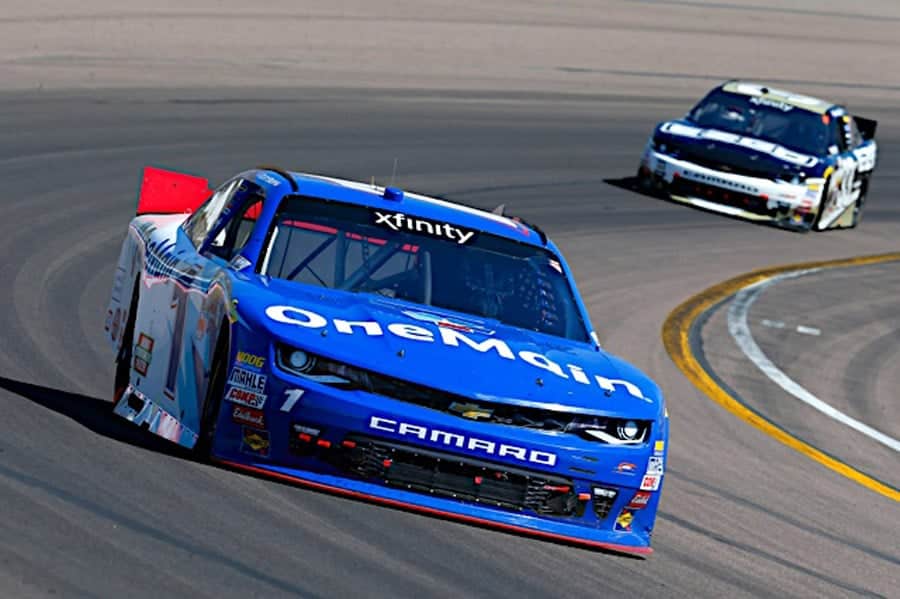 In recent weeks, a stronger sense of parity appears to be emerging in the XFINITY Series.

Thanks to Kyle Busch spending a few weeks away from NASCAR’s second-tier division, some new faces have had the opportunity to reach victory lane.  Erik Jones has notched two wins in the last five races, one of which came at Dover last weekend.  The most compelling storylines, however, have come out of JR Motorsports.  Those stories include Elliott Sadler’s thrilling win at Talladega, team owner Dale Earnhardt Jr.’s first XFINITY victory in nearly six years, and an impressive third place run by Alex Bowman at Dover.

The success of JRM suggests that the edge that Joe Gibbs Racing has enjoyed over its NXS competitors early in the season has started to shrink.  Yet as both teams continue to perform at a high level, is any sign of improvement on JRM’s part really reflected in the numbers?  Or is this a case of Earnhardt Jr.’s team benefitting from not having to deal with Busch each week?

If JR Motorsports really is on the upswing, the team still has work to do on qualifying, one sector of the weekend that JGR has thoroughly dominated.

It is also not true that JR Motorsports is going on a winning spree.  Junior’s team has three wins this year compared to six for JGR.  Moreover, two of JRM’s victories have been at superspeedways, courtesy of Sadler and Chase Elliott at Daytona.  JGR has been even or superior to JRM everywhere else, particularly on the all-important 1.5 mile intermediate tracks, which Busch has swept.

Thinking about JRM with a mentality of  “what have you done for me lately” makes for a better case for the team’s improvement.

JRM has won two of the last three races.  Earnhardt Jr. demolished the competition at Richmond, leading 128 of 149 laps in the main event on his way to victory.  The following week at Talladega, Sadler and Allgaier finished 1-2 for JRM.  Neither driver was a dominant force in that race, but Sadler in particular spent most of the afternoon in the lead draft, within sight of first place.  Dover was another good race for JRM, highlighted by Bowman leading 33 laps in his first start of the year, Allgaier winning his heat race, and Sadler marching through the field in the main event after getting penalized in his heat.  Also, Sadler took sole possession of the points lead from Suarez at Dover.

What JR Motorsports has done in the last few weeks, however, is not remarkably different than what they have done all year.  The game plan for Junior’s team has essentially been to stay out of trouble and rack up top ten finishes as much as possible, which is what Sadler and Allgaier have done quite well this year.

Sadler currently has nine top ten finishes, tied with Suarez for the most among all drivers this season.  Outside of his Talladega victory, there is not a lot to suggest that he has run better in the last five races than he has in the first five.  Two of his four top fives have come in the last five races, and his only finish outside the top ten was four races ago at Bristol.  His average finish in the most recent five races (6.4) is only slightly better than his average finish in the first five (6.8).  Moreover, his single lap led at Talladega is the only lap he has led since Daytona.

The best-performing team at JRM this year is actually the No. 88, which has been split between Elliott, Earnhardt, Jr., Bowman, and Kevin Harvick.  Through ten starts, that car has picked up two wins and no finish worse than 12th.

While it makes sense that the car that usually features Sprint Cup drivers would perform the best, having a high level of consistency with a revolving door of drivers is still highly impressive.  Having Bowman step into the car and immediately run what was arguably his best-ever XFINITY race is particularly outstanding.

If JRM really has stepped up its game, then the biggest indicators are Earnhardt Jr.’s overwhelming win and Bowman’s quick success.  Yet the two JRM drivers who will likely compete for the championship, Sadler and Allgaier, are doing what they have done all season.  Sadler’s win and Allgaier’s strong heat race performances have garnered extra attention for the team, but both still have work to do in order to match JGR step for step, especially whenever Busch comes back.

For the rest of the regular season, the key to JR Motorsports’ success will be finding speed on race day.  Sadler and Allgaier have both proven in their NXS careers that they do not necessarily need to lead lots of laps in order to reach victory lane.  Winning NASCAR championships, however, usually comes down to finding the right balance of speed and consistency.  JRM has consistency down pat, so speed is the next step.