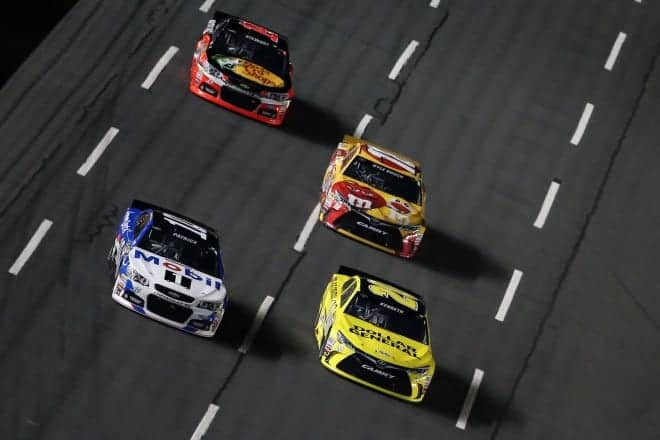 Dover is a track that over the past few years has failed to inspire fans to pay attention the the Cup races.  Part of this reasoning may be that Jimmie Johnson has run away with a number of the events.  Another aspect is that the cars seem to do little in the way of on-track competing, with the strung out parade coming coming about just a few laps after the green flag falls.

These snooze-inducing Dozer, er, Dover, races belied the track’s nickname, of being the Monster Mile and did not match with its history of being a demanding track, both on the driver and the equipment.  But all of that seemed to change this past weekend.

Perhaps the aerodynamic alterations to the cars brought the change.  Maybe Goodyear brought the right tire compound for the race.  Maybe having Jimmie Johnson not in the lead, or watching Kevin Harvick fall back due to bad pit stops made things more interesting.  Heck, perhaps the Sun was retrograde in Venus or something.  Regardless, the Cup race at Dover looked like one of the better ones in years.

Which brings us to the All-Star race this weekend.  Let’s ignore the fact that these drivers, for the most part, all race each other every weekend, so it’s not like there’s suddenly some new faces, or that Aric Almirola will get voted to drive Kyle Busch’s car.  No, the All-Star race once seemed to have some drama to it but in many ways it has become a glorified test session for many teams.  That the race is held on a 1.5 mile track where aero-dependency is so important, it’s no wonder that the drivers aren’t beating on one another.

Enter the rule changes meant to heighten the sense of excitement for the race.  Two segments of however many laps.  Then those are followed a pseudo-lottery that mandates that a bunch of drivers must come in for pit stops while the rest of the field can decide to remain on track.  In essence the field gets split between cars with fresh tires and those without.  Then everyone gets set to run for 13 laps, not 12 or 14 but the peculiar number of 13, which was probably decided after analyzing tire fall-off, or someone just picked the number out of a hat.

The changes for this year are meant to make things more entertaining, and in many ways, NASCAR  recognized that something needed to be done with the farce that has become the All-Star race.  But barring Jimmie Johnson jamming his transmission, the question is: Will it work?

Happiness Is…Rumors. Our own Tom Bowles made news this week by mentioning the possibility that Hendrick Motorsports had offered Kevin Harvick the seat currently held by Kasey Kahne.  There is a lot to back such a rumor, such as Kahne’s underwhelming performance over the past couple seasons and the fact that Harvick is a longtime Chevrolet supporter and his current team will be switching to Ford next year.

Harvick stated at the beginning of the season, when the same idea circulated through the garage, that there was no way he was leaving Stewart-Haas.  He doth protested very much once again after Bowles put forth the rumor, which, really, isn’t so surprising as he’s in the middle of a championship battle and shouldn’t want to deflate his team.

But what if these persistent rumors hold truth to them?  If so, then the Cup series might finally see a Silly Season that is worth following for a change.  It’s not like many of the recent ones have had much in the way of drama.  Carl Edwards going to Joe Gibbs Racing?  Yawn.  Matt Kenseth before him?  Whatever.  But Harvick moving shakes things up; Kahne out of a ride; Ryan Newman, still competent likely out at Richard Childress Racing; Greg Biffle on the hot seat.  Yes yes yes.  Things could get rather interesting .

Happiness Is…The Unheralded.  Has anyone noticed that AJ Allmendinger is currently sitting 16th in points which would put him in the vaunted Chase?  Or that rookie Ryan Blaney is sitting just ahead of him?  Maybe slightly more improbable is the fact that Jamie McMurray, he who seems to rarely catch a break, is in 14th?  Some guy named Dale Earnhardt Jr. is in 13th but that’s not really important, though Austin Dillon in front of him is surprising.

The sum total of things here is that there are some surprising names holding down spots in the top 16 right now, and really, that feels like a good thing.  Can McMurray really compete with the likes of Johnson, Harvick, or Kyle Busch?  Not really – but then again, Jeff Gordon couldn’t really run with those guys either and yet somehow made it to the Championship race.  So right now there’s a reason for cautious optimism in the fact that things might get shaken up a bit as things progress this season.

Happiness Is…Pole Day.  The 100th running of the Indianapolis 500 is nearly upon us and this weekend will set the field for the race’s historic running.  Though the teams lost a day of practice this week due to rain, the emphasis and the track time are crucial for this event.  Much like the Daytona 500 encourages to bring their absolute best machine to the race, so does the Indy 500 – and it’s no surprise with the purse that’s part of the event.

There used to be a bump day, when the cars on the back of the grid fought for the remaining positions but that aspect diminished in importance and ultimately failed to continue.  No matter.  The competition for the pole this year will be fierce and the importance is not lost on any of the parties involved.  Sure, it’s likely that a Ganassi or Penske driver will claim the top spot but that shouldn’t make things any less interesting.  Enjoy – especially considering that this race is the longest lasting of its kind.