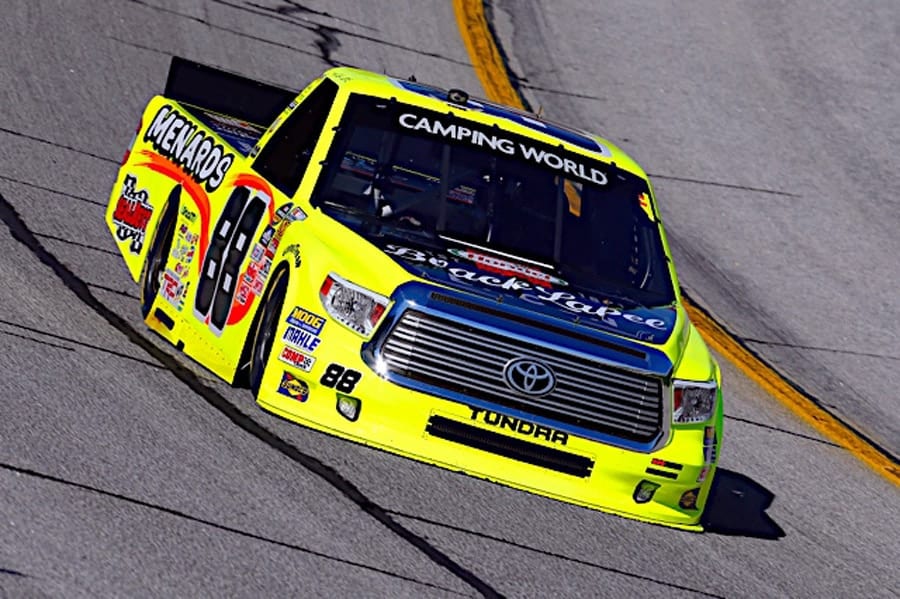 After taking the lead just past the halfway mark of the NC Education Lottery 200, 2014 Camping World Truck Series champion Matt Crafton never looked in the mirror at Charlotte Motor Speedway.

Leading 47 laps on the afternoon, most of all competitors, Crafton picked up back-to-back victories for the first time in his career. Much like Dover last weekend, once the No. 88 truck got out front it was hard to catch him as at one point he had an eight second lead on second-place.

Even during the midst of green flag pit stops within the final 10 laps of the race, the series veteran was able to get back around drivers that went the final stint of the race on the same tank of fuel.

“The crazy part about it is that we didn’t make a lot of changes,” Crafton said of his team after struggling in practice on Thursday. “We had a list of probably 20 different things and I think [Carl] Joines changed 15 different things. I knew we were off at Dover in practice, but this was the worst we had been in a long time during practice and they wholesaled this thing. From Lap 1 on it was game time.”

This is Crafton’s second triumph in NASCAR’s hub, as he picked up his first career victory at Charlotte back in 2008.

Six-time Charlotte winner, Kyle Busch came home second in his second race of the 2016 season. On a Lap 69 pit stop, the No. 18 team had to go to the rear after having an uncontrolled tire penalty. Throughout the last part of the race, he was able to drive through the field without any cautions.

“Once we got back in traffic it got super tight like it was laying on the splitter,” Busch said. “This is a fourth team deal. We’ve got some work to do on this one to get it a lot better where we need to be.”

Daytona winner, Johnny Sauter had a car capable of running in the back half of the top 10 on Saturday afternoon before he went the entire second half of the race without pitting for fuel. The No. 21 truck has two consecutive finishes in the top five.

Getting his first top-five finish of 2016, Tyler Reddick also went all the way to the finish on gas, as well as Matt Tifft who rounded out the top five.

Right after the first caution of the day on Lap 23, Daniel Hemric passed Busch for the lead and led 15 laps, which he said was a “confidence boost” to the team. The Brad Keselowski Racing team finished the day in ninth.

Starting from pole, rookie driver William Byron dominated until the first stop, leading the opening 25 laps. With a bad pit stop on pit road, The No. 9 team was never able to get track position and raced around fifth until the green flag pit stops to end the race. He rounded out the top 10.

After running in the top five for the majority of the race, rookie Rico Abreu had a pit road penalty on his last pit stop. This was his third consecutive finish of 20th or worse.

Having three weeks consecutively of racing, the Truck Series now takes three weeks off before heading to the Lone Star State for a 400 kilometer event at Texas Motor Speedway.