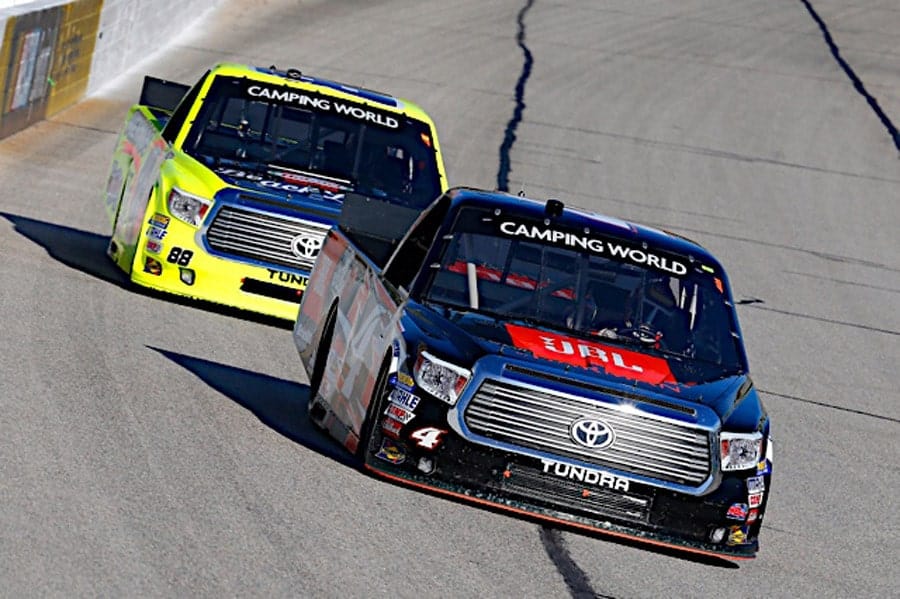 In a Nutshell: Matt Crafton overcame an early pit road issue to win the North Carolina Education Lottery 200 by 5.748 seconds over Kyle Busch.  It’s Crafton’s second win of 2016, the 13th of his career and second in a row after his Dover victory last weekend. Johnny Sauter finished third, stretching fuel to make the end but having to run too slowly to maintain the lead, but he had better luck with his fuel gamble than Daniel Suarez, who wasn’t able to stretch to the end and wound up 23rd after a penalty coming to pit road in the closing laps. Tyler Reddick finished fourth and Matt Tifft fifth for a career best.

Who Should Have Won: Matt Crafton. Crafton had a dominant truck in the second half of the race, surging through the field with ease. The veteran staked an early claim as the driver to beat for this year’s title as well, becoming the first driver to win multiple races in 2016.

Different winners Crafton became the first driver to win more than one race through six events. Johnny Sauter (Daytona), John Hunter Nemechek (Atlanta), Kyle Busch (Martinsville), and William Byron (Kansas) also have visited Victory Lane this year, with Busch the lone non-regular to date with a win. The winners are a healthy mix of young drivers and veterans (more on that in a minute), stars of the series and stars in the making.  With a Chase field of just eight, drivers aren’t safe with a single victory, so unlike in the Sprint Cup ranks, they can’t afford to win one early and then test for the playoffs.  They’ll have to fight for those trophies all season long.

Penalties galore Teams were racking up the penalties on Saturday, with men over the wall too soon on pit road being the biggest gotcha with eight total infractions for that rule alone, and five of those coming on the same lap of the race. All in all, 13 teams were penalized a total of 21 times for violations ranging from missing the drivers’ meeting to speeding and other safety issues. The No. 63 team of Bobby Pierce was the biggest offender, with a total of four penalties, two for speeding and two for men over the wall too soon.  Kyle Busch was tagged for a tire violation while leading and wasn’t able to get back to the front before the laps ran out.  If teams don’t curb them, those penalties could be also prove costly later in the season as an elimination-style Chase invades the series for the first time, and a pit penalty at the wrong time could result in championship heartbreak.  Speed in the pits matters, but accuracy matters even more.

Veterans and young guns Saturday’s race featured a mix of drivers in the hunt for the victory.  The young guns kicked it off with rookie William Byron capturing the pole based on a speedy Thursday practice.  Rookie Rico Abreu also led a lap early on as well.  Later in the race the veterans had a chance to shine, with Crafton and Timothy Peters putting on a clinic racing for the lead just past halfway.  The mix of talented youngsters and wily veterans in one of the things that makes the Truck Series one of NASCAR’s most entertaining groups, and it also means that there’s something for everyone.  The young drivers get the benefit of racing with the best the series has to offer in relatively equal equipment, and a Cup driver in the race doesn’t mean the win’s a foregone conclusion.

A surprising first Crafton has won back-to-back titles in the Truck Series, but back-to-back races? Saturday was the first time the driver has visited Victory Lane two weeks in a row.  Crafton, who was a bit of a late bloomer in his career, has become the driver to beat in the series recently, winning two of the last three championships and extending his 2016 points lead with his win at Charlotte.

*  Saturday’s race saw 14 lead changes among nine drivers.  Just three cautions slowed the action (one for caution clock expiration), and the race lasted just under an hour and a half.  Coupled with a lot of on-track action due to Friday’s rain delays, it was just right—fans were certainly not cheated out of any good racing between the Trucks and the Sprint Showdown, but they won’t be burned out on it before the main event if they had tickets for both events.  Fans were treated to a solid day of racing at Charlotte.

* The series gains momentum after a slow start to the season due to a schedule that saw just three races through the end of April.  They’re off next week while the XFINITY Series takes its turn in support of the Sprint Cup Series at Charlotte, but return in two weeks for a Friday night showdown in Texas. While having all three national touring series start the season at Daytona makes sense on paper, it’s not

No. of rookies in the race: 10: All six ROTY candidates were in the field, along with Austin Wayne Self, Andy Seuss, Bobby Pierce and Ryan Truex. In addition, Jesse Little failed to make the field after qualifying was rained out.

No. of rookies to finish in the top 10: Three—Matt Tifft (5th), Christopher Bell (8th) and William Byron (polesitter; finished 10th)

Points Update: with his won, Crafton extends his points lead to 12 over Timothy Peters. Daniel Hemric sits just five markers behind Peters, with Spencer Gallagher another five behind him and William Byron another four behind Gallagher.  Ryan Truex, John Hunter Nemechek, Tyler Reddick, Christopher Bell and Johnny Sauter complete the top 10, with Sauter separated from Crafton by 41.

“The crazy part about it, we didn’t make a whole lot of changes. They made all the changes last night – two nights ago Junior (Carl Joyner, crew chief) and I went to dinner and sat until 11:00 and thought of a ton of things. We had a list of about 20 or so things and I think he changed 15 or more things. We got about halfway through the changes yesterday that he was telling me that he did and I was like, ‘I’m good, I don’t need to know anything else you did to it.’ We were honestly, I knew we were off at Dover in practice, but this was the worst we’ve been in a long time during practice and they wholesaled this thing and from lap one on I knew it was game time. The first one I slid through the box and just had a goofy pit box there and had another one, but this Menards Toyota Tundra was right there at the end.”-Matt Crafton, race winner

“I don’t know, something happened when we got back in traffic and I got super, super tight like it was laying on the splitter or something. I don’t know if something came out of place on the frontend or what. Just proud of the effort – this is a fourth team deal and it’s not an A-plus deal. We have some work to do on this one to get it a lot better for where we need to be. Thanks to SiriusXM Satellite Radio and Toyota and all the guys at KBM (Kyle Busch Motorsports) that built this thing. It’s one of our newer pieces. It was okay, but once I think we had a part failure it wasn’t very good at all so we have to go back and do our homework.”-Kyle Busch, finished second

“We really struggled all day. We have a little bit of damage on the first lap, but we were just way too tight all day. When you have those situations and you’re in the back like that, you have to play the strategy piece. Scott Zipadelli (crew chief) did an awesome job with that, obviously bringing home my first top-five in the Truck Series. We weren’t going to come down and I said, screw it, let’s come down and let’s get some fuel. It really worked to our favor there and sometimes when you’re in the back like that you have choices you can make. Really cool having NASCAR Heat Evolution on the truck, it’s awesome what they’re doing for the sport with video games. Red Horse Racing has worked hard this whole year and the funny thing is that we’ve had really, really fast trucks and we didn’t get the finishes we wanted. Today may be the opposite, but we’ll take top-fives as they come.”-Matt Tifft, Rookie of the Race, finished fifth

“We started first and we were able to get a pretty good lead there early in the race. We just had a couple strategy things work out the way they did and restarts weren’t my strong suit, starting on the bottom. I’m just going to have to look back at those and see what I can do when I’m starting fifth or so like that. The track was really slick, which made it fun and fun to pass – you were able to move around, but at the same time it was harder to pass because you were sliding around so much. Now we’ll move on to Texas.”- rookie William Byron,polesitter, finished 10th

“I felt like I really let my guys down on that last green flag stop. I was so focused on not sliding my tires with 25 (laps) to go and then stopped too late in our box and my nose was out.”-Rico Abreu, finished 20th, on the mistake that cost him a top finish

Up Next: The Trucks next take to the track on Friday, June 10 at Texas Motor Speedway. That race will be broadcast on FOX Sports 1 at 9:00 PM Eastern time and radio coverage will be on Sirius XM channel 90 and MRN Radio.