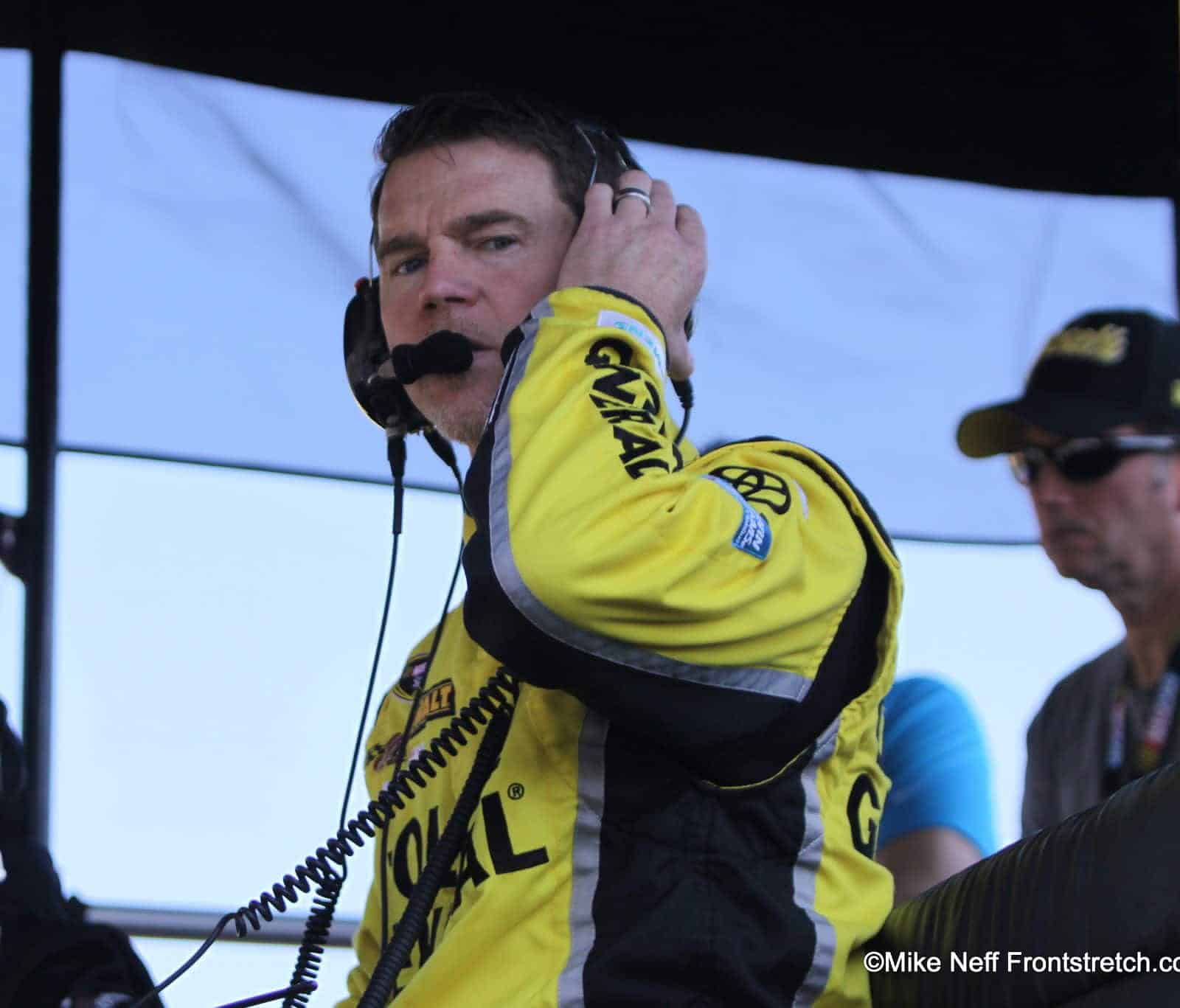 Jason Ratcliff guided the No. 20 Dollar General team for Joe Gibbs Racing, driven by Matt Kenseth, to their first win of the season at Dover International Speedway two weeks ago. Last weekend he tried to utilize pit strategy to help his team overcome a poor qualifying position in the All-Star Race, but it backfired. He now prepares for NASCAR’s longest event with the same tires and some of the aero changes that were implemented for the All-Star Race.

This week in Tech Talk, Ratcliff discusses what he was trying to do during the first segment of the All-Star Race and his opinion of the new format. He also looks at tire wear for this weekend’s Coca-Cola 600, car reaction to temperature change from day to night at Charlotte and the advantages other teams have looking at the underside of cars when they get upside down.

Mike Neff – Overall, from the aero package and the racing itself, what did you think about the All-Star Race?

Jason Ratcliff – The aero package, I’m sure it is fine. The format, I would clean the chalkboard off and start over. You have to try something. If you continue to do the same thing you did yesterday you’ll get the same result. I don’t think it was a negative putting the effort out to do something different. I think they had the right idea, just maybe need to think out how it could potentially play out through a lot of different scenarios. It just didn’t work out.

Neff – At the end of the first segment, is it a safe assumption that you were trying to run it as long as you could, take two tires and then only have to take two tires and be at the front of the pack with the freshest tires for segment two?

Neff – Tires seemed to drop off pretty significantly. Were there any issues with tire wear, or were the tires solid and just gave up a lot?

Ratcliff – The wear was fine; nothing to be concerned about. We ran almost 50 laps on a set. Everything looked fine; they just fall off, lose grip and slow down. That is fine; that is what a lot of people have been asking for. It should be an exciting race. When the caution comes out I don’t think any competitors will be questioning whether they need to come get tires or not. It will make that decision easy.

Neff – At the Coca-Cola 600, you run from the daytime into the night. Is the softer tire going to be even more of a handicap during the day with the sun beating down on the track?

Ratcliff – We’ll know more about that coming up this weekend. We didn’t get a lot of practice with it this past weekend. I would venture to say that it is. It looks like the temperatures are going to get up into the mid 80s or so. Once the track heats up it will hold that heat for a little bit. Transitioning could be tough. You’re going to have to manage the best you can until things cool down. You’ll see where you are and adjust accordingly.

Qualifying, as always, is important. Starting as close as you can to the front will buy you a little bit of insurance on that transition time to make sure that you can approach it in a sensible way. You don’t have to do anything crazy early on and fight with it later in the race. It is a tough one for sure any time we transition, especially at a track like Charlotte, which I think is one of the most temperature sensitive tracks we race at. It makes for an exciting race, and we definitely earn our money.

Neff – Historically, when tracks cooled down at night, they would usually tighten up. Charlotte has seemed to actually loosen up in recent years as it turns to night. When you ran Saturday night with these tires, did it get tighter or looser as you went through the run?

Ratcliff – We seemed to get a little bit freer as we went through the run. Things were different though. We had a different rear housing/toe rule. How much that will change things, we won’t really know until we get onto the track and get some laps under our belt. For the most part, in the All-Star Race, our car tended to go toward the free side as the night went on.

Neff – On the crew side of things, they focused on it during the No. 42 stop between the final segments, but a lot of guys had similar situations during that last stop when they didn’t need a lot of fuel. During the week, does your pit crew run through scenarios like that, where the gas man helps with pulling tires or does something else during the stop, when he only has to put one can of fuel into the car?

Ratcliff – Occasionally, if we feel like there is a possibility. Especially in the All-Star Race you can do that. You have a really good idea of how many laps you’re going to run. In a 600-mile race, it can play out a lot of different ways. If you get some long green runs that is not an option. If you get a short run, if you’re going to take four tires but you don’t need a lot of fuel. You have a lot of different options in the playbook that you can use to try and help pit stop times.

Neff – Most everyone seemed to have the left-side skirts flared out on their cars Saturday night. NASCAR had come down and said that wasn’t allowed at one point in time. Was it allowed  because it was the All-Star Race, was it something with the new rules or was it an optical illusion from TV?

Ratcliff – When you hit the racetrack, especially a track as rough as Charlotte, when you travel down and the skirt bottoms out, it is just going to bend it. If you’re looking for something that will improve aerodynamics, it doesn’t hurt. That is why you saw everyone in the race like that. It is something across the series, at a track like Charlotte that is so bumpy, if you can get the left-side skirt to do that you might find a little bit of an advantage there.

Neff – Another aspect of the new rules they were trying out was limiting the number of fans and where they could blow. Have you been trying, or seen other teams trying, to have cooling fans not exactly doing what they’re intended to do but actually trying to void air out from under the car rather than being used for cooling?

Ratcliff – That has been going on for a while. That is one of the rules that was implemented for the All-Star Race, getting rid of any fans that were not definitely, without a shadow of a doubt, being used to cool breaks or tires. They eliminated that and introduced some new wording into the rule book to help clean that up. You can find some aero gains with different fans under the nose and the back of the car. It is something the teams have been doing for a period of time. Ever since the All-Star Race the other night I don’t think we’ll be seeing any more of that going on.

Neff – Another rule utilized last Saturday was welded mounts for the truck arm. In reality those have not been utilized on a production vehicle in something like 40 years. Have you heard of any discussion from NASCAR about switching over to more of an independent rear suspension and getting away from truck arms? It is kind of like carburetors; it took years to get away from those too.

Ratcliff – I have not heard that. If that is being talked about it is news to me. Once you have something that works you stick with it. It works with the solid rear-end housing and the 9-inch gears. Everyone has made such a huge investment, and it works from a vehicle dynamics standpoint. It works pretty good. You could definitely come out with something better, but it isn’t terrible, so why change it?

Neff – The No. 20 got upside down at Talladega. They briefly mentioned it in the broadcast, but it seems like all of the other teams want to screen-capture the broadcast and analyze what that team is doing under their car. Did you get any feedback or grief from any of the other teams about what you were doing under your car that they weren’t doing?

Ratcliff – No. I’m sure there are plenty of photos out there (laughs). I haven’t heard anything. You’re right, any time you can get a bird’s-eye view of something you don’t normally see, any competitor in his right mind is going to take a look at it. No, I haven’t heard anything, but I don’t expect that I will. If they see something that is different or worth applying to their car I’m sure I won’t hear about it.