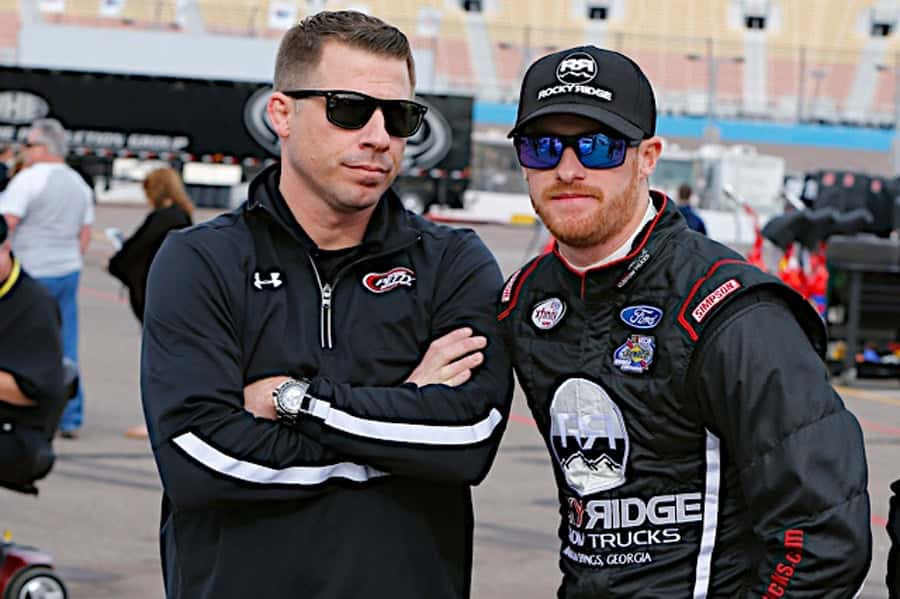 With a week to spare before the season-opening XFINITY Series race at Daytona International Speedway in February, Jeb Burton grabbed a new opportunity with Richard Petty Motorsports, driving their No. 43 Ford.

Making his first start in the series since 2014, Burton ran on consistency from the drop of the season-opening flag, finishing outside the top 20 only twice in the opening 11 rounds of the season. The best run of the year came at Atlanta when Burton came home 10th.

Unfortunately for the 23-year-old, RPM announced Wednesday that the No. 43 XFINITY operations will be suspended following sponsorship issues. The announcement came four days following a tenacious drive at Charlotte Motor Speedway, where Burton drove from the rear of the field, battling in the top 10 before settling for 11th.

The punch in the chest to Burton’s full-time racing career was far from the first bump in the road for the Virginia native. However, Burton has collected healthy experience in all three NASCAR national series over the past three years, starting in the Camping World Trucks where he won at Texas in 2013, before grabbing a full-time Sprint Cup Series ride last year for BK Racing.

Finishing a career-best 27th at his home track of Martinsville, Burton was unable to secure a ride for the 2016 season. Though his XFINITY program is put on hold, Burton found a new opportunity in the shadow, as he will race in Sunday’s Axalta “We Paint Winners” 400  at Pocono Raceway for Go FAS Racing’s No. 32 Ford.

Frontstretch sat down with Jeb Burton at Charlotte Motor Speedway preceding the Hisense 300 to talk about his thoughts on the No. 43 ride, his favorite Sprint Cup moments and his passion for hunting.

Zach Catanzareti, Frontstretch.com: It’s NASCAR home here in Charlotte. What are your feelings when it comes to racing at a place like this?

Jeb Burton: I like being here. The shop is right here, all the crews. We got family and everything right here so it’s a pretty big deal to come here and put on a good show in front of your team. And everybody on the team has their family here and a lot of people in the shop so it’s really cool to be here.

Catanzareti: You’ve raced here in all three series, how does this No. 43 car compare to a Cup car or a Truck here?

Burton: It’s kind of similar to a Cup car. You’re in the throttle a lot because they don’t have as much horsepower. It’s similar but its definitely different. I honestly feel like that we have a really good car and we’ll go find out in a minute.

Catanzareti: You’ve had a unique transition over the last few years. Started in Trucks, then you went to Cup and now you’re in XFINITY. How has your mindset changed over the last couple years?

Burton: Well, it’s been really frustrating. I’ve been having sponsorship issues. A lot of those changes I haven’t been in control of, so it’s been frustrating. I’m trying to make the best out of my situation right here at Richard Petty Motorsports, I’m glad to be here and hopefully I’m doing that.

Catanzareti: When it comes to experiences, you got into a JR Motorsports truck last year. Getting into such a big ride, what was that experience for you?

Burton: For sure. Getting into anything fast is good. Just like this ride I’m in now. Trying to make the best out of it. Being in good equipment is always good, you just have to do a good job behind the wheel.

Catanzareti: Working with Dale Jr., what was that help like for you?

Burton: It was cool having the spotlight and everything. Hopefully – we had a pretty good run in that truck, I got in the wall a little bit in the race and it hurt us a little. We had a pretty decent showing.

Catanzareti: How much do you feed off that Sprint Cup experience that you have? When it comes to racing in a series like this, how much does that really help you?

Burton: I think it helps a lot with the tracks, just knowing what you need. I ran a lot of laps last year in Sprint Cup. Definitely got a lot of time on the tracks and I think it’s helped me some.

Catanzareti: What was your favorite moment in a Cup car last year?

Catanzareti: Do you want to get back in the Cup Series or are you really set on getting a strong ride in here in XFINITY or in the Trucks?

Burton: Yeah, I would rather be in a very competitive ride in any of the series. Being in a low-budget car sometimes isn’t that fun. That’s part of it sometimes. Sometimes you have to do things you don’t want to do. My career has been real bumpy, just trying to figure it all out.

Catanzareti: Explain the struggles. You’ve haven’t gotten it easy while a lot of these guys come up and get it easy. You’re doing it the hard way.

Catanzareti: Explain this car, does it suit your driving style? Do you like the looser-type racecar or are you more of a right racer?

Burton: I’d much rather have a tight racecar. You can hustle it more and you can just drive it hard.

Catanzareti: You have a lot of top 20s in this car, you got a top 10. Were those your expectations coming in or have you surprised yourself?

Burton: I was hoping we would be a little bit better. Just a couple spots better a week would mean a lot. I feel like we got a really good car for today so hopefully we can go get a top 10.

Catanzareti: What do you think you need to be a little higher on the charts?

Burton: I just think it’s technology. Running with those power houses, they got a lot of technology. It’s just part of it. We have to get better back at the shops.

Catanzareti: You’ve been working with Richard Petty this year. When it comes to other car owners you’ve worked with, how does he stack up against the others?

Burton: Richard is a great guy, a really good leader. It’s been a lot of fun working with him and being around the Petty organization and their families, so I’ve been really lucky to be here.

Catanzareti: Speaking of car owners, unfortunately, Steve Turner passed away earlier this month. What did he mean to your career?

Burton: He probably made my career, running there. I got seven poles and a win in one season with Turner. We had a good relationship and he’ll be missed.

Catanzareti: Your first Truck win came in that time, you had your dad there, you were crying in Victory Lane. Explain the emotions of that day.

Burton: Yeah that was a great day. Probably one of the best days of my racing career. Hopefully we can go do that again soon. It was real emotional to have the whole family there.

Catanzareti: Do you feel that any time you go back to Texas?

Burton: Yeah, for sure. I’ve had a lot of success there, a pole, a win. So hopefully I can go back and get the pistols one day.

Catanzareti: We have [uncle] Jeff Burton in the NBC booth now. Has that given you any ideas when it comes to broadcasting some day for you?

Burton: I don’t know if that’s going to be for me. That’s kind of Jeff’s deal. Jeff does a good job at it. I think I’m going to stick to the driving part.

Catanzareti: Do you see yourself having a long-term future with this RPM team?

Burton: I hope so. Everybody at the Petty organization has welcomed me with open arms and I really enjoy being there. Hopefully I can go do a good job for them on the racetrack.

Catanzareti: Hunting is a huge passion for you. How have you been able to mix hunting and racing ever since you were a little kid?

Burton: I’m a big outdoorsman. I try to do that when I’m away from the racetrack and have some fun. That’s just who I am and I love racing and I love the outdoors so that’s what I do for fun.

Catanzareti: You did a piece with NASCAR Illustrated on hunting. Was that fun for you to get that out there?

Burton: Yeah, that was cool to show everybody who I am and everything. That was a really neat piece they did.

He got his cup ride because of who his dad and uncle are, that’s it. Now he doesn’t have a ride with Richard any more due to sponsorship issues. He has ONE win in the truck series 3 years ago, that’s it. He needs to gain experience in the truck and xfinity series before he can hope to have any chance in cup.

So we’ll see if he runs it better than Jeffrey Earnhardt who has been 37th at best I think.

He did really well in the truck series, then had sponsor issues, was doing okay in xfinity, again sponsorship issues. Cup series was difficult. At only 23 he is doing well. Just needs a good reliable sponsor & some good luck.