Angelle Sampey won her first Pro Stock Motorcycle race in nine years and was emotional about the win and what it meant to her. Most would say this reaction is understandable, in addition to Sampey being an emotional person to start. Then there are those few who call her out on social media for her tears, calling her whiney. It was, to be fair, just a handful, and not the vast majority who posted congratulations, but the tone of those few is disappointing.

First, yes, she’s female and we females tend to be much more visible in our emotions, including crying when happy. It’s not only women who cry when they are happy though. I’m looking at you, Jamie McMurray. I’m also looking at many of the winners of the Indy 500, and a handful of Daytona 500 or Sprint Cup Series champions. It’s not only female drivers although I will concede it’s a bit more likely from a female. So what?

So maybe Dale Earnhardt wouldn’t approve, maybe he’d toss a line out there like “There’s no crying in racing, you candy ass.” So what? If that’s your basis for not liking a driver, or more specifically not liking female drivers, that’s pretty sad.

Maybe you don’t like Sampey because you think she’s a mean and nasty person. She told me once that the ridicule over her tears caused her to swing in the opposite direction, toward anger and bitchiness. I can understand how that could happen, because my reaction to those comments was anger as well.

When you can pull up to the line and run a drag bike at 6.876 seconds at nearly 200 mph, when you can run a Pro Stock car at 6.6 seconds at over 200 mph, or when you can run a Nitro car of any kind under 4 seconds at speeds in the neighborhood of 320 mph, then maybe your opinion of how those drivers celebrate a win might count for something. I’d argue that no one who does any of those things is a candy ass, whether they cry when they hoist the trophy or not.

In the meantime, female drivers, and their emotions, don’t seem to be going anywhere. If anything, I suspect we will see more and more of them in years to come, following the example of drivers like Sampey who are showing them girls can do anything. I suggest you get used to tears on the victory stage. 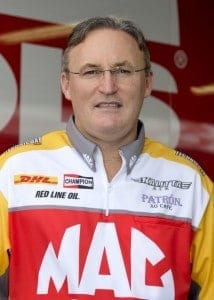 2014 – Two wins in nine final round appearances; six time No. 1 qualifier; made Countdown for the seventh consecutive year.

2006 – Led points for the last 10 races of the season before finishing second; scored five wins in five final round appearances; two time No. 1 qualifier.

Some things most people don’t know about Doug: Doug also has a day job as president of Kalitta Charters. He loves to fly and earned his Learjet license at age 21. We all know Doug can drive really fast in a straight line, but he’s pretty good at turning too as he was the USAC national Sprint Car champion in 1994.

Three time champion Pro Stock Motorcycle rider Angelle Sampey got her first win in the class since 2007. Sampey retired from riding after the 2008 season but returned in 2014.

Word of the Week: Pre-staged

Consider this lesson one in learning how to read the Christmas Tree. Starting at the top of the tree, the very first light you see is the pre-staged light. This is either a small yellow light or the top half of a blue circle. Once lit, it indicates that a driver has moved up to about seven inches behind the starting line, the first part of getting the car staged for a race.