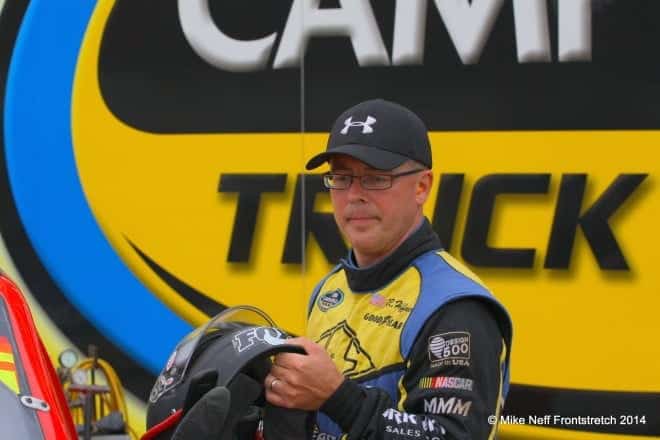 On Saturday night, Frontstretch learned that JR Heffner, a regular racer at Lebanon Valley Speedway and Albany-Saratoga Speedway out of Averill Park, New York, will return to the Camping World Truck Series for the Aspen Dental 150 at Eldora Speedway in July. Similar to his last appearance in the series in 2014, Heffner is partnering with a full-time team to make the trip.

This time, Heffner is partnering with Martins Motorsports, a small operation that, according to Tommy Joe Martins‘ own article on Thursday, has three full-time employees, including himself. Martins will step aside for the weekend, allowing Heffner to compete in the No. 44 truck, with his own chassis.

Heffner’s chassis, acquired at auction from the former MRD Motorsports and formerly driven by Dennis Setzer and Chad McCumbee, has attempted all three of the previous Mudsummer Classics at Eldora. In 2013, driving the No. 44 for himself, Heffner qualified eighth quickest, but couldn’t transfer out of his heat race. In the LCQ, he lost fourth gear at the start and ended up with an ignominious DNQ.

2014 saw Heffner partner with MB Motorsports, using the team’s No. 63 (and by extension, their owners points). There, Heffner started 16th and finished 18th despite having to serve a drive-through penalty for jumping a restart.

Last year, Heffner was planning on returning to the Ohio dirt track as of April, but he chose to skip the race because attempting Eldora stretches his local campaigns thin. At the time, he felt he wasn’t running well enough to take time away from his Lebanon Valley exploits.

However, he did allow MB Motorsports use of his chassis.  Bobby Pierce took Heffner’s truck and won the pole with it at Eldora last year. He then led 39 laps in the race and finished second, showing the chassis’ true capability. The truck may have truly looked secondhand after the race, but it still got the job done.