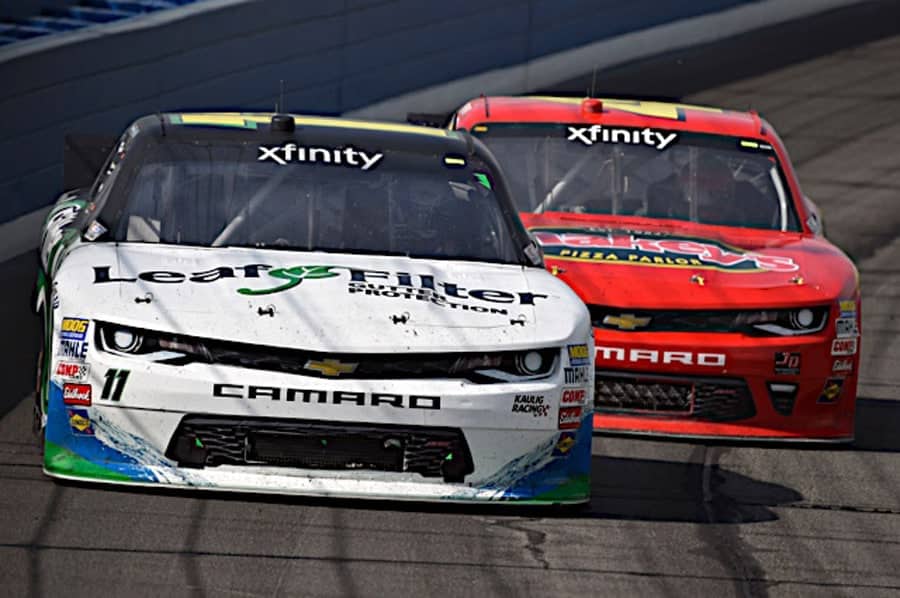 The NASCAR XFINITY Series season is well under way, and while the Sprint Cup drivers continue to dominate NASCAR’s version of Triple-A, there are some folks who are making a name for themselves.

Obviously, the top-tier teams will continue to be the ones that perform the best, especially given they have the funding to compete with drivers such as Kyle Busch and Brad Keselowski when they drop down to the XFINITY Series. However, there are also the underdogs, the folks who do so much with so little.

The underdogs are the feel-good story in every sport.

Look at the New York Mets last year. Who thought that the Metropolitans would be in the playoffs, let alone the World Series?

The same happens in NASCAR, but very seldom due to the economics of the sport. Ideally, the strongest teams are the ones that generate the most sponsorship dollars. However, there are always a few exceptions.

Q: Blake Koch and Ross Chastain seem to run rather well for the equipment they are in. Who else stands out in the XFINITY Series? – Jill R., Redding, Penn.

A: These two drivers are having quite strong years. Interviewing both of them, I can say that each are also some of the nicest gentlemen you will ever meet, not only in NASCAR, but in life.

Ross Chastain continuously looks back on his time with Brad Keselowski Racing as his first major chance in NASCAR, and rightfully so. He had previous opportunities with SS Green Light Racing and other small teams, but none as large as BKR.

Chastain is quite the talented driver. One can compare him to Landon Cassill, a former teammate of Chastain’s at JD Motorsports. Cassill has gone several years being labeled as one of the sport’s most underrated drivers, competing for small teams, largely without major funding. The same can now be said about Chastain.

After 14 races, Chastain sits 13th in the standings, two positions higher than he was at this point last year. While the top 10s are not present, the consistency is. He has five finishes outside of the top 20, compared to seven through 14 races in 2015. His average finish of 19.4 is a slight improvement from last year’s 20.3.

The success of the No. 4 team has led to Chastain gaining a new sponsor. Dream Water joined the team at Charlotte, evidently increasing its sponsorship for multiple races after pit strategy saw the kid known as the watermelon guy competing in the top 5 for several laps.

Meanwhile, Blake Koch is riding on Cloud 9, just like the line in the Katy Perry song. The newly formed Kaulig Racing is working quite closely with Richard Childress Racing, and is certainly making the most of the alliance.

Koch has earned two top 10s through 14 races this year. Think about this: In 147 prior XFINITY Series events, he never earned a top-10 finish.

Making the most of the latest opportunity, Koch continues to praise crew chief Chris Rice, who helped spearhead the team’s efforts before they even had any cars. At this rate, Koch will be Chase eligible. Ideally, he would like to tally up his first top 5. However, he wants to continue to prove he can finish in the top 10, showcasing his ability to be consistent for the first time in his career.

But besides Koch and Chastain, other drivers who don’t have much funding are standing out in the XFINITY Series.

Ryan Sieg, who is embarking on his third full season on the circuit after nearly four full-time years in the Camping World Truck Series, continues to circle around in his family-owned black and red No. 39 car.

The struggle for Sieg’s team is well-known, especially when he comes to the track without a primary sponsor. However, after finishing 11th in the standings last year, he has welcomed 10 new primary sponsors to his team, one of the most in the XFINITY Series. Utilizing local businesses near racetracks, the marketing strategy is working well.

Another family-owned effort is the No. 51 team of Jeremy Clements, who earned his first top 5 earlier this year at Talladega. Walking around the XFINITY Series garage, his hauler is by far the most noticeable, with vertical curtains welcoming one into the truck. Yeah, it’s like you are walking into a hauler at your local short track.

But Clements maintains quite the effort for his small team, which employs just a handful of people. This year, he has experienced some tough luck, featuring either pit road errors, mechanical issues or in the case of Pocono, being in the wrong place at the wrong time.

Also, let’s not forget to mention a few folks that are still learning, attempting to compete for top 20s when they usually run on scuffs (old tires). This list includes Ryan Preece, Garrett Smithley, the JGL cars, along with TriStar Motorsports.

Q: I heard a rumor that Jeff Gordon could become Kelly Ripa’s new co-host. What would that do for NASCAR? – Michael C., New York City.

A: As Donald Trump would say, it would be “yuge.” However, like previous host Michael Strahan, people will likely not tune in just because of his stardom.

But that doesn’t matter. Putting Jeff Gordon on the national spotlight would be gigantic for NASCAR. It’s something the sport has been missing since he retired, given he would co-host the show every now and then, bringing more attention to NASCAR.

Hosting a daytime talk show is something that is suitable for Gordon. He has the personality to do so, and is also quite knowledgeable. Additionally, he has an apartment in Manhattan, so it does make sense for him logistically.

The only problem with Gordon hosting Live! would be whether or not his contract with FOX has a clause that does not enable him to work for another network since the show is produced by ABC. However, since he is not doing sports work, there should not be a problem. For reference, Strahan worked for FOX as an NFL pre-game analyst while doing Live!

While Gordon may not be chosen to be Kelly Ripa’s co-host, he is on her list of replacements for Strahan, who departed for Good Morning America. Ripa was displeased with the lack of knowledge about her counterpart’s departure, leaving the show for multiple days before an awkward return, when it was made known that Strahan would leave the show several weeks earlier than originally planned.

Having Gordon as a co-host would elevate his stardom, which is quite difficult to do given how popular he already is. He’s known throughout the world, just like Strahan, and has the potential to welcome a new audience to NASCAR, helping replace some of the fans who won’t watch NASCAR religiously anymore because of his retirement.