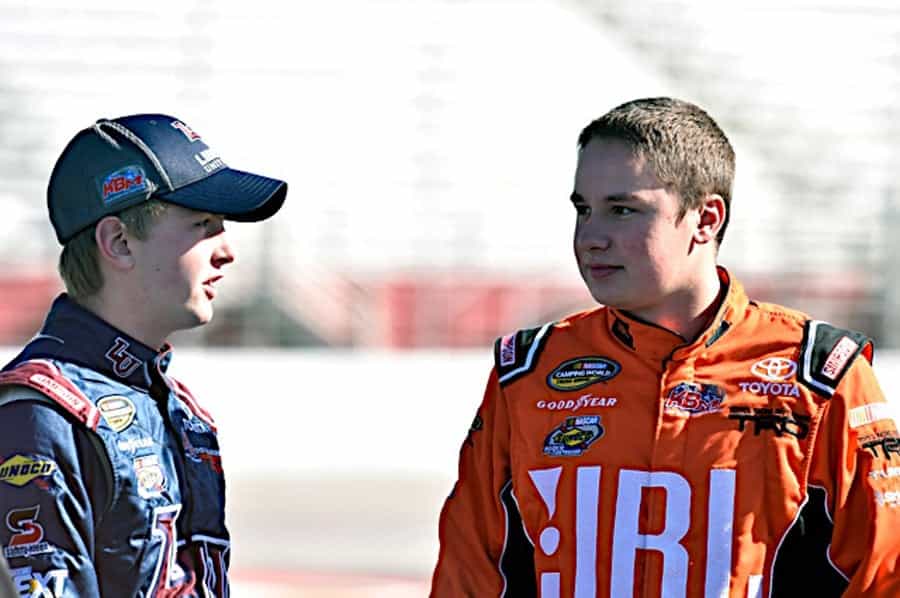 In a Nutshell: Christopher Bell worked his way to the front after final stops and survived a melee in the closing laps to take the Drivin’ for Linemen 200 at Gateway Motorsports Park. Bell held off a hard-charging Ben Rhodes to punch his way into the Chase.

Bell was forced to make a major save after being pushed up the track on an earlier restart, and had to withstand multiple challenges from Rhodes, Tyler Reddick and others to take the victory. Rhodes ultimately ended the day in second, with Daniel Hemric, Johnny Sauter and Erik Jones completing the top 5.

Who Should Have Won: John Hunter Nemechek proved to have one of the strongest trucks in the field throughout the late stages of the race, working his way around William Byron and closing the gap to Bell from a second back to challenge for the lead throughout the final 30 laps. However, Nemechek struggled with dirty air and couldn’t complete the pass before a caution flag fell. The two-time winner was then involved in a late-race accident with Tyler Reddick before finishing in sixth.

Entering Saturday’s race as a replacement for Cody Coughlin, who chose to compete in CRA late models, where he leads the championship standings, Erik Jones was considered a favorite among the NASCAR paddock.

Starting 17th after qualifying was rained out, Jones had worked his way up into the top 10 in his No. 51 JEGS Toyota when he lost control of his machine on lap 26, sliding up into Cameron Hayley and sending both trucks spinning.

Jones fell a lap down as his team repaired damage from the crash, and immediately found himself entrenched in a struggle to salvage a decent finish.

Luckily for the Michigan native, a mid-race free pass and some attrition allowed Jones to rally to a top-10 result.

It admittedly wasn’t the result that Jones wanted coming into the weekend, but his grind to a solid finish was reminiscent of his championship victory in 2015. If he can take that same level of fight and apply it to his XFINITY Series drive, he just may hoist another championship trophy this November.

Passing proved difficult for the NCWTS at Gateway, so when they got a chance to make passes, especially on restarts, the field took them.

Unfortunately, that led to a massive crash late in the race.

Coming off of a restart with just 12 laps remaining in Saturday’s Drivin’ for Linemen 200, John Hunter Nemechek was running for the lead when a shove from behind sent him sliding up the track and into leader Christopher Bell.

Seizing the opportunity, Tyler Reddick shot under both drivers to shoot for the lead, but another shove sent him sliding toward Nemechek and into the outside wall.

What resulted from there was a substantial crash, one that sent Reddick and Matt Crafton to the garage area, and forced a red flag for cleanup.

While both drivers are supremely talented, John Wes Townley and Spencer Gallagher are rarely the top names coming out of a NASCAR weekend. Yet they were the only ones being discussed after a wild Saturday in Gateway. Why?

It all started when Townley crashed late. Things escalated further when Townley took Gallagher out, and ultimately the two young talents ended up trading blows on the lower edge of the racing surface as the rest of the field paused for a red flag.

Both drivers are certain to see penalties from the crash – especially Townley, who went so far as to pull out a WWE move and DDT Gallagher into the racing surface – the cringeworthy fight and subsequent social media outbreak could likely serve as punishment enough.

It remains to be seen if either driver will be allowed to race in two weeks at Kentucky Speedway.

“This win here will make mine and Jerry’s (Baxter, crew chief) lives a way better going throughout the rest of the year. I think we’ve both kind of been stressed, been on the nerve switch for the past few weeks because we’ve been fast, but we just haven’t been able to capitalize.” Christopher Bell, finished first

“I’m really proud of all of our guys, for all the hard work they’ve done in light of the recent circumstances at ThorSport Racing. They’ve been working out of a Kroger parking lot, and they’ve been working their butts off all week. I’ve seen it day-in and day-out.” Ben Rhodes, finished second

Up Next: The Camping World Truck Series heads to Kentucky Speedway on July 7. The Kentucky 225 will be broadcast live on Fox Sports 1 at 8:30 p.m. ET and can also be heard on your local MRN affiliate or SiriusXM channel 90.