NASCAR announced a few changes to qualifying, including using owner points instead of practice speeds to determine the lineup if qualifying is rained out and giving a provisional spot to an open team during the Chase if that team makes the playoffs.  Was this the right move at midseason, or should NASCAR have waited until 2017 to change things up?

Clayton Caldwell, Contributor: The timing of it all is interesting considering that it was announced a week before Daytona International Speedway, a track where you may see a non-charter team like Wood Brothers Racing win it. Other than that team in particular, the rule change doesn’t really affect anyone. Is it possible that Cole Whitt, whose team is leasing its charter to the No. 46 team of Michael Annett, could pull off a win at Daytona? Sure, but highly unlikely, and same with the other teams in that boat.

Mark Howell, Senior Writer: NASCAR should have waited until next year to implement these kinds of changes. The ever-evolving aero rules are enough to contend with right now. Save some confusion for next season.

Amy Henderson, Senior Editor: I like the Chase provisional rule.  If a team makes the Chase, it deserves the same chance as every other team in it.  I don’t love the change back to using owner points to set the lineup if there has been a practice session available to everyone; it made performance that week count for something.  That one, if it needed to be made, should have gone into effect in 2017 rather than midseason; midseason changes should be limited to things that are more urgent.

Phil Allaway, Newsletter Editor: Provisional spot if a non-Charter team makes the Chase is a no-brainer; can’t have top guys failing to qualify for Chase races because they weren’t full-time at the beginning of 2013.  However, I don’t understand the ditching of practice speeds to determine starting grids in case of rainouts.  Why would you kill that, and only in Cup?  That’s a stupid move; what we had was working just fine.  As for doing it midseason, I’m fine with it.  It’s not that big of a change.

Dale Earnhardt, Jr. is currently 12th in points, 28 above the Chase cutoff line.  Without a win in 2016, does Earnhardt need to win at Daytona, and if he doesn’t get one, is it time to hit the panic button?

Howell: The panic button for Dale Earnhardt, Jr. was pressed about a month ago. He can’t hope to make the Chase on points with such inconsistent finishes. He has to win, and he has to win soon. But winning this week at Daytona won’t be an easy accomplishment; the young guns are ready to steal some thunder.

Bryan Gable, Staff Writer: Earnhardt does not need to win anywhere.  His performance this year has been up and down, but there are not 16 better driver/team combinations than the No. 88 right now.  The biggest priority for Earnhardt should be building that points cushion over the Chase cutoff.  Daytona would be a good place for him to win, but he will have a shot at several other tracks, particularly Pocono Raceway and Michigan International Speedway.  No need to panic yet.

Henderson: I don’t think he needs to win, but he does need to be more consistent.  The current Chase format rewards mediocrity in the regular season, and there are teams more mediocre than the No. 88 in the top 16.  If there are actually 16 winners and Earnhardt isn’t one of them, he’s out of luck, but he’s more likely to make the Chase than not as things stand right now.  And really, a driver missing the Chase will not spell the end of the sport as we know it.

Allaway: I really don’t think he needs to win, but it never hurts to do so.  Earnhardt has been quite strong at times this year.  However, the No. 88 is not very consistent; four second-place finishes were offset by four wrecks.  Fix that and it won’t be a question whether or not Earnhardt can qualify for the Chase.  If he doesn’t win Saturday night, it’s not panic time unless something really bad happens.  There’s no reason that he can’t make the Chase right now.

NASCAR announced that there will be no aerodynamic changes to Sprint Cup cars for this week’s race at Daytona.  Was that a good call, or should something have been in the works after a couple of wild restrictor plate races this spring?

Gable: It was really only Talladega that had an inordinate number of airborne cars.  In that case, the drivers were on edge, racing the arrival of rain that ultimately did not cut the race short.  Let’s see what happens this week before we make any changes.

Henderson: I agree with Bryan that the worst incidents were at Talladega, but that doesn’t mean they couldn’t happen at Daytona.  NASCAR had long enough since Talladega that they could have worked on a solution.  I’d like to see some changes for 2017, because the Daytona 500 wasn’t very good until the ending.  It was too hard to make a charge from the back, and lines stalled out too much instead of moving forward.  Unless this week’s race is significantly better, a few changes should be in the works.  Remember Dale Earnhardt coming from 18th to the front in like three laps at Talladega?  They need to be able to do that again.

Allaway: NASCAR probably didn’t need to make any aerodynamic changes to the cars.  I don’t necessarily expect the most competitive races this weekend; July races in Daytona tend to be the least competitive of the plate races.  NASCAR needs to make changes to how the end of these races are officiated, though.  Throwing the yellow in the last 800 feet of both the Cup and XFINITY races at Talladega was outright stupid.  Yes, there was wreckin, but what are you going to do? Throwing the yellow doesn’t make it any safer than if you let everyone run to the line; the same stuff would happen regardless.  Brennan Poole should be a winner, but instead, he left Talladega with a third-place finish.  Not throwing that yellow makes life so much easier for the officials.

Caldwell: I think no aerodynamic changes for this weekend is a bad move. These last few plate races have been lackluster, and it always seems like the bottom lane sputters out leaving limited opportunities to pass. I do like the fact that track position plays a role, because it hampers the drivers who decide to sit in the back and not race for the first 100 laps, but I would like to see the bottom lane not be such a detriment. I think there is work to be done on the plate program moving forward.

After their fight during the race at Gateway Saturday night, should John Wes Townley and Spencer Gallagher have faced NASCAR’s penalties, or should the incident be written off as a show of emotion?  Also, should officials attempt to break up driver scuffles or let them play out?

Henderson: I thought the penalties were fair, but NASCAR really needs to decide on a firm stance on fighting. It seems to drop the hammer on the little guys, but not so much on the big names.  A fight is a fight, and while Saturday’s was admittedly entertaining (John Wes Townley appeared to go for Spencer Gallagher’s hair to kick it off, and it didn’t get much more dangerous), there needs to be a consistent penalty for any driver who engages another, regardless of other circumstances.  I actually didn’t have a problem with the officials letting them work it out themselves until punches were thrown.  At that point, they should have made a better attempt to separate the pair before someone got hurt, but overall, the handling of it was OK if NASCAR will now use this as the standard going forward any time two drivers scuffle.

Allaway: NASCAR is cognizant of how their fans accept changes and rulings.  I feel like there would have been an uproar had Townley, Gallagher or both been suspended.  The fines are fairly stiff by the standards of the Camping World Truck Series; Townley’s $15,000 is the equivalent of a P4 penalty, while Gallagher’s is at the high end of a P3.  I assume that part of that is the “approaching the racing surface” penalty, which is stupid.  They needed to be punished, but NASCAR didn’t want to make it too serious.  It seems the sport likes the attention, no matter how ridiculous, and wants to see this again.  I don’t, because it’s stupid.  The fight reminded me of the J.C. France-Chris Bingham fracas in Mexico City a few years ago — similar circumstances and similar tactics from the officials.  Is it right? Not really, but it does keep the officials from getting hurt.

Caldwell: I think there should have been a penalty for both drivers, but I don’t think it should stiffer than it was. I am on board with taking your anger out on the person you’re mad at and doing in outside the car instead of inside the car. I’d much rather have that than someone intentionally wreck another driver at 200 mph or take a swing at their car on pit road. There’s nothing wrong with a good old fashion sprawl every now and again, but you can’t have a wrestling match every week either.  As far as the officials go, they should do what they feel is in their best interests. I know I wouldn’t want to get punched breaking up a fight, but if the opportunity comes to separate the two drivers in a safe manner, that action should be taken.

Howell: I’m of the mind to let drivers have at it. The fights are more clumsy than competitive when coming at the end of a race. Officials should stay close, but try not to squelch the emotions. In short track law, that often results in more fighting by the haulers.

Gable: I like that NASCAR issued fines and left the punishment at that.  On one hand, it is not good if fights become a central aspect of the show.  Racing is a lot more enjoyable than wrecking or driver to driver shoving matches.  However, NASCAR needs to keep emotion as part of its brand.  It is not permissible for analysts to come rushing in with righteous indignation and declare scuffles like this one embarrassing to the sport.  NASCAR was popularized by the rebellious spirit of moonshine runners conducting their business on the wrong side of the law.  Aggression and rebellion are at the roots of this sport.  There is no need to suspend drivers for fighting or have officials hurrying to break up an altercation.  But NASCAR should remind the combatants that settling the score should not overshadow the racing.  This time, NASCAR got it right. 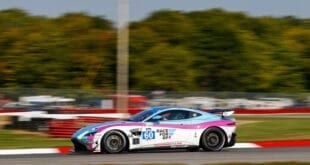