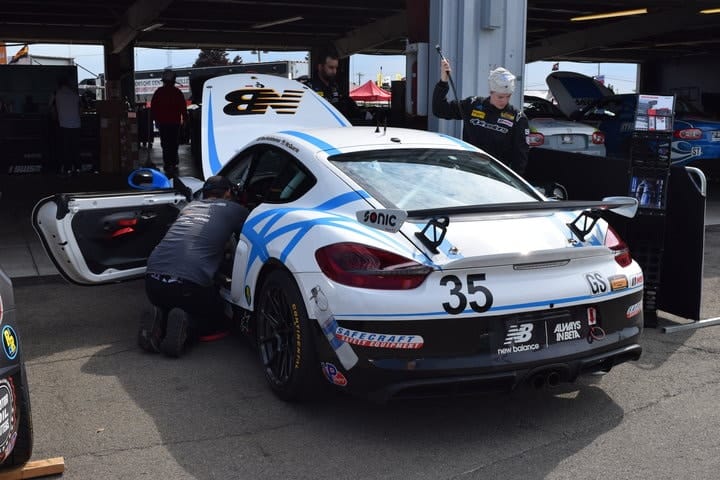 On Friday morning, speeds picked up as the 36 IMSA Continental Tire SportsCar Challenge teams took to Watkins Glen International for their second and final 45-minute session.  At the end of the session, it was the same type of car on top of the charts, but from a different operation.

Afterwards, McQuarrie was very happy with his GT4 Clubsport after changes.

“The No. 35 Safecraft/New Balance car is awesome,” McQuarrie said in his the CJ Wilson Racing hauler after practice.  “We made some changes from [Thursday], when we thought we were pretty good.  It’s going to be a good race car.  Till [Bechtolsheimer]’s pretty comfortable in the car, this being his first time at Watkins Glen.  We’re pretty excited for him to go out and qualify.”

Teammate Marc Miller was second fastest in the No. 33 Porsche Cayman GT4 Clubsport to complete a 1-2 for CJ Wilson Racing.  Miller also credited changes made after Thursday’s first practice.

“[Yesterday], we had some balance issues.  The car felt nervous,” Miller said.  “When a driver has a car they describe as nervous, there’s not a lot of confidence there.   To get the balance back in the car, we made a bunch of changes overnight and immediately, the car was better.”

Multimatic Motorsports‘ Scott Maxwell was third fastest in the No. 15 Ford Shelby GT350R-C, followed by Pierre Kleinubing of Compass360 Racing and Charles Espenlaub in Automatic Racing‘s No. 09 Aston Martin Vantage.

In ST, it was again Rennsport One‘s Spencer Pumpelly who was quickest with a lap of 2:05.951 (97.181 mph) in his Porsche Cayman.  That lap was four-tenths of a second faster than Eric Foss in the No. 56 Murillo Racing Porsche Cayman.  Freedom Autosport‘s Chad McCumbee was third quickest in his No. 25 ModSpace-sponsored Mazda MX-5.  Owen Trinkler in CRG-I Do Borrow‘s Nissan Altima Coupe and Ryan Eversley in HART‘s Honda Civic Si rounded out the top 5.

Qualifying for Saturday’s Continental Tire 150 at the Glen is scheduled to begin with Street Tuner teams at 1:25 p.m. and run for 15 minutes.  After a 15 minute break, the Grand Sport teams will qualify at 1:55.