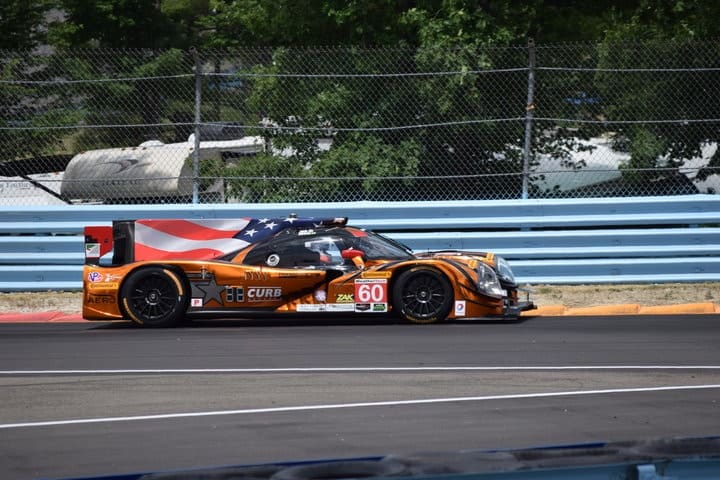 For the IMSA WeatherTech SportsCar Championship teams, the brand-new pavement on the 3.4-mile road course was not that much of a mystery.  Many of the teams participated in an open test just a couple of weeks ago, but that was under somewhat more controlled conditions.  However, even with the new pavement, not a whole lot has changed.

Michael Shank Racing‘s Oswaldo Negri, Jr. turned in the fastest lap of the session with a lap of 96.705 seconds (126.570 mph) to top the overall charts in the No. 60 Ligier JS P2-Honda.  That lap was about a second and a half faster than last year’s best practice lap and nearly four-tenths of a second faster than Max Angelelli in the Konica Minolta-sponsored No. 10 Chevrolet Corvette DP for Wayne Taylor Racing.  The two Action Express Racing Chevrolet Corvette DP’s were third and fourth.  Dane Cameron turned the fastest lap of the two in the No. 31 Whelen-sponsored entry, while Christian Fittipaldi was fourth in the No. 5.  Johannes van Overbeek rounded out the top 5 in the Tequila Patron ESM Ligier JS P2-Honda.

Prototype Challenge saw a number of drivers trade the top spot during the session.  First, it was Matt McMurry in the Gas Monkey Garage-sponsored No. 20 from BAR1 Motorsports.  Then, it was briefly Starworks Motorsport‘s Mark Kvamme and JDC/Miller MotorSports‘ Stephen Simpson on top.

However, once the dust cleared, it was CORE autosport‘s Colin Braun who was the fastest of all, turning in a lap of 98.701 seconds (124.011 mph) to top the charts of the spec prototype division.  The time was ultimately good enough for seventh overall, in front of four Prototypes.

Braun was nearly a full second faster than PR1/Mathiasen Motorsports‘ Tom Kimber-Smith in second.  Simpson was third quickest, followed by Kvamme and Johnny Mowlem in the No. 20 that McMurry paced the class in early on.

GT Le Mans saw a number of teams right up there in the hunt.  Five of the ten cars in the class were on top of the charts during the session.

At the end of the hour-long session, Dirk Werner, sporting throwback patriotic colors on his No. 25 BMW, was fastest with a lap of 103.574 seconds (118.176 mph).  This lap was only one-thousandth of a second faster than Dirk Müller in the No. 66 Ford GT for Ford Chip Ganassi Racing.  Müller’s teammate Richard Westbrook in the No. 67 Ford was a little more than an eighth of a second slower in third.  Giancarlo Fisichella was fourth quickest in the Risi Competizione Ferrari 488 GTE, just three-eighths of a second back of Werner.  John Edwards in the second BMW Team RLL BMW M6 GTLM was fifth in class.

In GT Daytona, the Audis were on top of the charts for most of the session.  Andy Lally in Magnus Racing‘s Audi paced the field early on before Jens Klingmann went to the top in the No. 96 BMW M6 GT3 for Turner Motorsport.

Just past the halfway point of the session, Robin Liddell turned a lap in 106.147 seconds (115.312 mph) to take over the class lead.  That time held up to top the charts for the session.  The lap was over a half-second faster than Jörg Bergmeister in the Park Place Motorsports Porsche 911 GT3-R in second.  Jeff Segal in the Scuderia Corsa Ferrari 488 GT3 was third fastest, followed by Spencer Pumpelly in the Change Racing Lamborghini Huracan and Klingmann.

There were no incidents in the session.  However, there were two short red flags during the session thrown due to debris.