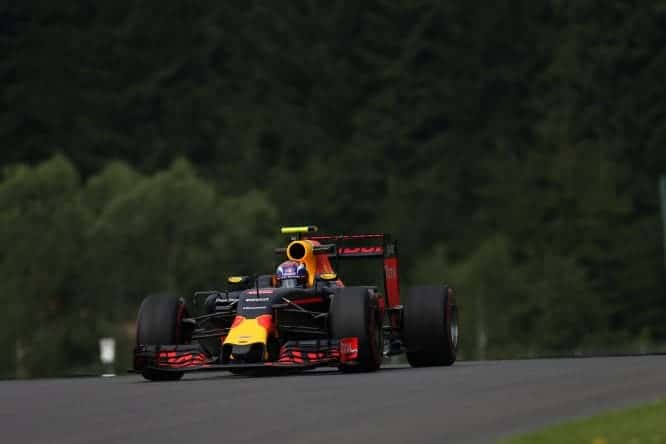 The last Formula 1 race, the first on the Baku Street Circuit in Azerbaijan, highlighted one of the problems with the current rules governing the sport.  Now, it’s rather easy to find faults with a litany of rules that oversee everything from the car to the pits to the helmets.  That the drivers are prohibited from switching the design of their helmets at will is perhaps one of the more silly in motorsports.  The rule that came into focus at the European Grand Prix was the one that pertaining to communication between the pits and the driver.

The rule states that a driver must drive the car alone and unaided.  That seems simple enough.  More logically, it’s not like there’s anyone else in the car, so of course the driver is driving alone and unaided.  Getting away from the semantical argument, however, the goal is to lessen the communication from the pits that would aid the driver in essentially letting the pits coach for every lap.

But in its current configuration, is this rule really helping to make the best racing possible?

When Lewis Hamilton struggled at the last race because the engine mapping settings had been put into a wrong mode, he could gain no real insight from his engineers.  He pleaded with them to tell him what to do, to which they responded that they were unable to tell him what to do.  Thus, for about half of the race, Hamilton toiled about on track, holding his position, before he dismissed the problem and then proceeded to post the fastest lap up until that point.  You can argue as to whether or not he may have finished higher had the issue been resolved earlier but really, it shouldn’t have mattered.

The communication rule is supposed to put the car under the driver’s control and not that of the pits but these cars are so technologically advanced that there’s probably a team of IT personnel just to get it fired.  Sure, it may not be that bad but where there’s a team of engineers at the track coupled with another group of engineers at the team’s headquarters poring over data then it seems like there’s a vast amount of information and perhaps some of it should be shared – especially if it’s just an engine setting.

To go back, it wasn’t so long ago that the cars had launch settings and traction control and, in many ways, the cars were driven by the onboard technology.  The goal has been to put an emphasis on the drivers and their importance in piloting the cars and this rule is meant to do so.

That being said, to create a situation where less communication between means that drivers flounder on the track because the driver is not Alfonse from IT is problematic.  It prevents drivers from actually driving the cars.  And more importantly, it fails to provide the fans with the best racing they could possible see.

This rule is one that needs to be examined in the offseason.  Offering an engine mapping change is not the same as detailing how to drive every corner, or when to lift, or a host of other things that would put the driving back in the engineer’s hand.  But for now, the series is stuck on, “Sorry, we can’t help you with that.”

– The site of this week’s race, the Red Bull Ring, is all shiny and new.  It’s been repaved and given a little makeover for its close-up.  The one problem that has surfaced is that the track installed curbs in may of the corners that are roughly 2” high.  The reason for their installation is that they’re meant to discourage drivers from putting all four wheels off the track in some of the fast, sweeping turns.  This track is notorious for that aspect and stewards are often called upon to assess penalties regarding such matter.  That being noted, Max Verstappen pushed the limits of his Red Bull and nailed these yellow plastic curbs more than once, finally snapping the suspension of his car during practice.  These curbs and how they influence the race are likely something to watch for during the race.

– The track may look beautiful but many drivers have already struggled on the RBR.  See: Hamilton, Lewis; Vettel, Sebastian; Raikkonen, Kimi; Ricciardo, Daniel; and the list goes on.  Whether the racing surface is the issue or not it watching these drivers flail during their practice runs is rather wild and indicates just how on edge the cars and their performance is.

– Ferrari used their engine tokens to upgrade the engines for Vettel and Raikkonen ahead of the race.  While that may not be of much concern, Vettel will incur a five-spot grid penalty for having his gearbox replaced ahead of the race.  With the pace that Mercedes has shown, as usual, that means that Vettel will likely start only as high as seventh and likely lower.  Just to cap Vettel’s day, he spun into the gravel to close out free practice two.

– There seems to be a consensus that Raikkonen will not be at Ferrari next year.  The hot name to take his place has been Sergio Perez but Carlos Sainz also appears to have a shot at the seat.  Rumors indicate that Perez may have already signed on with Force India for next year.  Then again, there also seems to be a sense that Red Bull Toro Rosso has locked up Sainz through 2017.  These rumors would be the very reason why silly season has its name.

– The series has changed how they will test tyre pressures going forward.  It seems that some teams had, allegedly begun using heated hubs and brakes to influence the tyre pressures.  That’s to say that the tyres were affixed to the hot parts, thus increasing their pressures, then out on track everything would cool and drop the pressures, giving the teams what they desired.   Tyre pressures will now be measured with the tyres under the heated blankets rather than on the cars.

The Austrian Grand Prix has been one of those off and on again event, it actually returns for its second straight year, though it should be mentioned that there was a gap after 2003.  the track, now known as the Red Bull Ring is difficult because of its sweeping turns and elevation changes.  The relatively short track, a little over two-and-a-half miles in length (2.68), features nine turns but continued high speeds.  Since the series returned to the track, Nico Rosberg has won both races and also leads all active drivers with those two wins.

Thanks for that. Brain fog. Now corrected. Enjoy your holiday.