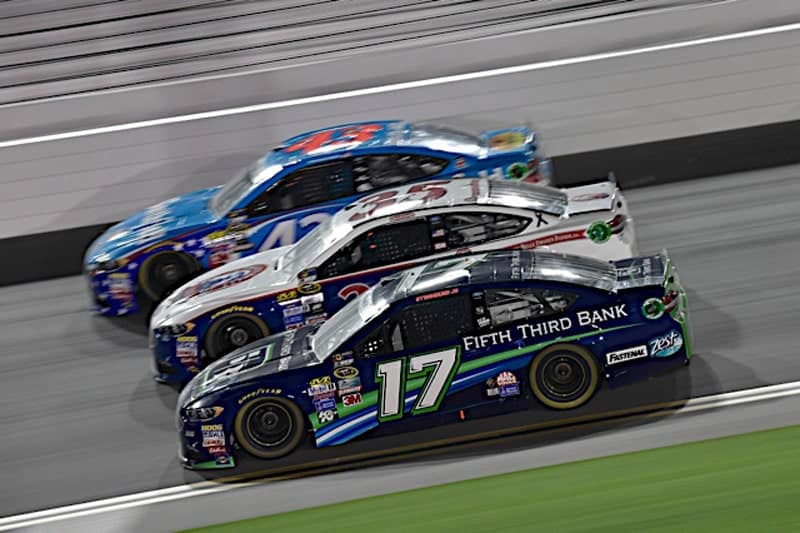 Brad Keselowski finally earning a coveted victory at Daytona International Speedway may be the lasting story to come out of the Ford camp this week. However, the manufacturer also added a bit of icing to their cake for the night thanks to a vintage performance from Roush Fenway Racing.

Coming in the midst of a resurgent season, RFR started their most impressive overall weekend in two years at the Coke Zero 400 with a Coors Light Pole Award from Greg Biffle. 400 miles, some perseverance and a little luck later, the organization ended the weekend with top 10s all around.

Racing at the site of his lone victory – the 2011 Daytona 500 – Trevor Bayne led the way for Ford’s “second team,” slotting in third for his best performance in 2016. Teammate Ricky Stenhouse, Jr. followed in fifth, with Biffle slotting in eighth.

Saturday marked RFR’s first time with all three cars in the top 10 since Carl Edwards was a part of the organization. It also continued a recent string of good runs that have Bayne, Stenhouse and Biffle all sitting just outside of the Chase bubble.

Riding his second top 5 and fourth top 10 of the season, Bayne jumped two spots up to 17th in the series standings. The Tennessean now sits just 10 points back from the final transfer spot to the Chase, currently held by Ryan Blaney.

“To have a top-3 finish today, it’s really a great day for us and a great day for (RFR) and Ford,” Bayne said after the race. “For our organization to be on the pole this weekend, to have three cars in the top 8, two in the top 5, I think that’s kind of a landmark for us as an organization with the struggles we’ve had to get all three teams running strong on a weekend like this.”

Bayne’s enthusiasm was echoed by others within RFR. With his fifth top-15 result in the last seven races, Stenhouse closed a gap that was once over 60 points to the Chase bubble down to just 21 as NASCAR’s playoff inches nearer. Now in his fourth year in the Cup Series, the two-time XFINITY Series champion feels confidence in his organization, a feeling that’s he’s often been lacking.

“We had a chance to win and Trevor and Greg had a good run as well,” Stenhouse said. “Hopefully before the (regular-season finale at) Richmond we can continue to get our cars better and finish up front, maybe win one of these.

“You’ve got to build on any racetrack, it doesn’t matter where you go. We brought fast race cars. The whole shop did a great job of putting fast cars together and we did a good job of not tearing that car up and being able to work on it and bring it back to Talladega. Anytime you’re bringing fast cars to the racetrack it doesn’t matter if it’s a road course, mile-and-a-half, or superspeedway, it builds confidence in the guys that they know what they’re doing and we’re going in the right direction.”

While he made the Chase on points last season, Biffle’s 2016 season has been disastrous, with three DNFs and no top 10s going into Daytona. But the 19-time NSCS winner had a return to form on the 2.5-mile oval, claiming his first pole since 2013, leading a lap and surviving an attrition-filled race to score an eighth-place result.

Sitting 70 points off the Chase grid in 22nd, the 46-year-old isn’t likely to repeat postseason trips from years past. However, for the first time all year, Biffle looked every bit the talented driver Jack Roush hired him to be over the weekend at Daytona. He may not have enjoyed the same resurgence fellow veteran Tony Stewart has shown over recent weeks, but Biffle finally looked like a contender again, and that’s something to be proud of.

“We had a really good car,” Biffle said. “Two or three cars were definitely faster, but we stayed up front there and just got shuffled out of line. Lost track position and were just working our way back up and got caught up in that wreck. Accidents happen at these restrictor-plate tracks so we fought our way back up and finished eighth. Pretty impressive for a car damaged this much.

“We’re pretty happy. We definitely wanted to finish better than eighth and we wanted to do it differently than that, but we’re happy.”

All three Roush Fenway cars currently sit outside of the Chase grid with nine races remaining, and they haven’t necessarily shown the consistency that should prove necessary to sneak their way in. Still, coming off a season in which Stenhouse and Bayne finished 25th and 29th in the standings, respectively, that both drivers are within just 21 points of cracking the current field with the playoff looming shows just how much improvement the organization has made in a short time.

No, the Cat in the Hat’s organization isn’t the powerhouse it once was. They aren’t going to rattle off eight-to-10 wins in a single year. As a matter of fact, they likely won’t even reach Victory Lane.

Still, the group’s showing noticeable improvement for the first time in years. Even with Stewart-Haas Racing’s jump to Ford imminent, the gains have got to be comforting for RFR, Ford and their fans.

No one reaches the top of NASCAR – or any other major form of motorsport, for that matter – overnight. It takes months, years and sometimes even decades of hard work and grinding to reach the pinnacle of the sport.

That’s where Roush’s resilient squad finds themselves now. They aren’t at the top; they’re not even in the upper tier. However, for the first time in years, they actually appear to be gaining ground on those above them.