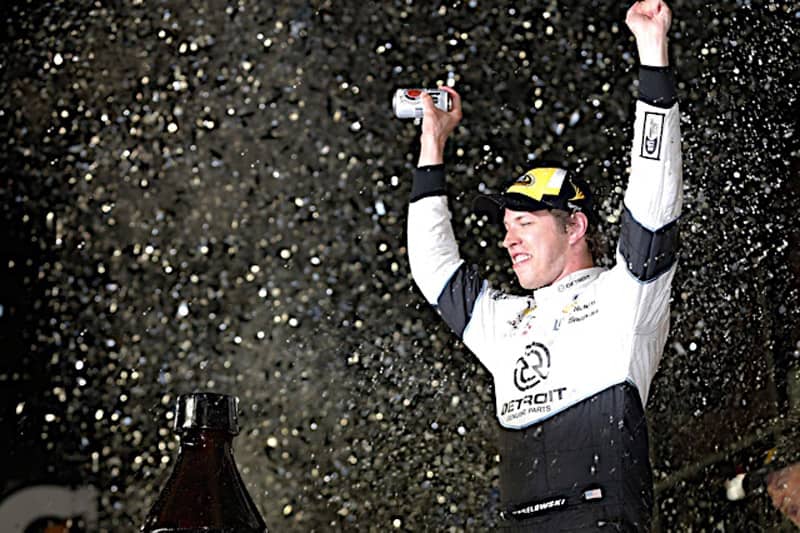 Sprint Cup: Brad Keselowski, The New Restrictor Plate King? – Every time the Sprint Cup Series goes restrictor plate racing at Talladega, or so it seems, Team Penske’s Brad Keselowski runs up front and contends for victory. Now, the 2012 series champ has added the other plate track to his resume, picking up a first win at the World Center of Racing Saturday night.

Keselowski was out front for 115 of 161 laps at Daytona, over three times the amount of laps led (38) in his 15 previous starts there. Even during your typical tense overtime restart at a plate race, the outcome rarely appeared to be in doubt.

Before this dominating performance, Keselowski’s track record down at NASCAR’s original 2.5-mile track was not very impressive. His best finish came in the 2014 Daytona 500, where he finished third to two-time 500 champion Dale Earnhardt, Jr. after starting 33rd. He was 20th this February with a car he freely admitted was junk.

Looks like Team Penske went back to the drawing board. Something was different about this weekend for the No. 2, part of a recent trend (see: Talladega in April) where Keselowski’s driving and chassis has reached another level. Despite three-wide competition throughout the pack, Keselowski was never in the midst of the crazy, posting an average running position under three. He started fifth and immediately went to the front on lap 2, coasting ahead with teammate Joey Logano and pseudo-teammate Ryan Blaney soon positioned directly behind.

Now, Keselowski has won the last two restrictor plate tracks and has five career plate wins overall, including four at Talladega. He earned his first ever Cup victory with the plates on and 25 percent of his career wins at NASCAR’s Cup level have come running this style of racing.

Those numbers still pale in comparison to former Hendrick teammate Earnhardt. But Junior has run the Cup Series far longer and Keselowski, who tied Kyle Busch for a series-best three victories this season is having the better year overall. With NASCAR’s most popular driver struggling – and aging – what we saw Saturday night could be a plate race changing of the guard. Dustin Albino

XFINITY: Mike Ford Brings Experience to Sieg’s Team – Hidden behind the surprise win of Sprint Cup full-timer Aric Almirola at Daytona was the performance of underdog Ryan Sieg.  By finishing third in the final XFINITY plate race of 2016, Sieg picked up his first top 5 of the season.  He also took a large step forward in making the Chase.  Sieg, driving for his family-owned operation currently stands 11th in the standings, 16 markers above the cutoff.

Daytona was also the first race in which Mike Ford served as Sieg’s crew chief, a strong pickup for such a small organization.  Fans might remember Ford, a journeyman in recent seasons for his success in the Sprint Cup Series.  Ford worked with Bill Elliott at Evernham Motorsports at the turn of the century, guiding Awesome Bill back to Victory Lane during the twilight of his career with Dodge.  Next, Ford served as Denny Hamlin’s crew chief during his early years in the Cup Series; the pair almost won a championship together in 2010.
Ford’s experience will be invaluable to Sieg if the No. 39 team makes the Chase.  The championship format will be new to most NXS drivers and teams, but not to Ford, who’s capable of the gambles small-timers like this one will need to succeed in the postseason.  If Friday night is any indication, it’s clear this crew chief pickup could pay strong dividends down the line. Bryan Gable
GABLE: Almirola Loses Asterisk With Daytona Win
FINLEY: Controversy Overshadows Frantic Final Lap At Daytona
Camping World Trucks: Tifft Keeps On Truckin’ – The best news to come out of the Camping World Truck Series this off week was the condition of part-timer Matt Tifft. The driver, who’s run three Truck races and another six in the XFINITY Series, underwent a successful operation to remove a brain tumor. Friday’s operation went so well the 20-year-old is already active on social media, sending the following message to supporters before leaving the hospital.

Video update! Thanks so much to everyone for all the positive thoughts and prayers pic.twitter.com/kdqANY3uoC

Tifft, who’s been driving for Red Horse Racing in the Truck Series, hopes to return after extensive rehabilitation and healing. A merry-go-round of drivers is expected to replace him in the No. 11 truck including German Quiroga, a former full-timer who’s already filled in the past few weeks.
Best wishes to Tifft for a speedy recovery from everyone at Frontstretch. It was a nice slice of positive news for the series after the Gateway “chicken fight” cost John Wes Townley and Spencer Gallagher a cool $27,500 combined, a bit of their dignity and perhaps a hit to the reputation of what’s otherwise been the most promising of NASCAR’s top three divisions the past few seasons. Tom Bowles
LUNKENHEIMER: NASCAR Penalties Too Light For Truck Series?
FESKO: Townley, Gallagher Pay The Price
IndyCar: Could the Series Return to Surfer’s Paradise? – In a year full of both renewed traditions and rumored overseas races for the Verizon IndyCar Series, a proposed Australian return offers a mix of the two.
In a report issued early last week, the Gold Coast Bulletin reported that it has “seen documents giving a Coast-based consortium the right to negotiate for an IndyCar race in Australia.” The rumor could potentially place IndyCar on Surfer’s Paradise, a course that CART / Champ Cars raced historically in companion with the Gold Coast 600, an event ran by Supercars (formerly V8 Supercars).
The news, while unofficial, was enough for IndyCar to release a statement on its plans to race overseas, both at Surfer’s Paradise and other facilities.
The statement reads: “IndyCar is in the process of investigating potential venues for the Verizon IndyCar Series schedule, which includes a number of conversations with international parties interested in hosting an event. IndyCar has an extended history at Surfer’s Paradise and many of its teams and drivers fondly recall the great events and large crowds in Australia. However, at this time, we are not going to comment on specifics as it pertains to the status of any prospective venue.”
This is the second rumored IndyCar race overseas to prop up in 2016. The last – a race in China – died out in June. IndyCar last raced at Surfer’s Paradise in 2008, a non-championship event coming after the close of the season at Chicagoland Speedway. Aaron Bearden
BEARDEN: One Last Look Back At Road America

Formula 1: Hamilton Continues His Surge – Lewis Hamilton earned his third Formula 1 win of the year at the Austrian Grand Prix after passing his teammate, Nico Rosberg, on the final lap.  Max Verstappen of Red Bull took second, with Ferrari’s Kimi Raikkonen standing last on the podium.

Rosberg, after contact with Hamilton on the last lap, limped home in fourth, followed by Daniel Ricciardo from Red Bull.
The collision between Rosberg and Hamilton came after Hamilton had led much of the race, only to be felled by a slow pit stop.  The two engaged in a close battle over the final laps and, as Hamilton made a move for the pass, Rosberg attempted to block off the apex of Turn 3. Both Mercedes and Rosberg would later state that his brakes had been compromised, switching into a passive mode on the final lap.
Whether the car or Rosberg’s driving were to blame for the issue, the outcome closed the gap between the two Mercedes drivers in the championship standings, with Rosberg now holding only an 11-point gap.
It should be noted that Ferrari’s Sebastian Vettel crashed out of the race early when his right rear tire exploded.  Vettel appeared displeased with the team’s strategy, something he felt lacked the aggressiveness necessary to compete for the win.  Huston Ladner
Sports Cars: The Good News Keeps Coming for Ford Chip Ganassi Racing – Ford Chip Ganassi Racing is on an emotional high at the moment.  A couple of weeks ago, the American branch of the team won the GTE-Pro class at the 24 Hours of Le Mans with the lineup of Joey Hand, Dirk Müller and Sebastien Bourdais.  Sunday saw the team take a 1-2 at Watkins Glen.
Saturday saw Ford Performance, buoyed by their results so far, step up to the plate even more. Ford Performance announced that the Ford GT factory program, which was originally scheduled to last through the end of 2017, has been extended to the end of 2019.  Ford Chip Ganassi Racing will continue to be the team of choice for the factory program.
Quite simply, Ford wants to say that they’re here to stay.  Get used to it.
“We wanted to make sure everyone knows that we are committed to sports car racing globally with WEC and IMSA,” Raj Nair, Ford’s executive vice president and chief technical officer, said in a press release.  “The stated goal of our Ford GT program was to win Le Mans, and we’re very proud that we were able to do that in our first year. To commit to a full, four-year assault on both the IMSA and WEC championships shows how serious we are about taking Ford GT racing around the world.”
So far, so good for the Ford GT.  The road-going version of the car launches later this year and a plethora of racing successes should definitely help its reputation. Phil Allaway
ALLAWAY: Action Express Racing 1-2 In Sahlen’s Six Hours

Of course Brad is King. This season.