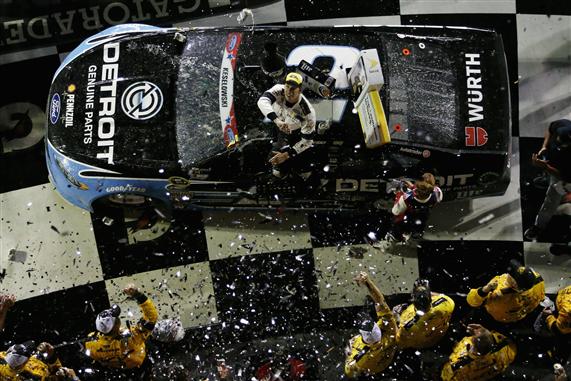 Roger Penske is one of the most respected names in motorsports. With over 400 major race wins across multiple racing disciplines and 28 national championships, no one doubts his ability to put together a winning race team.

Many of those numbers were earned in NASCAR and Team Penske continues to build on those statistics to this day.

Saturday night, Brad Keselowski won the Coke Zero 400 at Daytona International Speedway, earning Team Penske’s 100th career Sprint Cup Series victory in the team’s 50th anniversary year. The win was Penske’s third at Daytona, the first ever in the July race and his first for the No. 2 car. Ryan Newman and Joey Logano won the Daytona 500 while driving for this organization in 2008 and 2015, respectively.

As expected, the 79-year-old owner was proud of how competitive his race team is but gave more credit to the individuals comprising that group rather than to himself.

“To win 100 races with the competition that we have in this sport is amazing, and it comes down to the people,” said Penske. “I guess Paul [Wolfe, crew chief] and I get to sit up here, but it’s all the hundreds of people that work for us every single day that make a difference, and there’s no question that Ford has stepped up.  You could see with qualifying, certainly with Greg (Biffle of Roush Fenway Racing, a Penske ally) … the car was strong.  I think it was a complete package tonight. It couldn’t come at a better time. 16 years ago we won our first 100th race in IndyCar, so it took a long time

to get here on the NASCAR side. But pretty important night for us.”

While Penske’s success and notoriety used to stem primarily from the IndyCar side, the stable of drivers in both NASCAR and IndyCar are competing for wins and championships every week, year in and year out.

However, that trend toward the front has not come without its difficulties. Both of Penske’s current wheelmen – Keselowski and Logano – have a tendency to swirl in the center of controversy. Whether it’s their actions on the track or comments made afterwards, it is not uncommon to see either the No. 2 or No. 22 teams in the headlines for all the wrong reasons.

This past weekend was no different. Logano got into the back of Kurt Busch coming to the checkered flag, causing Busch to spin through the infield grass and fall from second to 23rd in the final running order. Though Logano said the contact was unintentional, Busch was understandably frustrated and called Logano out afterwards.

Penske responded to the incident during his winning owner’s post-race media availability.

“I have to look at each situation accordingly, and I would say this, that Joey has taken, I think, some undue criticism from my perspective based on some of the things that have happened,” he said. “Certainly you can go back, and I could name three or four things that certainly weren’t his fault.

“But quite honestly, I think he’s one of the best drivers on the racetrack out there day in and day out, and sure, people make mistakes. A lot of these drivers can knock somebody off the track, and they say, ‘Hey, I’m sorry, you follow me,’ and they move on. They don’t let Logano do that. As far as I’m concerned, I’m behind him 300 percent, and I’ll talk to Kurt, he didn’t do it on purpose. It could have been a big mess down there tonight, too and at the end of the day, that’s racing as far as I’m concerned.”

While basking in the glow of victory, Penske continued to defend his drivers.

“Look, this is not a popularity contest, and anybody that thinks it is, you know, we shouldn’t be sitting here tonight,” the car owner continued.  “This is racing, and unfortunately some people have different ideas.  But look, I’ve got — I wouldn’t trade these two drivers for anyone.  They’re young, they’re aggressive, they win races.  They work well with the sponsors, and they’re high-integrity guys, so move on from there.”

So far this season, Keselowski and Logano have combined for four victories (Keselowski with three, Logano with one) and it’s doubtful the numbers will stop there. Logano had more victories than any other driver last season with six, proving to be a championship favorite until a run-in with Matt Kenseth put a virtual end to Logano’s championship hopes. Keselowski’s three wins, meanwhile are tied with Kyle Busch for the most of any other driver through 17 races.

With nine races left in the regular season, Team Penske has to considered one of the strongest teams out there. And though 100 NASCAR race victories was an incredible accomplishment, Penske is already looking toward the future.

“To do it here on the 4th of July weekend, it’s amazing,” Penske reiterated. “It’s a byproduct of all the good people we have, and to me we’ve got to continue to remember that.  I just think that Paul and the team, we lose more than we win in this business, and you’ve got to know how to deal with the downs and take advantage of the ups.

“I guess 100 wins puts us in a good position, but you look at the Gibbs and you look at Childress and certainly Hendrick and some of the other teams, these guys have won a lot of races.”

So what’s next? The goals remain the same for Penske and his drivers; keep winning, keep running up front and try and add to a collection that’s among the best in racing history.

Logano and Keselowski will probably both be around and winning races for a long time. While reaching such a lofty goal might be a ways in the future, it’s obviously not outside of the realm of possibility. In fact, it’s probably only a matter of time before Penske and his team can stand in front of a banner that says “500 wins” across multiple racing series.