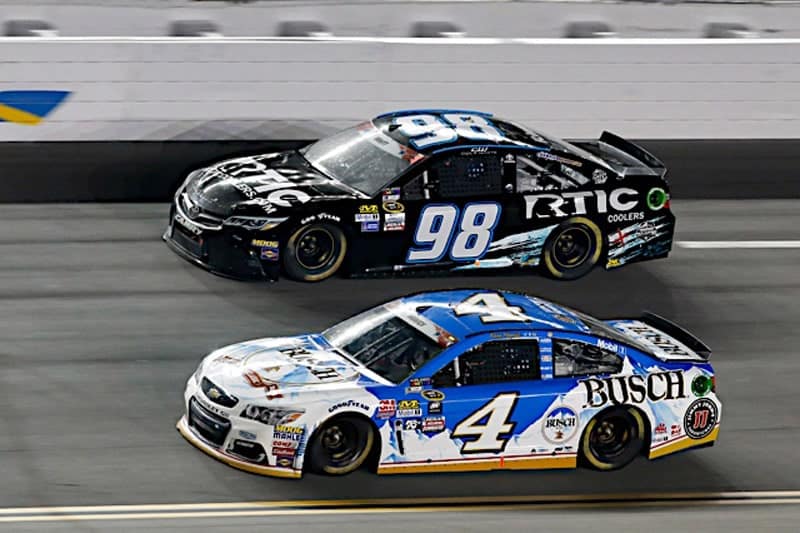 When the Sprint Cup circus takes to the track this Saturday night under the lights at Kentucky Speedway, it will mark the end of the first half of racing in the 2016 season with 18 races in the books and 18 races still to run. So far this year, we’ve had eleven winners (none of whom were first-timers) with all the usual suspects (sans Dale Earnhardt, Jr.) picking up at least one checkered flag. All told, at least in the opinion of this writer, we’ve seen some pretty good competition across the board. Sure, there have been some snoozers – aren’t there always — but for the most part memorable finishes have dotted the landscape. The season-opening Daytona 500, Phoenix, Richmond and Sonoma all spring to mind.

The new aero package has also led to an improved quality of racing and more passing throughout the field – if not necessarily at the very front of the pack – and NASCAR should be credited for continuing to tinker with the product. That’s not to say there isn’t more that can be done, but the situation is heading in a positive direction and trending upward is never a bad thing. With just nine races remaining before we start the Chase, there are still playoff places up very much up for grabs so it should be a fun stretch of racing before the postseason starts.

TWO: Next up, Kentucky

This weekend, we head to Kentucky Speedway for Cup race number six at the one-and-a-half-mile tri-oval track in Sparta, Ky. Kyle Busch, you’ll not be surprised to learn, won the inaugural race in 2011, an event that was mired by some hideous logistical issues

with many thousands of fans not even making it to the track. Thankfully, the infrastructure problems have been solved and Brad Keselowski (twice, 2012 & 2014) and Matt Kenseth (2013) have also added their names to the winner’s roll. This time last year, Busch struck again. It was the second win for him at Kentucky, part of a four victories in five races streak for the 2015 series champion. One might say it was the peak of Busch’s regular season en route back from terrible leg injuries he had suffered in the season-opening XFINITY race at Daytona.

Since that 2015 event, the track has been repaved with the banking in Turns 1 and 2 increased from 14 to 17 degrees. The pit road width has also been doubled with the racing surface in those first two turns some 18 feet narrower as a result (74 feet to 56 feet today.) So Saturday night’s race will have an element of unpredictability but that’s nothing new at Kentucky, to be fair. Could be an interesting one to watch this weekend.

Sonoma Raceway has traditionally been a happy hunting ground for Clint Bowyer. Statistically speaking, it is his best track with an average finish of 11.5, one victory, six top 5s and eight top 10s in eleven attempts. But an electrical fire just five laps into the race saw Bowyer out early last Sunday and hugely frustrated with what has been a tough year for him. Of course, the signs are promising for 2017, when Bowyer will take over from Tony Stewart in the No. 14 car run by Stewart-Haas Racing. It was a point noted by Brian Vickers on Monday’s edition of NASCAR America Live on NBC Sports who described Bowyer’s season as a “growth year” explaining how it is “challenging, frustrating and hard every week” to run in underfunded equipment.

So Saturday night’s ninth-place finish at Daytona was just what the doctor ordered for Bowyer. It was his third top-10 result of the year, paired with a seventh-place effort at Talladega Superspeedway and an eighth-place run at Bristol Motor Speedway. Before long, the beleaguered Bowyer will be back in the top echelon equipment he yearns for but for now it’s the small victories that matter and Saturday’s bounceback performance was just that.

Brad Keselowski’s third victory of the season (and series equal best with Kyle Busch) was very much a landmark win for the entire Team Penske organization. All told, it was team owner Roger Penske’s 100th win at the Cup level which makes him just the seventh owner to have hit such a prestigious mark. The other six, for the record (in descending order) are: Petty Enterprises (268 wins), Rick Hendrick (242 wins), Jack Roush (135 wins), Joe Gibbs (also on 135 wins), Junior Johnson (132 wins) and Richard Childress (105 wins). “I would just say that the 100th in NASCAR is something special,” said the captain post-race to Holly Cain of NASCAR.com. “To do it here on the Fourth of July weekend, it’s amazing. But it’s a byproduct of all the good people we have, and to me we’ve got to continue to remember that.”

Race winner Keselowski echoed his boss’s sentiments. “It’s a huge deal, 100 wins for Roger here at the Sprint Cup level,” he said. “I know his next goal will be 200. I’ll probably hear it tomorrow… But the captain, he likes to look forward, and I think that’s a good thing.”

Whether Penske hits 200 remains to be seen, but you can expect plenty more wins either way, perhaps starting as soon as this weekend in Kentucky.

Finishing things up this 4th of July weekend, it would be remiss of me not to mention Cole Whitt, who finished 11th at Daytona in the No. 98 Premium Motorsports car, his best finish in 101 starts at the Cup level. Remember, too, that Whitt runs in for a non-Charter car so the team has to qualify each and every week.

Proud to bring the @RticCoolers car home p11 tonight. My guys have deserved a good run with all their hard work. #thankful

Yes, it is just an eleventh-place finish but to Whitt and team it’s almost as good as a win. Well done, folks. Well done.