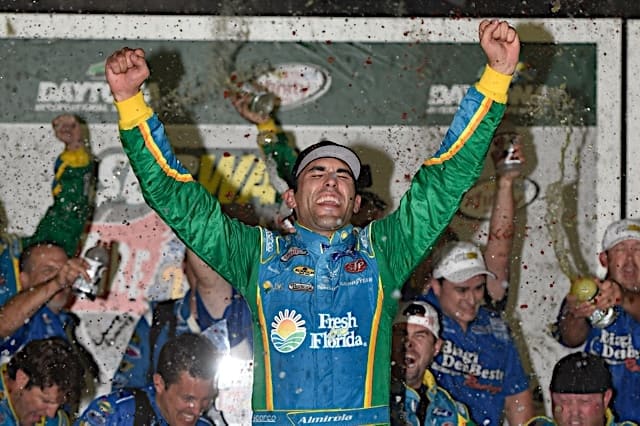 Editor’s Note: Are you receiving the FREE Frontstretch newsletter? If you’re not, you’re missing out on great, exclusive content like this one from S.D. Grady, Mark Howell, Phil Allaway and more! Click here to sign up and see what you’re missing!

Aric Almirola finally managed to add a win to his XFINITY Series stats without an asterisk after nine long years. However, the victory did not come without some controversy.  Who is NASCAR Nation mad at this week?  Usually after a superspeedway race, we’re throwing darts at drivers, the track itself and the sport’s officiating.  This time around, there’s only one bad guy on the list: NASCAR.

It is expected that on the final lap of the race at Daytona, especially one ending in overtime there’s going to be shenanigans in the pack.  It is a guarantee somebody is going to get out of shape and start the chain reaction that will shuffle the final results while the field wrecks at 180 mph.  Friday night did not disappoint in this aspect.  The carnage on the backstretch while Almirola and Justin Allgaier raced to the checkers was commensurate with most “Big Ones” at the storied track.

It is what happened between the wreck and the finish line that got our goat.  This may be one of those damned if you do/damned if you don’t moments, but it really belonged in the no-brainer column.  David Ragan spun his No. 18 into the outer wall, resulting in about a half-dozen cars doing the pinball routine across the track with one actually managing to strike the inside wall. With the field running full speed ahead toward the finish line, it appeared that we had a bona fide caution on our hands at that moment.

Race control held off a full nineteen seconds before dropping the yellow flag, permitting the remainder of the field to wade through shredded fenders, smoke, and spinning cars while competing for position.  Due to the extended pause between the detonation of the pack and the officials’ call, who was actually in first place became something of a mystery.

From every camera angle presented to the viewing public, it was not clear at all that Almirola was in front of Allgaier.  If you stopped the playback a second before or after the selected “moment of caution,” the leader changed.

Unlike Sprint Cup, the XFINITY Series does not rely on transponders and scoring loops to determine the final position of cars during a caution that freezes the field at the finish. They do it old school, using video and timing marks to figure things out. If there are official camera angles, that has yet to be disclosed to the public; officials have a mess on their hands. In the meantime, we are entertained with something akin to a shell game while waiting for the official results.

What is perhaps the most galling about the last lap is the fact NASCAR is holding to the line that they dropped the yellow flag in the best interests of the competitors’ safety.  What? With multiple cars pinging off one another and the wall, what psychic powers were employed in race control that declared the drivers in the moving junkyard were just fine?

Then, NASCAR Vice President David Higdon issued a statement declaring it was “pretty clear” who was ahead at the time of caution. Clear to whom?

So, let’s get this right.  Throwing the yellow instantly when a car spins midpack on lap 50, but doesn’t hit anything, is standard operating procedure… in the best interests of driver safety. If the same wreck happens on the final lap, we just let everyone pile into the dense smoke cloud and pray for the best… in the best interest of competition.

It doesn’t seem possible to put a logical spin on this one. Combined with the fuzzy declaration of the race winner, it makes me wonder if that asterisk should remain in Almirola’s win column.

It is just another consistent day in the offices at Daytona. What else should we expect?

Matt Tifft did not compete in the XFINITY race on Friday night as he was scheduled to undergo brain surgery Saturday to remove a tumor. It is a testament to his surgical team that he was sitting up and watching Coke Zero 400 just one day after the procedure.  His Twitter updates are positive, if a little graphic. I wish him a speedy recovery!

ICYMI: Around 12am last night I was cleared from the hospital and am now healing at home 2 days sooner than expected pic.twitter.com/J6YhFBSRCT

Now. Few words about the race !!!
You were soooo
Right In everything so said about it !!?Watching the boob tube we thought NASCAR had lost their yellow flag – there it was after All
positions have changed!!!!
IAm sure it was nice for Aric to get a real win
But ” little gator”
Had been
Running his b— off this year and what s gentleman he is but think
He should have had the win
IsNascar had t lost the yellow flag !!!!!

It was plain to me that Nascar wanted the #7 to win because it is Jr’s car. Why else did they wait so long to throw the caution. If you notice the caution didn’t come out till it looked to me Justin was ahead. I didn’t care who won just would like a little consistency from Nascar. I know that is like believing in Santa Claus. I was surprised when #98 was declared the winner. I think Nascar screwed up when they put the caution out and somewhere was a clear view of Amorila being ahead and Nascar had to declare him the winner. Just my opinion but why hold the flag as they didn’t wave the caution till Alliguyar caught up.