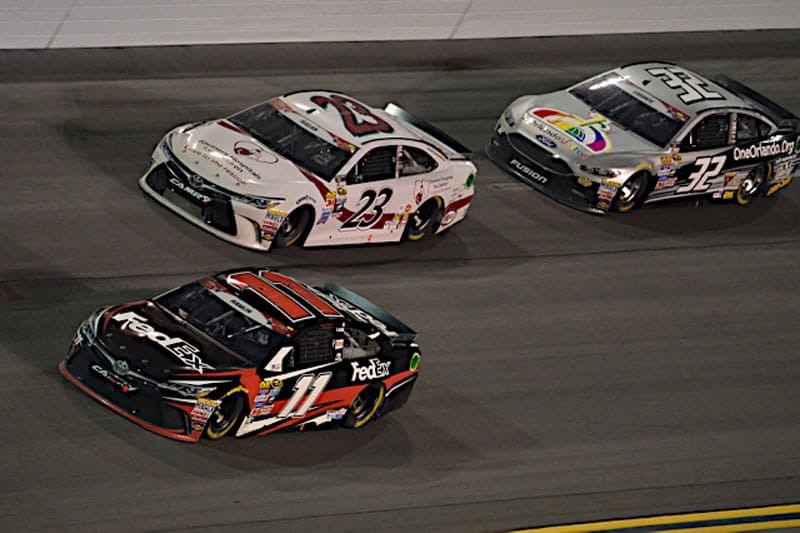 With the second half of the NASCAR season upon us, there are many questions that have been put behind. The annual 4th of July weekend at Daytona International Speedway assures fans that the season is full swing, usually creating a hectic race.

The race lived up to expectations, leaving fans wondering about the package due to one driver – Brad Keselowski – leading over 100 laps at the superspeedway. It’s nothing that hasn’t been seen before, but the passionate fan base wants their driver to be up front, able to make passes for the lead, similar to the package from 10+ years ago.

There is something about the Daytona race in July that makes it special and it’s hard to understand. Frantic racing for the win, underdogs, a Chase berth on the line, all of these things accumulate to hard racing, which explained Saturday night’s bent sheet metal and hurt feelings.

Yes, there was a 19-car pileup just past halfway,  but the big one is always going to happen in tight racing. The competitors know that a big crash could be right around the next turn. But with this race being the last wild card until the Chase, combined with a tight bubble separating 13th to 20th,  one wrong move could crumple a season.

Thankfully, there were no airborne crashes in this week’s edition of NASCAR chaos on a restrictor plate track, but fans were still wondering why it’s hard to pass and what this means going forward for Talladega in the fall.

Q: “Should NASCAR do anything with the plate race package before the next Chase race at Talladega? Or do you think the racing is fine the way it is? I was frustrated with the inability for anyone to pass the leader Saturday night… It seems like my guy,  Dale Jr. is suddenly stuck in the pack and can’t go.” – John Jefferies, Atlanta, GA

A: Ever heard of the saying comparing apples to oranges? That’s exactly what comparing Daytona to Talladega is.

The two tracks are such different animals within themselves, causing the triumph of wining and the agony of defeat. This package has been used since the tandem draft was broken up, and remembering back to four or five years ago, that was a mess.

Currently, the package isn’t necessarily the problem, but like every option, it could be tweaked.

NASCAR is not going to do anything with the restrictor plate package before Talladega in October because of where that race sits. It’s the cutoff to make the Round of 8 in the Chase. Expect to see familiar foes at the front – Keselowski, Joey Logano, Kyle Busch, etc. The Nos. 2 and 18 teams have finished in first and second each of the last two plate races. I think you can safely say they’ve mastered the package.

If this question is solely based off the fact that Earnhardt doesn’t have a top-20 finish in the three plate races this season, then Junior Nation needs the package to be fixed. Last year he won half of the races on plate tracks and finished second and third in the other two events, leading 256 laps along the way. In the other 32 races combined, the No. 88 was out front for just 31 circuits.

More times than not, the team that leads the most laps wins the plate race. Denny Hamlin won the Daytona 500 after being out front for 95 laps while Keselowski led 115 on Saturday evening.

The bottom line is the racing isn’t all that bad at plate races, even when it isn’t a crashfest. This isn’t ballet, people. It is hard to pass the leader … and it should be.

Q: “After what happened Friday night at the XFINITY race, the way they threw the caution, should Aric Almirola still have an asterisk next to his name? Or did he finally win one fair and square?” – Ryan Nemell, Pueblo, CO

A: How do you determine whether or not someone has an asterisk next to their name? I mean Almirola stated it during his post-race interview, but that doesn’t mean it’s correct.

Sure, he got credit for winning at Milwaukee in 2007, driving for Joe Gibbs Racing, because he started the race, though he was later replaced by Hamlin after the initial green flag. Technically he got credit for leading 107 laps that June evening. Though he wasn’t driving the car, that’s about one-third of the laps he’s been credited with leading in this series.

Back to Friday evening, Almirola won the race fair and square. The ending looked strange because 20 seconds went by before NASCAR threw the caution, but they had to throw the caution knowing and not knowing what was happening on the backstretch.

There were some hard hits in that wreck. Darrell Wallace, Jr. smacked the inside wall hall hard and took to Twitter following the race criticizing NASCAR for the way they called the ending.

Ultimately, NASCAR did the right thing and Almirola should and did get credited for the victory. He was out front when NASCAR decided to throw the caution. I’ll estimate and say that the field had 200 yards before they crossed the finish line, so fans won’t understand why they threw the caution, but NASCAR obviously felt like they needed to.

All of Almirola’s victories, at least in the top two series, have question marks around them, two of which came at Daytona. In 2014, he won his way into the Chase for the Sprint Cup by staying out, while others pitted and the race was called due to a downpour. Again, that’s not his fault. On that day, the No. 43 team outsmarted the competition.

It’s more of a funny coincidence how all three races played out. For each one of them, fans sometimes say ‘oh he didn’t earn this one,’ but he absolutely did. Whether or not you agree with the NASCAR rule book is up to you, but all teams are required to play by the rules and he’s done nothing wrong in any of those three events.

If anyone is to complain about the ruling, it should be Justin Allgaier. If NASCAR had let the field make the dash to the checkered flag, I think he would have won. But this is an easy decision and NASCAR got it correct. There is no asterisk.

Q: “Who do you think is the biggest free agent left on the market now that some of the big names have re-signed with their current teams and Tony Stewart is 100 percent retiring?” – Jamie Reichert, Wilton, CT

A: There is nothing quite like the NASCAR silly season. Moves like Matt Kenseth and Carl Edwards to Joe Gibbs Racing and Kevin Harvick to Stewart-Haas Racing have all worked in recent memory. But this year, there isn’t that top driver who is out there waiting to be picked up.

The aforementioned Almirola, Jamie McMurray, Paul Menard, Ryan Newman and arguably the best driver in the Cup Series that hasn’t won a title – Denny Hamlin – all have expiring contracts at the end of the 2016 season. Let’s take them one-by-one.

Almirola and Smithfield, which has stepped up its primary sponsorship to 31 races this year, both have expiring contracts this season, but Richard Petty Motorsports is going through a rough patch. He has yet to record a top-10 finish, sitting 25th in the standings. Since 2013, his lowest points finish was 18th, but he referred to this year as “absolutely horrible” after his win in the XFINITY Series. If Smithfield continues to back him, he will probably end up back at RPM.

I don’t see McMurray going anywhere. There aren’t many places to go, plus Chip Ganassi has been loyal to him in the past. Compared to last year, the No. 1 team is certainly struggling, accumulating just three top 10s in 17 races. Still, I expect him to remain with Ganassi.

Menard might be the most interesting one because he has full-time sponsorship from his dad, John Menard. He will definitely have a ride, but possibly not with Richard Childress Racing. The No. 27 team is 23rd in the Cup standings, coming off a season where he made the Chase for the first time in his career.

Newman is also an interesting one because of his age. Expect Ty Dillon to be called up to drive full-time for his grandfather Richard Childress. The team could expand to four cars, but that’s never worked in the past. The Indiana native is someone to look forward to possibly having a new ride for 2017.

It’s very unlikely that Hamlin will leave JGR, but it wouldn’t be the biggest surprise in NASCAR history. Over his 12-year career, the 35-year-old has 27 victories driving the No. 11 machine. It’s hard to see him leaving, but with Erik Jones and Daniel Suarez waiting to be called up from the XFINITY Series, it’s worth putting him on the list. He is the biggest name driver out there without a contract for 2017, but he and Joe Gibbs have a special bond that is rare in this sport and will be tough to break.

If you have any questions about NASCAR tweet me @DustinAlbino or email me at dustinalbino20@gmail.com. Then check back next week to see if your question appears.

“the triumph of wining”?

You forgot the h.