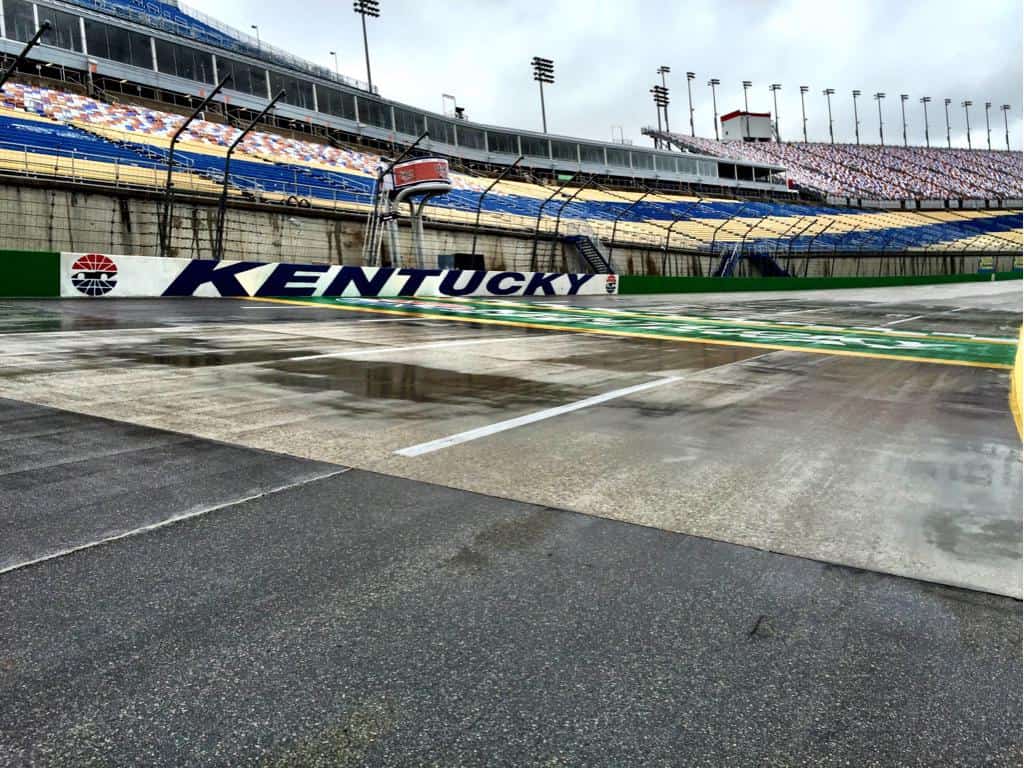 NASCAR is heading to a brand-new track this weekend: Kentucky Speedway.

OK, it’s not new in the sense that teams have never been to the facility before, but in the fact that the track itself has undergone a huge renovation in the past year. Gone is the old asphalt, bumpy and rough and tough to drive. Gone, too, is the 14-degree banking in turn 1. In their place is a freshly paved track and narrower, more-banked turns 1 and 2 (turns 3 and 4 retain their 2015 shape).

It’ll be interesting to see how drivers handle to new, non-uniform track in Sparta, and even more interesting will be to see if Kyle Busch, Brad Keselowski, Jimmie Johnson and Matt Kenseth can all continue their dominance at the track. Both Busch and Kenseth average a top-5 finish at Kentucky. Keselowski has two wins at the track, and Johnson, while winless, has never finished outside the top 10.

But repaves can throw a wrench into some drivers’ pedigree at a track and jump start another’s. Case in point: four tracks that have recently gone through a repave have seen a changing of the guard when it comes to the dominant driver at the track.

Prior to undergoing a repave and reconfiguration in mid-2011, you could expect Johnson to be among the top finishers at the Arizona track. He won four of five races there between 2007 and 2009 and finished fourth in the other race in that stretch. And while Johnson was the dominant driver, plenty of others were able to find Victory Lane. The five races before the repave saw Johnson win once, joined by Mark Martin, Ryan Newman, Carl Edwards and Jeff Gordon.

But then came the repave, and while Johnson has been decent since then – four top 5s – he has yet to win again. Replacing him on the top of the mountain is Kevin Harvick, who had won twice at the track before the repave but has been unstoppable at the track since 2012. He has won six times since then including four in a row, a streak that would likely have extended to five last fall if rain hadn’t stopped the race early.

The Tricky Triangle underwent a repave prior to the 2012 season as part of a major upgrade to the track and surrounding facilities. Prior to the new asphalt being laid down, there had been a plethora of winners but it always seemed as though Denny Hamlin would be among the drivers battling for victory. He scored four victories at the track between 2006 and 2010, including two of the final five races before the repave. Greg Biffle, Keselowski and Gordon also won races before the repave.

Since then, however, Hamlin has been mediocre at the Pennsylvania track. His average finish is a paltry 16.25, lowered in part by multiple crashes at his best track. Hendrick Motorsports, on the other hand, went from OK at the track to great. The team won only two races at the track from 2005 to 2011, but since the repave in 2012 it has won five times, all coming in a row involving four drivers – Johnson, Gordon, Kasey Kahne and Dale Earnhardt, Jr. Even Chase Elliott, Gordon’s replacement in 2016, showed speed in his first outing at the track earlier this season.

Michigan, too, underwent a repave before 2012. The track was already well-known for its wide groove and speed, but the latter was increased even more with the new pavement. Pole winners used to average a high 180-mph lap time in Brooklyn, but six of the nine pole speeds since 2012 have been 200-plus mph.

Hamlin again seemed to have Michigan figured out in the five races before the repave, winning two of them and tacking on two more top-10 finishes, but he’s lost his touch since then: an average finish of 20th.

In his place now? Joey Logano, who is riding a streak of seven-straight top 10s. Included in that streak is two wins, including one earlier this season. It should be noted that all of these races have come during Logano’s tenure with Team Penske, and teammate Keselowski hasn’t finished worse than 12th during the same stretch. In the five races before the repave, Team Penske cars only had three top 10s between the Nos. 2, 22 and 77 cars.

Kansas was added to the Cup schedule in 2001, but in mid-2012 it saw a repave. In the track’s first 13 races, there were a total of four repeat winners – Gordon, Johnson, Biffle and Tony Stewart. In the eight races since the repave there have already been two repeat winners – Logano and Kenseth. Kenseth, in fact, has been among the best since the repave, never finishing below 14th.

Since 2014, however, it isn’t Kenseth but his Joe Gibbs Racing teammate Kyle Busch that has had the best string of runs. Historically abysmal at the track, Busch has three top 10s in his last four races (he sat out the May 2015 running with an injury), including a breakthrough win earlier this season. Harvick has been the second-best since 2014, he too with three top 10s. And Newman, surprisingly, has been fast since the repave, with three top 10s in his last five trips to the track.

So it seems as though Busch and Keselowski have some worrying to do this weekend. If history is any indication, they could very likely be watching someone else celebrate in Victory Lane on Saturday night.