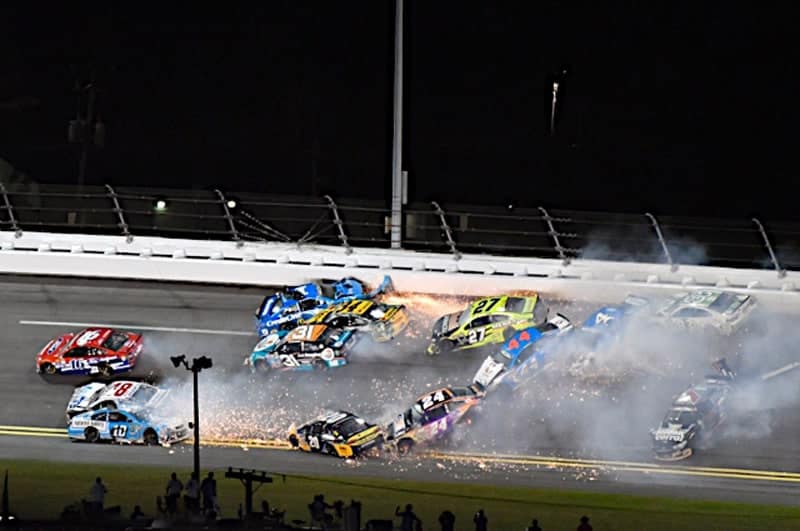 This past weekend highlighted how the concept of racing can go awry.  At its most basic, racing seems to focus on the idea of trying to outrun other people and/or teams.  To go with that wonderful staple, Merriam-Webster sees things like this: race a competition between people, animals, vehicles, etc., to see which one is fastest.  That is rather simple.

So how does it get mucked up?

Let’s start with the last race of the Formula E season that everyone surely watched.  The two drivers with a chance to claim the championship, Sebastien Buemi and Lucas Di Grassi, started right up at the front.  When the lights went dark, they blasted off – and then straight into each other.  They hadn’t even made it to turn three and they both now had no chance of winning the race, competing for a podium, or even managing a top-ten finish – meaning no points.

They both, however, were still the only ones who could take the championship.  After making the change to their second cars (because in Formula E a driver races two in each event), the goal for each was to set the fastest lap of the race, a mark that comes with two bonus points – and what would be the difference maker.

Here’s where the concept of racing gets muddled.  The goal of the race is to win but with regard to a championship, that’s a different strategy.  Di Grassi took to using his car as a de facto moving chicane, slowing Buemi’s attempts at least three times.  Should the stewards have removed Di Grassi from the track?  Maybe.  But if Di Grassi is maintaining a threshold speed then it is difficult to do so.  This example illustrates how the rules and parameters of an even may go well beyond the simple concept of racing.  That Buemi did finally post the fastest lap, earning the championship shows that speed does matter.

Then there’s the madness that is restrictor plate racing.  When the drivers who get wrecked out early appear to look relieved, that should be a clue to everyone.  But the mere fact that one of the strategies employed at Daytona and Talladega is to drive around in the back and hope to miss the big wreck shows that there’s something wrong with the product.  Since when is lollygagging a good idea in a sport where the whole goal is to go fast (ignoring fuel mileage endings here)? That seems contradictory to the point.

We can all be thankful that the silliness is behind us and move on to some more actual racing – or something like it.

Happiness Is… Kentucky.  Not too long ago the Kentucky track gave itself a black eye, when it stumbled and fell on its face.  The traffic surrounding the event could not have been managed much worse and it looked like the track just wasn’t ready to be on the big stage.  But that was then and the track in the Bluegrass State looks ready to shine.  Let’s look at the positive.

To start, the track gained a new surface since the series visited last.  Now the drivers often aren’t too excited about new pavement but it may very well help this facility.  In conjunction, the banking in turns one and two was raised from 14 degrees to 17, offering the chance for the groove to widen out and provide for different lines.  Then’s there’s the fact that NASCAR will be trotting out the adjusted aero package again – the same one that debuted at Michigan.  Now Dale Jr. may have stated that everyone talks about packages too much, the overall results from its previous use looked good.  All of these aspects look to be a wonderful conflation of who knows what will happen.  Awesome.  And even better, no drafting.

Happiness Is…Teammates. This past weekend also showed one of the fascinating aspects of modern day racing – teammates.  Are they with you?  Against you?  Do they get along?  What’s it like to be around any of these drivers in their team meetings?  These are all things that will never really be known.

Joe Gibbs Racing has tended to find a way to make things work between his motley assortment, but restrictor-plate madness can bring about the cracks in any arrangement, as heard on the radio from Kyle Busch in regard to Denny Hamlin.  Then there’s Penske, where Joey Logano pushed Brad Keselowski out front and then himself faded to the back.  Good teammate move?  To add to the mix, the combustible duo of Lewis Hamilton and Nico Rosberg tangled on the last lap of the Austrian Grand Prix, with Hamilton taking the win and Rosberg limping home to fourth.

What’s to be happy about here?  That it pays to remember that all these drivers are independent contractors and are ruthless.  It’s difficult to call drivers under the same organization teammates, they’re more like associates than anything.  The more they act like the independents they are, the better that things will be for everyone.  More!

Happiness Is…Wonderful Weekend.  Talk about a good weekend of racing – and it even starts on Thursday.  Yes!  The truck series will be the first to go, laying down rubber at Kentucky on Thursday.  Have things been shaken up in that series by the youth movement or is Matt Crafton just hanging around and doing what he does?  The Chase may mitigate Crafton’s steely veteran prowess.  The next night, the XFINITY series takes to the tracks, when Darrell Wallace Jrl. will look to see just how many Muppets are officiating the race.  Or perhaps because it’s not restrictor plates, it will be a different assortment of characters.

Saturday is Cup day.  The question there will be whether the newly minted Kentucky surface will assist or hurt the night race – when the racing isn’t always at its best.  The hello Sunday.  The Formula 1 drama between Hamilton and Rosberg will play out at the Silverstone circuit for the British Grand Prix.  As these two are the likely ones to hoist the championship trophy, this stretch just prior to the summer break is critical to go on a high note.  And to cap the day, IndyCar will be hitting the small oval of Iowa Speedway.  Will Power may be on a tear but can he keep it up at a track where he’s struggled?  Do the Honda’s regain their form at a place where they flourished?  Sounds like a good weekend.

Be advised: weather is on the way to Sparta & it aint pretty. The repave at Kentucky Speedway was long over due, but the question everyone seems to be avoiding is: were the drainage issues addressed prior to laying down the new asphalt? Bcuz, similar to Texas Motor Speedway, another Speedway Motorsports, Inc track, with similar design & construction flaws, KYS is/was known to have been plagued by “weepers”, due to an improper base structure & storm drainage system. This will be put to the test this weekend, since sever t-storms are due in the Sparta area at around 6pm [Thrusday].