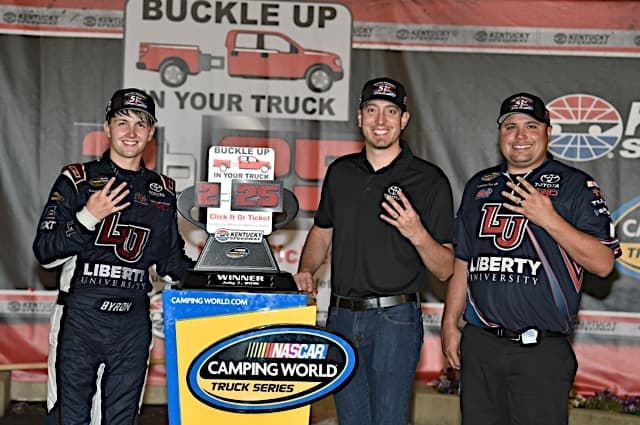 In a Nutshell: William Byron scored his third win in the last four races and his fourth overall when he took the checkered flag 0.190 seconds ahead of John Hunter Nemechek in thursday night’s Buckle Up in Your Truck 225 at Kentucky Speedway. Byron held off a hard-charging Nemechek and Daniel Hemric in the final 42 laps to take the victory. Hemric finished third, followed by Christopher Bell and Johnny Sauter, who rounded out the top 5.

Who Should Have Won: Simply put, there’s no stopping William Byron and the No. 9 team at this time. As strong as Erik Jones was last season, Byron and crew chief Rudy Fugle have hit on something special this year. After qualifying third, Byron led a single circuit over teammate Daniel Suarez early on but was in command for the final 69 circuits.

Just 58 laps into thursday night’s race, Kyle Busch, who was mired deep in the field after repairs to his truck when the splitter was dragging the track and the ensuing penalty for too many crew members over the wall, spun off of the right front corner of Spencer Gallagher’s No. 23 truck. the loser in a three-wide battle with Gallagher and Jordan Anderson, Busch’s truck was terminally damaged in the wreck; he finished 30th.

“We were going down the backstretch and Spencer checked up because he saw a hole in the bottom and went to the bottom, because he thought he could get there,” Busch said. “Yeah, Jordan Anderson kept his foot in the gas and didn’t check up but if you’re going to do that, you’ve got to stick to your original plan and do what you planned on doing.

Gallagher took responsibility for his role in the wreck but was none too pleased.

“We got taken three-wide [by Jordan Anderson] for no good (expletive) reason, fighting for 16th,” Gallagher said. “We got loose as hell and I wrecked Kyle.

“I feel terrible. that’s the last thing I want to do is wreck Kyle Busch for freaking 16th place. Lap 60. that’s one of the dumbest things I’ve ever been a part of in racing. I just don’t understand why we were put in that situation. I’m very distraught about that.”

I guess I saw the incident a little different than Gallagher and Busch did. It looked to me that Anderson got one heck of a run going into the corner and put his truck in the hole that was there on the track. There wasn’t any contact between Gallagher and Anderson, and it appeared the air disturbance that often plagues these trucks in two- and three-wide battles got Gallagher loose, spinning the Busch on the outside.

While I can understand Gallagher’s frustrations, it seems like his blame is a little misplaced there. And to expect that someone won’t take the opportunity to go three wide when the hole is there is just asinine and not in the true spirit of what racing should be all about.

While John Wes Townley sat out of thursday night’s race for a possible concussion, Parker Kligerman, whose No. 92 Ricky Benton Racing team opted to sit this week’s event out, was tapped to pilot the No. 05 Chevrolet for Athenian Motorsports. In Townley’s place, Kligerman excelled, leading the first of two practice sessions on Wednesday, before backing it up with a sixth-place qualifying effort.

When the green flag flew, Kligerman looked racy through the early run on the slick track, but handling woes kept him from being truly competitive. To make matters worse, a blistered tire forced him down pit road under green, where he went two laps down and never recovered. Kligerman finished 19th, one lap down in his sub role.

“First and foremost, obviously we’re hoping JWT has a speedy recovery,” Kligerman said. “this is not the circumstances you want to get in a truck this good, but it’s cool nonetheless to have the opportunity. After practice and qualifying I was really confident,” Kligerman said. “I think [(James) Villeneuve, Crew Chief] and all of these guys did a great job with this Jive Chevy. “We were crushing it in practice and qualifying. I felt like we had a shot at the pole, but I just got a little tight.”

“I’ll be back in the No. 92 at Bristol,” Kligerman continued. “that’s going to be our next race. We’re going to do, probably Talladega, Martinsville, we’ll decide on one or two of the three mile-and-a-halves, and Homestead. I’ll definitely be at that.”

Bummed to say the least. @RedHorseRacing gave me a fast truck Lady Luck just wasn't on our side tonight. Proud of the effort though!

No. of Rookies to Finish in the Top 10: 2; William Byron, finished first; Christopher Bell, finished fourth

A heck of a night for our team @LibertyU @ToyotaRacing. We broke the record, 51 Wins for @KBMteam! Glad to be a small part of it

Had a great run tonight from 16th to 2nd. Needed a few more laps and I think we could have got them. In the mean time #PrayForDallasPD

Disappointed, lying if I said any different……Hate I couldn't get it done for my guys, but we are putting ourselves where we need to be.

Really good night tonight. Another top 5 for my @JBLaudio @ToyotaRacing @KBMteam guys. And @EldoraSpeedway IS NEXT!!! ??????

Up Next: the Camping World Truck Series will sit idle until Wednesday, July 20 when teams take to Eldora Speedway for the annual dirt race. Coverage for the Aspen Dental 150 begins with qualifying at 5:15 p.m. ET on FOX Sports 1; the race can also be heard on your local MRN affiliate and SiriusXM NASCAR Channel 90.